There are no ‘throwaway lives’: Catholic leaders respond to Covid-19 behind bars 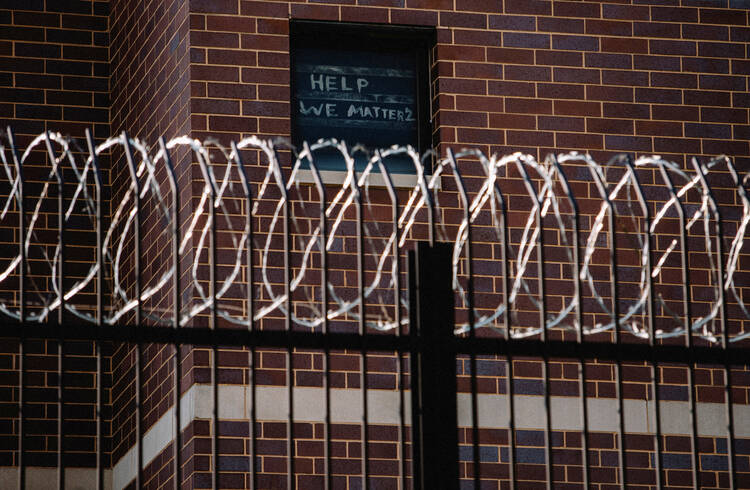 The unequal impact of the coronavirus pandemic has in just a few weeks made itself obvious; Covid-19 mortality has been far graver among low-income workers now deemed “essential” and within African-American, Hispanic and Native American communities where medical services have been notoriously weak.

Another near-invisible community similarly faces a serious and disproportionate threat from Covid-19: the people who live and work behind bars in the United States. The disparity has come to the attention of the U.S. Conference of Catholic Bishops and other national Catholic leaders. “We are deeply concerned that experiencing Covid-19 from behind bars could, for some, mean a de facto death sentence,” they wrote in a statement released on May 19. Church leaders who signed the “Statement of Solidarity: A Catholic Response to COVID-19 Behind Bars” say that reports of inadequate testing suggest measurements of the impact of the coronavirus among the nation’s incarcerated “are incomplete.”

“Pope Francis urges all of us not to forget those in prison and detention,” they note. “No matter the harm one has caused or suffered, every person is made in the image of God and should be treated with dignity and respect.”

Signatories include Mary Haddad, R.S.M., the president and chief executive officer of Catholic Health Association, and Donna Markham, O.P., the president and C.E.O. of Catholic Charities USA. They joined U.S.C.C.B. committee chairs and other U.S. church leaders in calling for an immediate response to the growing crisis among the nation’s incarcerated and the people who guard, protect and care for them.

“Pope Francis urges all of us not to forget those in prison and detention. Every person is made in the image of God and should be treated with dignity and respect.”

“Covid-19 has affected every community, especially the most vulnerable among us,” the statement reads. “The pandemic is particularly devastating to those living and working in prisons, jails and detention and re-entry centers where close quarters have resulted in a dangerous spread of the disease.”

“The challenges brought by Covid-19 are unprecedented,” said Krisanne Vaillancourt Murphy, the executive director of the Catholic Mobilizing Network, who was among the statement’s co-signers. “We came together as a Catholic community to voice our collective solidarity with individuals living and working behind bars who are suffering from the coronavirus pandemic in wholly unique ways.”

According to the U.C.L.A. Law School Covid-19 Behind Bars Data Project, more than 32,400 incarcerated or detained individuals have contracted Covid-19 and 425 have died. Among staff, almost 9,500 have become ill and 42 have died. The risk of infection in prisons, jails and detention centers outpaces that of the general population, in part, because of under-resourced medical facilities and limited capacity for isolation inside, according to the Catholic Mobilizing Network, the church’s national anti-death penalty advocacy group.

The “Statement of Solidarity” calls attention to these disparities and includes a reminder from Pope Francis that “there are no ‘throwaway lives.’”

In recent days, some high profile, nonviolent offenders, including the former chairman of the Trump campaign, Paul Manafort, and the president’s former personal attorney, Michael Cohen, and hundreds of others have been released to home confinement from federal detention because they were deemed especially vulnerable to the pandemic. According to the Prison Policy Center, over the last two months, local governments across the United States have responded to the pandemic by drastically reducing their jail populations, releasing nonviolent offenders held before trial and others whose underlying health conditions made them especially vulnerable to Covid-19.

The risk of infection in prisons, jails and detention centers outpaces that of the general population, in part, because of under-resourced medical facilities and limited capacity for isolation inside.

The P.P.I. reports that jails across the country have reduced population by more than 30 percent. But state prisons—“where social distancing is just as impossible as in jails, and correctional staff still move in and out every day”—have been much slower to release incarcerated people, reducing their numbers by only 5 percent.

According to the initiative, while jails continue to make quick changes to respond to the pandemic, they house only one-third of the U.S. incarcerated population; the other two-thirds are held by state and federal authorities, “who are moving far too slowly.” The U.C.L.A. project reports that 42,993 inmates have been granted early release from U.S. jails and 24,356 have been released from state prisons.

The statement from church leaders calls for attention to the unique spiritual and practical problems created by the crisis, including the inability of chaplains and ministers to visit the incarcerated to deliver sacraments, “notably the Anointing of the Sick and the Eucharist, or to offer spiritual support.”

Attorneys likewise have been unable to meet with the people they represent, and thousands of prisoners face more intense isolation than they were already experiencing as family visits are canceled and virtual meetings remain unaffordable to them. Many are being kept in solitary confinement as a last-ditch effort to curtail the spread of the coronavirus in a facility where an outbreak is occurring.

And those allowed an early release because of the crisis face unprecedented challenges in reconnecting with their communities and restoring themselves to society, according to the statement. “Similarly, released immigrant detainees can encounter tremendous obstacles in receiving adequate access to care and transportation to be reunited with loved ones, and need social support to ensure compliance with immigration proceedings and successful community integration,” signatories argue.

They add: “We also continue to urge political leaders to make all efforts to ensure the health, safety, and spiritual well-being of those inside, including correctional and detention staff.... As a church, we are being challenged to creatively consider ways to be present to people behind bars and to those returning home—to see each other’s wounds, meet their pressing needs, and to become agents of God’s restorative work in the world.”