Lebanon’s economy was already reeling. Coronavirus may push it into collapse. 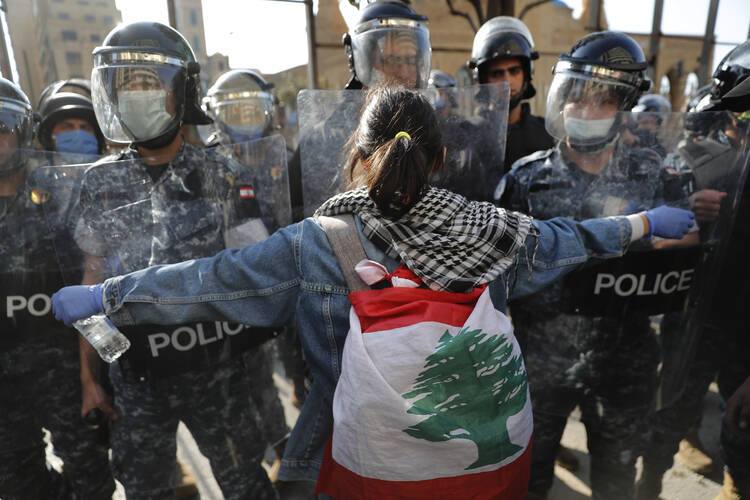 An anti-government protester confronts security during a protest against the deepening financial crisis, in Beirut, Lebanon, on April 28. (AP Photo/Hussein Malla)

This is the second in a three-part series looking at the potential global impact of Covid-19. Look for other reports from Liberia and India.

In Beirut, Dr. Rita Rhayem and her team at Caritas Lebanon have so far been able to carry on against a mind-numbing series of economic and political catastrophes that have consecutively staggered the nation. Lebanon already hosts large numbers of Iraqi and Palestinian refugees, but since 2011 it has accepted the world’s largest per-capita gathering of Syrian refugees; 1.5 million Syrians are now scattered in communities and makeshift camps across the nation. Since October, citizens exhausted by the government’s ineffectiveness and corruption have taken to the streets in protests that have at times turned violent.

The economy was already reeling before the coronavirus. Now with a nationwide lockdown, Lebanon is experiencing widespread unemployment and as much as 75 percent of the population is in need of emergency assistance; its currency, pegged at a fixed rate to the dollar since 1997, has lost 60 percent of its value in just a few weeks.

“We are dealing with one crisis at a time,” says Dr. Rhayem, “and right now we’re thinking about coronavirus, and once this pandemic is over, we are going to have to face the huge reality of the economic crisis and the potential collapse of our economic system.” Many here have been out of work since October, she says, and now with the lockdown there is no end in sight to their struggle.

“Lebanon is a country prone to disaster,” Dr. Rhayem says, speaking from Beirut. “We have been in an emergency mode since I don’t know when, so this is becoming the normal life for us—which is unfortunately sad, but this is the reality.”

“We are dealing with one crisis at a time,” says Dr. Rhayem, “and right now we’re thinking about coronavirus, and once this pandemic is over, we are going to have to face the huge reality of the economic crisis.”

Her Caritas staff and volunteers have quickly adapted to the latest challenge, securing personal protective equipment, sanitizing offices and rearranging service schedules and procedures to account for social distancing protocols mandated by the government. “We changed the types of services we provided; we changed the schedule; we changed the way people access our center; we changed how many numbers of staff are there to stop this virus spreading,” she says, “but we could not stop the services.”

With so many out of work, food distributions have become the primary outreach, but now instead of offering food pick-ups from the Caritas office, volunteers prepare food baskets and deliver them to the community door-to-door. The volunteer teams work 14 days, followed by 14 days off in quarantine, to reduce the exposure risk for themselves and the people they are trying to help. “No one is allowed to leave the offices or food distribution area without P.P.E.,” Dr. Rhayem says. The food items and baskets, she added, are disinfected before they depart from distribution points. “Every item is sanitized,” she emphasizes.

Both her staff and volunteers have been able to overcome their personal fear of infection, she says, because they are so moved by the piteous state of so many neighbors who once had decent jobs and basic dignity.

“I guess when you see this as not only your duty, but your mission,” Dr. Rhayem says, “when you are in the middle of the crisis, you don’t think of yourself. You think: ‘What can I do to help the others who are around me?’” She struggles against burnout by staying focused on how important each of the scores of small decisions she makes each day will prove to be in maintaining the resources Caritas will need to keep doing its work. Responding adroitly to the fluctuating price of personal protective equipment has been a daily obsession, she adds.

Her team of professionals and volunteers are largely Christian, but they come from all of Lebanon’s faith communities and serve all its faith communities—Muslim, Christian and Druze. This is something Caritas is well known and respected for, she says. In Lebanon, she says, when one asks a friend for a big favor, “What am I, Caritas?” is a well-worn sardonic response whether one is a Christian, Sunni or Shiite.

Their work includes humanitarian assistance to the Syrian refugee camps where Dr. Rhayem fears the coronavirus may already lurk. Covid-19 reaching the refugee communities, where health services are poor and social isolation impossible, is “definitely the worst-, worst-case scenario that we hope we will not have to deal with,” she says. With a widespread outbreak in those informal settlements, “definitely our health system will collapse,” she says.

She hopes the world remembers Lebanon as the crisis deepens, especially its commitment to humanitarian principles. It did not turn away from its responsibility to its neighbors even as its own troubles grew worse.

“Receiving this high number of Syrian refugees,” Dr. Rhayem says, “and the fact that we keep welcoming them, is an important message to be sent to everyone, especially to countries which are much richer than Lebanon and have more resources than Lebanon.

“We are helping our country to maintain, to sustain and, hopefully, someday we are going to get out of this economic crisis,” she says, “and then we will look back and we will be so proud that this is what we have done…that we have been part of Lebanon’s history.”

Read the first report on conditions in Liberia. Tomorrow: A stand for solidarity in India