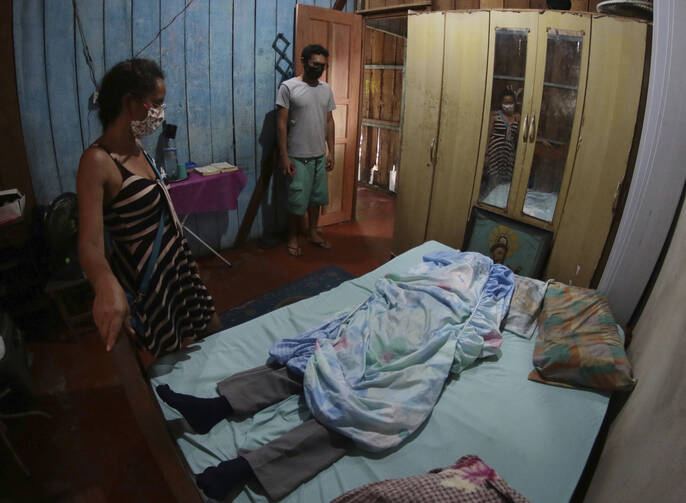 Relatives stand next to the body of Raimundo Costa do Nascimento, 86, at his home in Sao Jorge, Manaus, Brazil, on April 30. According to the family, Costa do Nascimento died of pneumonia and had to wait 10 hours for funerary services to come pick up his body. (AP Photo/Edmar Barros)

Brazil has become one of the countries where the coronavirus is spreading most quickly. While the number of deaths has exceeded 12,000 and is rising rapidly, national and local governments so far have not been able to create a collective response against the pandemic. Noting this “disunity,” the president of the National Conference of Bishops of Brazil, Archbishop Walmor Oliveira de Azevedo, said: “Many authorities trivialize the effects of the pandemic and ignore that many hospitals are overburdened.”

In an exclusive interview conducted over email with America, Archbishop Azevedo criticized Brazilian politicians “in different positions of power” who have “minimized the effects of the pandemic.” The archbishop of Belo Horizonte has been one of the church’s most outspoken voices during the pandemic.

Without explicitly mentioning Brazil’s president, Jair Bolsonaro, but answering a question about the response so far by the federal government, Archbishop Azevedo claimed that “there is a mismatch between the guidelines that come from health authorities, based on science, and the behavior of those who have the greatest responsibility to lead the country.”

Archbishop Azevedo criticized Brazilian politicians “in different positions of power” who have “minimized the effects of the pandemic.”

These government authorities “seem to ignore the situation of hospitals, of people who, most likely, will die without dignified medical care,” he said. Although access to the public health system is free in Brazil, systemic inequalities persist. The lack of resources can be especially severe in poorer and rural areas.

“Brazil is shamefully on its way to becoming the new epicenter of the pandemic,” the archbishop said. The first Covid-19 case was recorded in Brazil on Feb. 25. A few days later Mr. Bolsonaro called the disease a “little flu.”

“Statistics show that Brazil, unfortunately, is not managing to slow down the spread of Covid-19, with some regions experiencing a more serious situation than others,” Archbishop Azevedo said, adding that he is concerned about the attitude of many citizens who do not recognize the severity of the disease.

“Some people think they are immune; they do not consider themselves responsible for the health of their neighbor, who is a brother or sister. They go to the streets without a mask; they crowd. Citizens’ behavior will tell us at what speed and under what conditions we will emerge from this pandemic,” he said.

The richest Brazilian states of São Paulo and Rio de Janeiro have the most Covid-19 cases, but the poorest regions in the north and northeast have fewer hospital beds, intensive care units and overall a more precarious health system. In isolated communities in the Amazonian region, for example, corpses are piling up and thousands of new graves have had to be dug.

Archbishop Azevedo: “Brazil is shamefully on its way to becoming the new epicenter of the pandemic.”

Mr. Bolsonaro is determined to keep the country’s economy running, and critics say he is undermining the effectiveness of social isolation measures. The president has removed two health ministers during the pandemic, Luiz Henrique Mandetta, an orthopedist, and Nelson Teich, an oncologist.

Dr. Mandetta was fired after relying on World Health Organization guidelines, promoting social distancing and engaging in dialogue with opposition governors. Dr. Mandetta, the president said, was “only on the side of life while I am on the side of the economy, as well.”

The second health minister, Nelson Teich, promoted flexibility on quarantines based on the number of cases in each region. Yet as the Covid-19 deaths went up, Dr. Teich signaled that social isolation was still necessary.

Despite this counsel, on May 11 the president issued an executive order allowing gyms and hairdressers to open as “essential services.” The minister was also against widespread prescription of hydroxychloroquine in patients with Covid-19. The president defends the prescription of chloroquine in spite of the lack of scientific evidence on its efficiency. On May 15, Dr. Teich was forced to resign.

According to The Lancet, Brazil now has the most Covid-19 cases and deaths in Latin America and is fighting the coronavirus using substantial underestimates of the disease’s impact. The United Kingdom’s Imperial College, which analyzed the transmission rate of the disease in 48 countries, put Brazil at the top three of the list on May 10, with a 2.0 rate—that is, each infected person is transmitting the disease to two other people. Puerto Rico scores 2.6 and Bangladesh 2.03. In the United States, the national rate is 1.1.

Last weekend, when the country’s death toll passed 10,000, President Bolsonaro said that he was planning a barbecue.

In other statements, the Brazilian president has attempted to minimize the importance of these rates. On April 28, reporters asked Mr. Bolsonaro to comment on Brazil achieving a higher number of deaths than China.

Last weekend, when the country’s death toll passed 10,000, Mr. Bolsonaro said that he was planning a barbecue for 30 people at the presidential palace. Faced with a social media storm, he stepped back from those plans, saying that he had joked about a “fake barbecue” and accusing the press of distorting his comments.

Practical decisions about combating the pandemic have been relegated to state governors and mayors, who complain about a lack of national dialogue since Dr. Teich took office. Some are asking for international help to buy medicines and respirators. In at least five states (Brazil has 27), more than 80 percent of the intensive care units are occupied.

Municipal lockdowns have been instituted in only a few cities, and most municipal authorities report struggling to keep the percentage of residents observing stay-at-home restrictions at 50 percent, far below the 70 percent target sought by health officials.

According to Archbishop Azevedo, the role of the Catholic Church in this complex political context is to urge a commitment to solidarity and special attention to the poor, the homeless and the groups most vulnerable to the virus, like the elderly.

“Social isolation today is a citizenship attitude, as it aims at a greater good,” the Brazilian archbishop said. “It is a gesture of love for the community.”

“This often requires us to be more demanding in appeals to those who define and decide public policies, so that their attitudes are marked by deep social sensitivity,” he said. “The church does not encourage clashes but harmony, based on a principle that must guide the world going forward, as there is no other possible way. This principle is that of solidarity.”

He also sees social isolation during this emergency as a gesture of charity, aiming to protect the weaker ones in society.

“Social isolation today is a citizenship attitude, as it aims at a greater good,” the Brazilian archbishop said. “It is a gesture of love for the community. Staying at home is a decisive attitude. It is not about passivity. On the contrary, it is a daily struggle against legitimate human needs—leisure, living with family and friends, more intense participation in the faith community.”

When the pandemic arrived in Brazil, its bishops hesitated to suspend public Masses, but as the situation grew worse most agreed to close down churches until conditions improve, and they have stuck by that decision. For Archbishop Azevedo, it is painful not to celebrate Mass, but he believes it is the right thing to do now.

“It is in these difficult times that we are challenged to give genuine witness to our faith,” he said. “I recall that in the past, Christians in Japan, due to religious persecution, were prevented for 250 years from celebrating Masses. Even so, they resisted. They kept the flame of faith alive,” he said. “It is a challenging time, but it also allows us to take care of a vocation in our homes that is essential: being house churches. I am convinced that the Eucharist will be celebrated with an even more mature faith.”

Besides the pandemic drama, Brazil is also experiencing a severe institutional crisis. Supporters of Mr. Bolsonaro have rallied against social isolation and called for the closure of Congress and the Supreme Court. The president spoke at some of the demonstrations. But tempers turned against the president after the minister of justice, Sergio Moro, resigned, protesting Mr. Bolsonaro’s decision to fire the head of Brazil’s federal police. Mr. Moro accuses Mr Bolsonaro of trying to interfere in political corruption investigations, which the president denies.

Archbishop Azevedo said these “anti-democratic” demonstrations are “regrettable, anti-constitutional and aggravate the situation in Brazil, which must unite to face the serious health crisis.” Even if disagreements are normal in democracies, “there must be respect for democratic institutions,” he said, meaning the parliament and the Supreme Court.

“[The] Brazil that managed, with much sacrifice, to go through a process of re-democratization [in the 1980s], cannot suffer from setbacks. Political and institutional instability further aggravates the effects of the pandemic,” Archbishop Azevedo said.

His archdiocese covers the region of Brumadinho, where, in January 2019, a dam at a mining operation collapsed, killing 259 people. Asked about the similarities between that tragedy, which he saw up close, and the current pandemic, he said that in both cases there are vulnerable people who suffer, whom the church visits and accompanies even before government authorities do.

Also, in both cases he sees the consequences of human predatory behavior toward the planet. “We cannot simply say that these tragedies are the work of chance or a punishment from God—which would be an even greater mistake. It is the human being, in his freedom, who follows crooked directions and unleashes these tragedies,” Archbishop Azevedo said. “Pope Francis reminds us: It is wrong to think that we will have a humanity that is always healthy when the world is sick.”