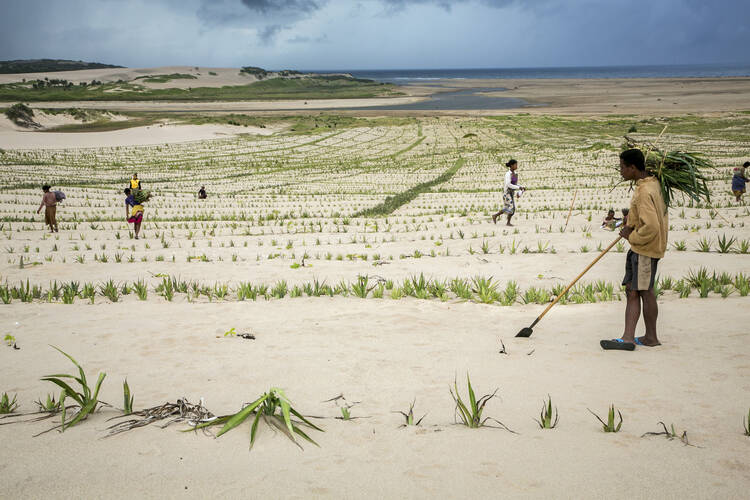 Community members plant sisal on sand dunes to stabilize them and keep them from blowing and moving onto the farm land near the village of Anjongo, Madagascar, March 22, 2019. Acute hunger is expected to double in vulnerable populations because of the coronavirus pandemic. (CNS Photo/Jim Stipe, Catholic Relief Services)

The Vatican Covid-19 Commission today, in a virtual press conference, highlighted the “interconnected” nature of the many challenges caused by the new coronavirus pandemic, including the problems related to the economy, employment, health care and protection of the environment. The task force was set up by Pope Francis to address the grave humanitarian crisis caused by the current pandemic and to influence the formation of the new post-pandemic world order.

The commission said these problems demand solutions through “creative solidarity,” and failure to address them in this way risks them recurring. It also called attention to the fact that hundreds of millions of people, especially in Africa and Asia, lack food or risk hunger because of the lockdown of two thirds of humanity in response to the coronavirus pandemic.

What will our world look like after the coronavirus crisis? That is up to us.
Ed Garcia

Cardinal Peter Turkson, the Ghanaian-born head of the task force and prefect of the Vatican Dicastery for Promoting Integral Human Development, said that in one of the task force’s recent meetings with Pope Francis, “he asked us to ‘prepare the future’ not ‘prepare for the future,’ that is prepare and anticipate it.” The cardinal explained how the task force works through its five commissions, and how it engages with the different offices of the Roman Curia, the local churches and Caritas Internationalis, as it seeks to give its input at the local and international levels.

The Argentinean priest, Father Augusto Zampini-Davies, whom Pope Francis recently appointed to the leadership of the task force and made joint secretary of the dicastery, recalled that even before the pandemic the Food and Agricultural Organization of the United Nations reported that 800 million people “remain chronically hungry,” even though much food is being “wasted” in the economically developed world. He added that “the demand for food is estimated to grow by 50 percent by the year 2050 [compared to 2010].”

Father Zampini said the lockdown required to stem the pandemic “is increasing food related problems.” Restrictions on food exports and imports are affecting supply chains; producers are struggling to get their supplies to the market. At the same time, socio-economic issues and conflicts persist and might get worse.

“The food crisis affects the most vulnerable people,” he said. The U.N’s World Food Program reports that “370 million children are at risk of losing school meals due to closures [of schools], which are usually the only meals they receive.” Furthermore, “climate issues continue to disrupt food production and agriculture with severe consequences for small farmers.”

Summing up the situation, he said: “We are facing a severe risk in food security. Food crisis causes hunger, hunger affects the poorest people and increases insecurity. Insecurity will lead to violence and more conflicts, which in turn will cause more poverty.”

But he added, “although Covid-19 has highlighted the fragility of our food systems, it is still an opportunity for change, both in consumption and production patterns, and in private and public actions. As ‘Laudato Si’’ reminds us, it is time for a deep and global conversion.”

He listed actions that need to be taken globally to change the situation. First, “accelerate improvements in agricultural productivity but link it with the protection of natural ecosystems and sustainable practices.” Second, “support the cause of the international community on food coalitions.” Third, “divert funds from weapons to food.” Fourth, “develop a set of emergency labor measures for people working in the agricultural sector.” Fifth, “support and promote policies which address the Climate Emergency so as to counter its effects on the poorest communities and countries, particularly its impacts on food production.”

He also suggested that each of us can help by seeking to “reduce food loss and waste,” “start changing our diets, eating seasonal food and avoiding high pollutant products.”

The International Community and Debt Relief

Mr. Aloysius John, the secretary-general of Caritas Internationalis, the confederation of 165 Catholic relief, development and social service organizations operating in over 200 countries and territories, said that Pope Francis told him, “at this tragic moment in history, I want the church to be present through the work of charity, and if you do not do it who will?”

He said Caritas Internationalis responded to the pope’s call by creating a Covid-19 response fund, and through its federation “is helping more than 7.8 million people in 14 countries, including Ecuador, India, Palestine, Bangladesh, Lebanon and Burkina Faso.” Furthermore, Caritas organizations in various countries have engaged in bi-lateral programs with Caritas organizations in particularly difficult situations and are helping 1.9 million beneficiaries, by funding programs totaling 9 million euros. Through projects in India and elsewhere, Caritas is helping families “with basic food assistance, hygiene kits, items like soap, diapers and cash assistance for subsidizing rents and other urgent needs.”

But, Mr. John remarked, “unfortunately there are hundreds of thousands more who need our help.” In this context, he mentioned Caritas South Africa, “which does not have enough food to distribute to the thousands of migrants who are lining up in front of its offices every day because they have nothing to live on.”

Caritas International has called for “the cancellation of the debt of the poorest countries.

He said Caritas Internationalis reiterates its appeals to the international community during the pandemic “to remove sanctions on Iran, Lebanon, Syria, Libya and Venezuela so that aid to the affected people can be guaranteed and so Caritas, through the church, can continue to play its role of support for the poor and most vulnerable.”

Father Zampini recalled that Pope Francis called for debt cancellation or relief when he addressed the United Nations General Assembly in Sept. 2015. He said the pandemic challenges all the financial structures and systems in this regard. He welcomed the fact that 37 countries have already received some debt relief, but he emphasized the need for “a new restructured system of debt relief.” He underlined the links between having a proper health system and a sound economy.

The Economy and Conflict Resolution

Monsignor Bruno Marie Duffé, the French born secretary of the dicastery, spoke about the efforts being made by the church to help the indigenous peoples of the Amazon region, who are particularly vulnerable to the pandemic as they lack any protection. He also drew attention to the need for the international community to give greater attention to climate change. In this context, he recalled that the Philippines has just been hit by another hurricane while under lockdown.

Several of the panelists responded to a question related to the fact that gig workers (in Italy called the “informal” sector, many of them undocumented), who are estimated to constitute about one-third of the world’s work force, are particularly vulnerable at this time because they have no job security. Father Zampini said one of these workers recently told him, “I have two choices: to stay at home under lockdown and so my family does not eat, or I go out to work to earn money for food and risk death!” He noted that the pandemic has made “visible” a problem that was kept “invisible,” and emphasized the pressing need for governments to address this injustice both from the health and economic security perspectives.

I have two choices: to stay at home under lockdown and so my family does not eat, or I go out to work to earn money for food and risk death!

Asked by America whether any efforts were being made by the task force or the Holy See, at the inter-religious level, to bring a stop to the fighting in Yemen where there is a major humanitarian crisis, Cardinal Turkson said the armed conflict was linked to the Sunni-Shia Muslim tensions. He said that, before the pandemic exploded, Saudi Arabia, a key party to the conflict, had for the first time proposed a meeting of religious leaders for peace in Riyad, the Saudi capital. He saw this as a positive step forward that might help end the conflict. Up to now, he said, the Saudis had always proposed that meetings of this kind be held outside the country.

The cardinal also responded to a question from America about the “forgotten war” in the Democratic Republic of the Congo, a conflict between groups over control of the rare minerals in the country, and whether there had been any follow-up to the call by the Secretary General of the United Nations and Pope Francis for a moratorium on such conflicts at this time of the pandemic. Cardinal Turkson recalled that after a recent visit to the country, he had come to the conclusion that the solution could be through giving the United Nations peace forces in the country the authorization to intervene to protect the people. So far, it has not been given that authority.