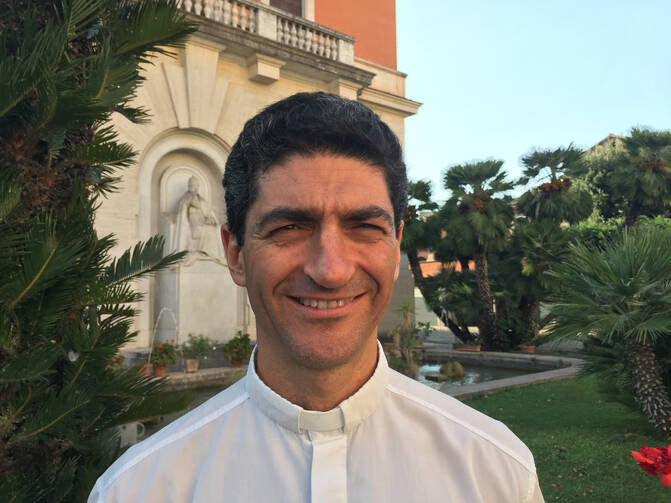 On April 8, Pope Francis appointed the Argentinian priest and theologian Augusto Zampini Davies as adjunct secretary of the Vatican Dicastery for the Service of Integral Human Development (S.I.H.D.), casting him into a key position in helping to formulate not only the Holy See’s response to the Covid-19 pandemic but also its input into the social and economic changes that will emerge in the aftermath of the crisis.

In this exclusive interview with America, Father Zampini said, “The future starts today, and we should be conscious that the decisions that are being taken by governments and world leaders in these months will shape the future of our world.”

Father Zampini believes that the present global crisis offers “an unprecedented opportunity for change, for a better, healthier and less unjust world.” He hopes that in his new post he can help the Holy See push for this.

Father Zampini: “We should be conscious that the decisions that are being taken by governments and world leaders in these months will shape the future of our world.”

And since no government or institution has truly clear ideas about what to do, he said, “this is a unique opportunity for the Holy See and the church to throw light on the situation [and to] propose ideas also regarding rescue packages that are being prepared to try to ensure that they don’t repeat the mistakes that were made in 2008, when the focus was on saving the big financial institutions. This time they must also work to rescue the people.”

He noted that while the 2008 global crisis was mainly economic, this crisis is economic and ecological, and it concerns health and food security, the need to guarantee that people have clean water, international security, cybersecurity, health care, employment and much more.

He explained, for example, that if the establishment of an adequate global health care system is to be addressed, the pandemic has shown that it will be necessary for resources to be transferred from other areas such as the investment in war and armaments. And it is necessary to end conflicts, as the pope and the United Nations Secretary-General have implored. Likewise, it is necessary to reduce or forgive the debt of developing countries to enable them to deal with the crisis and rebuild their economies.

Father Zampini emphasized that the question of work is central to the restructuring of the global economy. He noted that the socioeconomic indicators predict that many more millions of people could be out of work after the pandemic. He said that while those in the formal employment sector may have unemployment insurance to protect them, those in the informal sector do not.

Since a country cannot afford to have 40 to 60 percent of its population on welfare, there is a pressing need to find ways to create new jobs. But what kind of work can this be? It is necessary to think ahead, as the pope asked us, he said.

If the establishment of global health care system is to be addressed, it will be necessary for resources to be transferred from other areas such as the investment in war and armaments.

Father Zampini was already working in the dicastery (the Vatican’s term for “department”) for S.I.H.D. at the time of his appointment. When Pope Francis first established the dicastery in 2016, Cardinal Peter Turkson invited him to be coordinator of its unit for Development and Faith, which deals with economics and finance, labor and social movements, indigenous peoples, peace and new technologies. It also seeks to promote a development model based on faith values that is both inclusive and sustainable. The cardinal knew him well, he said, as they had met at several conferences in previous years about ecology and the papal encyclical “Laudato Si’.”

Then, as the Covid-19 pandemic swept across the globe, he said, Pope Francis felt the urgent need for the Vatican not only to respond to the health emergency but also to look forward, to see how it can best help shape the world that is being born today in the midst of the crisis. Francis entrusted the S.I.H.D. dicastery with addressing this task and convened meetings with its officials, including Father Zampini, to discuss the way ahead.

On April 7, Pope Francis phoned him and said he wanted him in the steering committee of the task force, headed by Cardinal Turkson, “to inject greater agility in the taking of decisions,” together with the French monsignor Bruno-Marie Duffé, the S.I.H.D.’s secretary. The committee responds directly to Pope Francis. Father Zampini described the pope as “a man on a mission at this moment in history.”

The task force has identified five areas to focus on, Father Zampini said. The first relates to the immediate humanitarian response to the health emergency regarding pastoral and humanitarian care for infected people and support for hospitals and the local churches. Caritas Internationalis coordinates this work in liaison with the relevant Vatican offices, and the Spanish-born undersecretary of S.I.H.D., Msgr. Segundo Tejado Muñoz, heads this unit.

The pandemic has resulted because of the way “we treat animals and how we treat nature,” Father Zampini said.

The second area involves analysis and reflection on what is happening in the world during the pandemic and what should happen afterward. Father Zampini led this unit before his appointment and continues doing so.

It is examining the ecological dimension of the pandemic and what is required to avoid future pandemics. This is a crucial area because the pandemic has resulted because of the way “we treat animals and how we treat nature,” he said.

Father Zampini sees the need for conversion and “radical change” in terms of the care of creation, as called for by Pope Francis in “Laudato Si’.” He is convinced that such change “is possible” now after people’s experience of the pandemic and the lockdown. His unit is working with various institutions including the Potsdam Institute for Climate Impact Research and the Pontifical Academies for Life and for Social Sciences.

Father Zampini said that his unit is collaborating with other public and private institutions across the world as well as universities such as Georgetown, the pontifical academies and social movements. It is collaborating with economic teams created over the past three years and engaging with leading economists such as Mariana Mazzucato of University College London, as well as young economists and entrepreneurs linked by a Vatican-sponsored conference called The Economy of Francesco. That conference was postponed because of the crisis, but it may convene in Assisi later this year.

The task force will also focus on communication, he said. Here the aim is to find ways to share the results of its analysis and reflection to the wider world and to collaborate with other organizations in doing so. Paolo Ruffini, prefect of the Vatican’s Dicastery for Communications, heads this effort, assisted by Cardinal Michael Czerny, S.J., the undersecretary of the S.I.H.D. for refugees and migrants.

Father Zampini sees the need for conversion and “radical change” in terms of the care of creation, as called for by Pope Francis in “Laudato Si’.”

The task force’s fourth important area of attention will center on the Holy See’s relations with states. Father Zampini explained that, as a small state, the Vatican has diplomatic relations with 183 states, interacting and sharing information with them. Since this involves the Secretariat of State’s Section for Relations with States, he said this operation is headed by that section’s undersecretary, the Polish Msgr. Mirosław Stanisław Wachowski, in collaboration with the Rev. Fabbio Baggio, an undersecretary of S.I.H.D.

The fifth area of focus for the task force relates to fund-raising, he said, not only to finance the work of the task force at a time when Vatican funding will inevitably be depleted because of the lockdown of the Vatican Museums (its main source of income), but also to provide assistance to local churches as they seek to respond to the pandemic in a holistic way. The administrator of S.I.H.D., Nicola Riccardi, O.F.M., leads this unit.

Father Zampini is well-qualified for his new, challenging role in the midst of an unprecedented crisis. Born in Buenos Aires in July 1969, he graduated with a law degree from the Catholic University of Argentina in 1993 and then went on to work as an attorney at the Central Bank of Argentina and later at the international law firm Baker & McKenzie.

“I discovered my vocation late, at the age of 27, when I went with a youth group to Salta,” in the north of Argentina, he said. He entered the seminary and was ordained in the diocese of San Isidro in 2004. He subsequently studied moral theology at the Colegio Máximo, Universidad del Salvador (2004-2006), and served in four different parishes, including Nuestra Señora de Fátima in Dique Luján, Tigre, a parish with many poor.

In 2005 he first met Jorge Mario Bergoglio, then archbishop of Buenos Aires (the neighboring diocese), who expressed interest in his work with poor young people and helped him in a concrete way by providing a new engine for the parish motor boat. But, he said, he only really got to know the pope during the Pan-Amazonian synod to which Francis had appointed him as an expert.

After working in parish ministry in Argentina, he was sent to England to do further studies in 2009. He obtained a master’s degree in international development and economics at the University of Bath in 2010, and a Ph.D. in theology at Roehampton University, London, in 2014, with a thesis that linked the development economic theories of Amartya Sen, the Indian economist and Nobel laureate, with the principles of Catholic social teaching.

He subsequently did post-doctoral research as a fellow at Margaret Beaufort Institute, University of Cambridge (2013-14). His area of expertise is moral theology, with a focus on economics and environmental ethics. He is an honorary fellow at Durham and Roehampton universities in the United Kingdom and Stellenbosch University in South Africa. Since 2004 he has lectured at different universities in Argentina and the United Kingdom.

While in England, he served in parishes in Bath and London and worked for three years as a theological advisor to Cafod, the U.K.’s international Catholic development agency in London. With Cafod he visited Sierra Leone at the end of an Ebola outbreak, as well as Ethiopia, Kenya, Bangladesh, Sri Lanka and Colombia.