9/11 led to a more militarized United States. Can we do better with Covid-19? 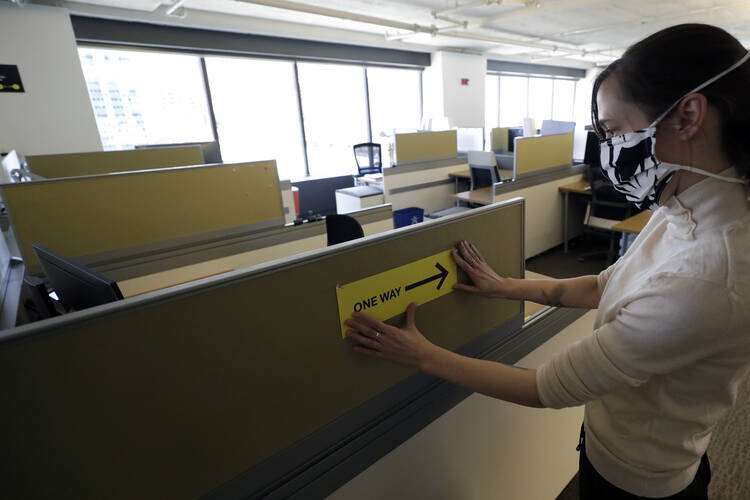 Stephanie Jones posts a sign mandating one-way foot traffic among the cubicles at the design firm Bergmeyer, in Boston, in response to the coronavirus pandemic. (AP Photo/Steven Senne)

Catastrophes reorient societies. It is too soon to say how the coronavirus pandemic, which is both a health crisis and an unprecedented economic collapse, will affect the United States going forward. But a reset is taking place. If only rhetorically, we are moving past the Post-9/11 Era.

Confronting the common enemy of a tiny virus invisible to the eye but more deadly than a bomb, people around the world have been brought closer together even as they stay at least six feet apart. We can hope that a new spirit of global cooperation is being born, that the “we’re all in this together” spirit prevails over the “let’s blame China” model President Trump is promoting. The case for it has rarely been more compelling. The biggest problems this country faces are what the rest of the world faces too: a global pandemic, a collapsing economy and the looming, growing crisis of climate change.

We can hope that a new spirit of global cooperation prevails over the “let’s blame China” model.

Scientists have linked the pandemic to microbes from animals jumping to humans, a phenomenon arising from rapid deforestation, intensive economic development and the encroachment of humans on wildlife. With 75 percent of emerging infectious diseases estimated to come from wildlife, scientists say more pandemics are likely. Inger Andersen, the executive director of the United Nations Environment Programme, told The Guardian in March that while curbing Covid-19 has to be the immediate priority, “our long-term response must tackle habitat and biodiversity loss.”

The need for a new model of sustainable economic development has never been clearer, nor has the need for global action to makeprogress on common problems. But will countries hard hit by the crisis move in that direction? Will the United States?

Doctors, scientists and researchers from different countries are sharing their experiences with the virus and are working to develop a vaccine against it, but other signs are not as positive. In late March, U.N. Secretary General António Guterres urged warring parties around the world to put down their weapons to focus on the bigger fight against Covid-19 and to allow desperately needed aid to reach those in danger from the virus. His appeal for a global cease-fire has been echoed by Pope Francis and dozens of religious and philanthropic groups. Last month the United Nations reported that more than 70 countries had signed on to Mr. Guterres’s call.

In response to the pandemic, the United States is likely to build on the repressive measures adopted after Sept. 11, expanding surveillance to monitor the movements of its citizens.

The United States is not among them. Instead, it has sought to block the Security Council’s adoption of the measure, fearing constraints on its military operations around the world. Ignoring calls to loosen sanctions on Iran and Venezuela during the pandemic, it has tightened them. Seeking a scapegoat for its tardy response to the coronavirus, the Trump administration is withholding funds from the World Health Organization at a time when the work of the organization is urgently needed.

Such outlier behavior has worsened under the Trump administration, but is not unique to it. A bipartisan consensus has existed for 70 years that the United States gets to make the rules of the game and it does not have to live by them. The attacks of Sept. 11, 2001, made this attitude lethal. Freed from the constraints imposed by the Cold War, we threw out diplomacy and international law and substituted militarism and force. Overkill was not just the effect but the intention. At home, we ignored the Constitution and the rule of law, justified torture and other violations of human rights, and established the surveillance society. The Obama administration put a stop to some of the most egregious abuses triggered by Sept. 11, but we are still living in the national security state formed 20 years ago.

In response to the pandemic, the United States is likely to build on the repressive measures adopted after Sept. 11, expanding surveillance to monitor the movements of its citizens. Other countries are already doing this, enlarging state power at the expense of democratic freedom and norms. (Also see “Around the World, Democracy Is at Risk From the Coronavirus.”) China, South Korea and Israel are using personalized location data to trace the movements of people infected with the virus and alert people near them. Singapore is reportedly utilizing a smartphone app that can trace citizens’ movements to within two meters of an infected person.

Even if we’re anxious to reopen the economy, we need to do it gradually.
Paul D. McNelis, S.J.

Around the world, democracy is at risk from the coronavirus
Bill McCormick, S.J.

The Wall Street Journal has reported that federal, state and local officials in the United States have turned to the advertising industry to track where large numbers of Americans are gathering. The recent economic relief bill passed by Congress includes $500 million for the Centers for Disease Control and Prevention to build a surveillance and data control system to stem the spread of the virus. Apple and Google announced in April they are partnering to develop a Covid-19 contact tracing app.

Privacy experts caution that location data can be very invasive. Last month, the American Civil Liberties Union published a white paper on the use of surveillance during an epidemic that noted extensive information about a person’s religious, political and sexual associations can be gained from his or her movements. Questions arise about what data is collected, how it is used, who gets the data and what is done with the data once it is collected. Even when well intentioned, efforts to stop the spread of disease come with dangers. Freedoms relinquished are seldom recovered.

Will international cooperation increase because of the current crisis? There are many good reasons it should. But the uptick in sympathy and solidarity individuals are experiencing will not translate into a friendlier or freer or more far-sighted world without struggle. Our rapidly changing future is unpredictable, but we can be sure that plenty of leaders will champion the aggressive unilateralism of the past. In all the worst ways, the path forward may resemble the path we’ve been on. Not internationalism, but acceleration of the trend toward authoritarian government could be Covid-19’s consequence.