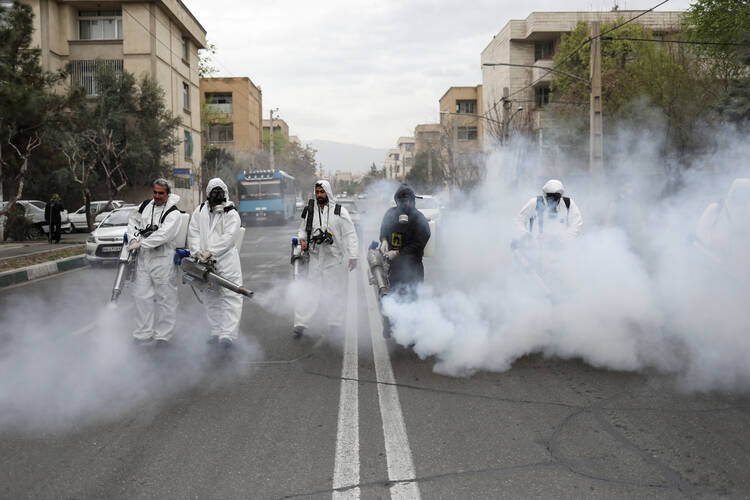 All over the world, people are extending themselves in courage to attend to the suffering of others as the coronavirus follows its indifferent course across borders. Nations may be separated by those imaginary lines, but compassion cannot end or begin at them. The global Covid-19 catastrophe offers yet another instruction in the interconnectedness of all people.

The global Covid-19 catastrophe offers yet another instruction in the interconnectedness of all people.

On March 22, an Iranian Shiite leader, the Ayatollah Seyed Mostafa Mohaghegh Damad, delivered a letter to Pope Francis imploring his intervention to end economic sanctions against Iran as it endures one of the world’s worst Covid-19 outbreaks.

The Iranian people, he wrote, “are struggling painfully with the loss of loved ones caused very often by the serious lack of medical resources due to the consequences of sanctions imposed by the United States.”

Suspending the sanctions regime he called “a humanitarian action” proper to those who believe in Jesus, who “for the whole world is a universal symbol of peace and love.”

Alas, Jesus does not make policy at the U.S. State Department, which has responded during this time of undoubted suffering in Iran by turning the economic screws even tighter. But the coronavirus crisis should not be viewed as a chance to press an advantage against an antagonist but a rare opportunity to risk mercy.

The coronavirus crisis should not be viewed as a chance to press an advantage against an antagonist but a rare opportunity to risk mercy.

The current sanctions policy does not prohibit the movement of humanitarian aid into Iran, but it does create logistical and financial barriers to commerce in much-needed medical supplies. Sanctions produce a haze of uncertainty that discourages most companies from trading even in permissible, life-saving goods with Iran.

Political realists argue that Iran’s leaders have done little to alter their behavior during the crisis and thus have not “earned” a respite from sanctions. But the relief of Iran’s people should not be held hostage to the deportment of Iran’s leaders. That degree of indifference to human suffering is unworthy of a great power, especially one that has repeatedly insisted that it is no enemy of the Iranian people. Now might be a good time to act as if that were true.

The relief of Iran’s people should not be held hostage to the deportment of Iran’s leaders.

In a letter shared with Fides, the Vatican news service, Elias Mallon, S.A., the external affairs officer for the Catholic Near East Welfare Association, reminds us that Christians do not seek the destruction of their enemies but reconciliation with them. If worst-case scenarios come to pass, as many as 3.5 million could die before Covid-19 completes its march across Iran. That is an intolerable and still, for now at least, preventable loss.

Carrying on through this crisis under the current sanctions regime may satisfy political hardliners, but it would be a pointless geopolitical cruelty and even strategically counterproductive. No country can be safe from the coronavirus as long as any nation is unable to resist it with all the resources it can muster or all the resources that, in mercy, can be shared with it.