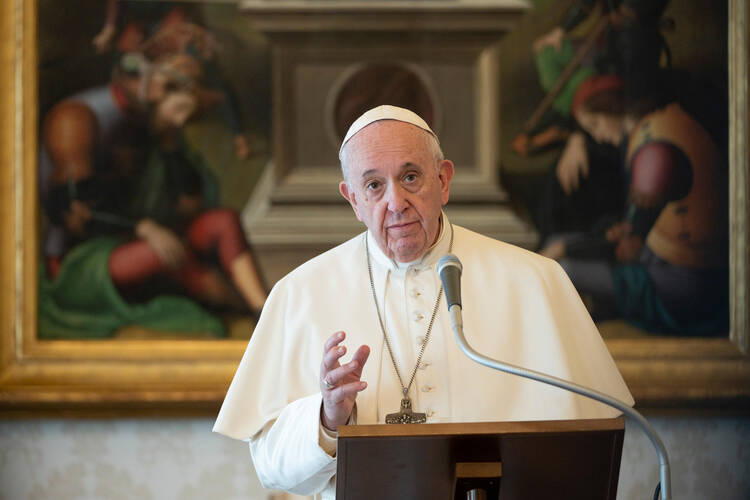 Pope Francis issued two passionate humanitarian appeals on Sunday, March 29, in response to the coronavirus pandemic. First, he joined the U.N. secretary general in calling for the cessation of armed conflicts “in all corners of the world.” Second, he called on governments worldwide “to avoid tragedies” that could result from the spread of Covid-19 in overcrowded prisons.

Speaking at midday from the Vatican’s apostolic palace, he prayed that “the common effort against the pandemic may bring everyone to recognize our need to strengthen the fraternal bonds as members of the one human family.”

On Monday, March 23, U.N. Secretary General Antonio Guterres appealed to warring parties “to lay down their weapons.” He said, “It is time to put armed conflict on lockdown and focus together on the true fight of our lives.”

In a message that was transmitted to a global audience by Vatican Media, Francis said, “I associate myself with all those who have accepted the appeal, and I invite all [parties in conflicts] to follow up on the appeal by stopping every form of warlike hostilities.” He called on leaders to facilitate the creation of humanitarian corridors for aid, to open avenues of diplomacy and to attend “to those who find themselves in situations of great vulnerability.”

Pope Francis joined the U.N. secretary general in calling for the cessation of armed conflicts “in all corners of the world.”

According to the 2020 report from the U.N. Office for the Coordination of Humanitarian Affairs, there were some 41 active armed conflicts over the last year, in places like Yemen, Syria, Libya, the Democratic Republic of the Congo and Venezuela. The global powers, including the United States and Russia, are involved in many of them. These conflicts have brought immense suffering to civilian populations, displacing tens of millions of people from their homes, reducing many to hunger and forcing people to become refugees or internally displaced persons.

Francis prayed that “the common effort” against the coronavirus pandemic that has led to a lockdown of almost half the world’s population, the infection of over 650,000 persons and the deaths of some 30,000 worldwide—more than one-third of them in Italy—would make people realize “our need for fraternal bonds as members of one only family.”

He expressed the hope that this global emergency may inspire the leaders of nations and armed groups to overcome rivalries. He reminded everyone that “conflicts are not resolved through war” and that “it is necessary to overcome antagonisms and oppositions through dialogue and a constructive search for peace.”

Pope Francis prayed that “the common effort” against the coronavirus pandemic would make people realize “our need for fraternal bonds as members of one only family.”

Francis, standing before a painting of the resurrection in the library where he meets heads of states and religious leaders, also made an appeal on behalf of prisoners worldwide.

Expressing his concern for those living in groups, such as in homes for the elderly and military barracks, the pope said he had just read an official report from the U.N. Commission for Human Rights “that speaks about the overcrowding of prisons, which could become a tragedy” if the coronavirus spread among this population.

“I ask the authorities to be sensitive to this grave problem and to take the necessary measures to avoid future tragedies,” Pope Francis said.

Earlier that day, at Mass in the chapel of Santa Marta, Francis began by saying, “I am thinking of the many people [worldwide] who are weeping” because of the pandemic: the elderly, people who are alone or in the hospital, parents who do not foresee receiving their salary and do not know how they will feed their children.

The theme of weeping was a central part of the Gospel read at Mass today, which recounts the story of the death of Jesus’ friend Lazarus, the brother of Martha and Mary. He recalled that when Jesus arrived at their home, Lazarus had been dead three days. Martha met him first and said, “If you had been here my brother would not have died.” Jesus told her, “I am the resurrection and the life, the one who believes in me, even if he dies, he will live.”

Commenting on this Gospel story, Francis said: “Here we touch with our hands that God is life and gives life, but he wants to take on himself the drama of death. Jesus could have prevented the death of his friend Lazarus, but he wished to make his own our sorrow at the death of people dear to us and, above all, to show the dominion of God over death.”

Pope Francis does not have Covid-19 but a sixth Vatican employee has tested positive, spokesman says
Gerard O’Connell

Pope Francis told his global audience: “God has not created us for the tomb; he has created us for life, a beautiful, good, joyful life,” but “death has entered the world through the envy of the devil, as the Book of Wisdom says, and Jesus has come to free us from its bonds.”

Applying this Gospel story to our lives, Francis said, “We, too, are called to ‘remove the stone’ from all that has to do with death,” including “the hypocrisy by which we live the faith,” “the destructive criticism of others” and “the pushing away of the poor.”

“Jesus asks us to remove these stones from our hearts,” the pope said, “and then life will begin to flourish around us.”

Pope Francis concluded his Angelus message this bright, sunny Sunday, by asking people to “remember to pray for me” and assuring them, “I pray for you!”

Then, as he has done on previous Sundays since the lockdown in Italy, he went to the study window of the papal apartment and looking out over the empty square, imparted his blessing to the world.