Even if we’re anxious to reopen the economy, we need to do it gradually. 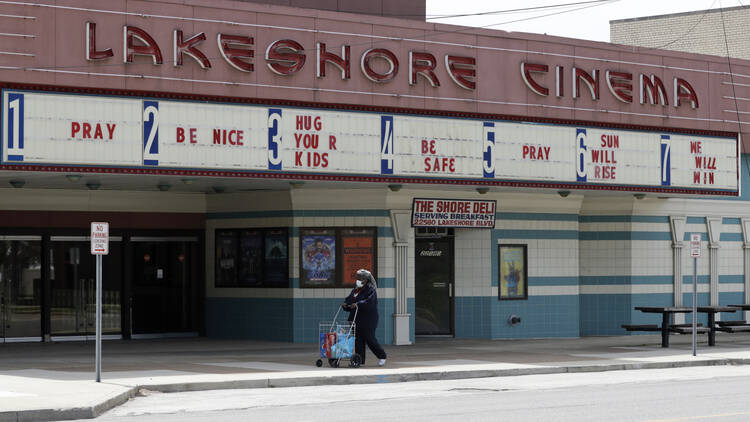 Should the U.S. economy reopen all at once or one screen at a time? A woman walks past the closed Lakeshore Cinema in Euclid, Ohio, on May 6. (AP Photo/Tony Dejak)

We are in a state of deep global economic crisis as a result of the coronavirus pandemic. What is the best way to deal with it? We have had other serious crises over the past decades, from hyperinflation in Latin America in the 1980s to financial crashes in Mexico and Asia in the 1990s to our own housing bubble circa 2008. Of course, they pale in comparison to our present dilemma.

There is usually considerable debate about the proper response to a global economic crisis. One option is gradualism, or piecemeal approaches, and another is what could be called shock treatment. For example, a gradualist response to hyperinflation would be to slowly reduce government budget deficits. Shock treatment would mean freezing wages, consumer prices or exchange rates.

We are now living in a highly controlled and subsidized economy, not the laissez-faire, highly competitive and decentralized market economy we had become accustomed to.

Most countries have faced up to the Covid-19 crisis with shock treatment, in terms of massive federal subsidies to households and small businesses. As a result, we are now living in a highly controlled and subsidized economy, not the laissez-faire, highly competitive and decentralized market economy we had become accustomed to. The key question is: How to plan for an exit from such a controlled environment? Do we exit gradually, or do we follow one shock treatment with another, trying to quickly go back to life as it was before?

State governments are as anxious as the federal government to get back to business as usual. For example, Georgia has already moved to reopen many businesses despite reservations from President Trump and polls showing that most state residents are wary of restarting the economy too quickly. But the role of the federal government in this current crisis is not clear. It can, of course, end federal subsidies to states that do not comply with guidelines. Or it can take stronger action, as when President Eisenhower sent troops to Mississippi to enforce federal desegregation mandates. We are in an ambiguous situation, with the federal government picking up most of the tab for assistance to unemployed workers and small businesses while the states decide restrictions on social distancing and most business activity.

Shock treatment in the form of massive federal spending is already here, but we do not know the risks of an abrupt return to economic life as usual. Of course, all public policy decisions, whether by federal or state governments, involve trade-offs, with some non-zero risks to human life. One example is the degree to which we regulate the use of automobiles. But without massive testing for the coronavirus, we will not know its true mortality rate, which means we have no idea of the likely costs in human lives if we quickly reopen the economy.

Without massive testing for the coronavirus, we will not know its true mortality rate, which means we have no idea of the likely costs in human lives if we quickly reopen the economy.

In this state of uncertainty, one way to get more information would be through natural experiments. Let a few states, as Georgia is now doing, return to normal economic life, and then compare Georgia’s mortality rates for the same period with states that maintain stay-at-home orders. We call this approach differences-in-differences; Abhijit Banerjee, Ester Duflo and Michael Kramer, recent Nobel laureates in economics, used this approach for comparing poverty alleviation policies across countries.

The problem with using natural experiments, of course, is that borders between states and other jurisdictions within the United States are wide open. The risk of one state adopting a return to normalcy through shock treatment is that increased mortality rates could quickly spread to surrounding states. What happens in Georgia does not stay in Georgia. We simply do not have the resources (and probably not the political support) to seal off state borders.

There is also the ethical issue of experimenting on a massive scale with human life. True, when testing the effectiveness of drugs, patients are subjected to controlled experiments in which some patients are given placebos and others a potentially effective drug. But such patients know what they are volunteering for, and the scale is not as massive as that of the population of a state like Georgia.

So the return to economic normalcy will more likely take the form of gradualism. We will be living in a partially planned or controlled non-market economy for some time, with considerable intervention by state and local governments. People working from home will continue to do so for months ahead, and education will continue online. Manufacturing will resume at a lower scale, with fewer workers employed and with greater care for their safety. Restaurants will reopen on a limited scale, with proper spacing at tables. Domestic airline travel will be limited with likely little or no long-haul international service until the end of the year, as immigration and customs services maintain tight controls.

What the Covid-19 stimulus package says about essential workers and our social values
Joseph J. Dunn

We are living in an apocalypse
David Dark

Such gradualism will be costly in terms of economic growth. Of course, there will be violations during this transition, and litigation is likely with respect to the rights of citizens versus specific controls in the states. There may also be other states like Iowa, which is pressuring people to return to work with the threat of cutting off unemployment benefits.

Until we get widespread and accurate testing or a vaccine, we have no idea what is the magnitude of the risks involved with an abrupt reopening. We Americans are an impatient people, guided by rugged individualism, as noted by the late sociologist Robert Bellah. This period of lockdown is the time to cultivate, as Bellah would suggest, habits of the heart, tempering our deeply ingrained rugged individualism with greater ethically informed social responsibility.