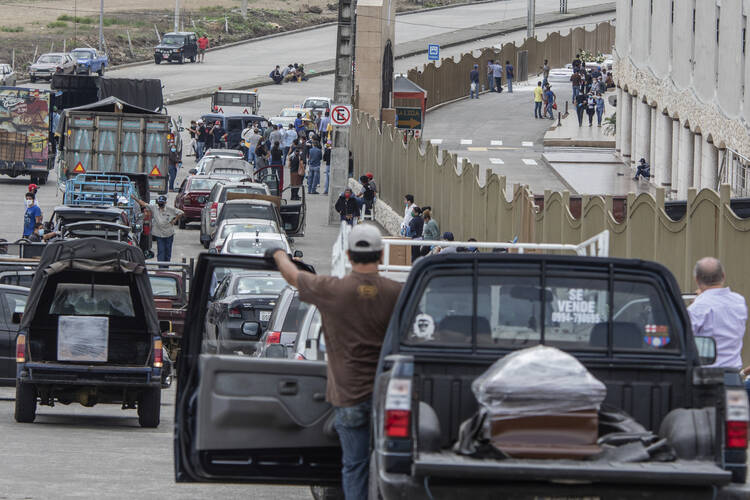 People transporting the remains of deceased loved ones wait in a slow moving line outside Jardines de la Esperanza Cemetery to hold burials in Guayaquil, Ecuador, on April 6, 2020. Guayaquil, a normally bustling city that has become a hot spot in Latin America as the coronavirus pandemic spreads, also has untold numbers dying of unrelated diseases that can't be treated because hospitals are overwhelmed. (AP Photo/Luis Perez)

The impact of the coronavirus pandemic in Latin America has been devastating for the poor. Not only are many suffering because of the collapse of regional and municipal healthcare systems in several countries, but the poor also have to face the most drastic effects of the economic crisis that has accompanied the pandemic. But in many countries members of basic ecclesial communities—known in Latin America as C.E.B.s, from the abbreviation in Spanish and Portuguese—are stepping up to assist the most vulnerable and to reflect on new paths for their societies once the pandemic subsides.

The Covid-19 outbreak began to accelerate in Latin America shortly after C.E.B. delegates from 16 countries gathered in Guayaquil, Ecuador, in mid-March for a continent-wide encounter—the 11th since the first forum of C.E.B.s took place in Volta Redonda, Brazil, 40 years ago. The meeting was an opportunity to contemplate the decades-long history of the movement and to plan strategy for the next few years. But shortly after the participants’ departure, the overpowering reality of the coronavirus pandemic presented more immediate challenges to C.E.B. members.

The C.E.B. movement has become well-structured in nations where it remains active. C.E.B.s “have two characteristics that can help to fight coronavirus and protect the poor,” said Brazilian theologian Leonardo Boff, who has been a major promoter of the movement since its inception. “They’re very well-organized and can make contacts, provide information and alert the people on precautionary measures.”

In addition, “they have a great sense of solidarity and collaboration,” he said. “Their members are generous to the point of putting their own lives in danger. They can organize a homemade production of masks and provide cleaning products for everybody in their region.”

The C.E.B.s have been assisting the most vulnerable victims of the pandemic on multiple levels. In El Salvador, they have been gathering food and money in order to prepare for a possible hunger crisis.

Indeed, the C.E.B.s have been assisting the most vulnerable victims of the pandemic on multiple levels. In El Salvador, they have been gathering food and money in order to prepare for a possible hunger crisis. “The official church gave insufficient responses to the crisis, limiting itself to cancelling the celebrations and telling the people to respect the government’s orders,” said Andreas Hugentobler, a Swiss-born theologian and a member of the C.E.B. movement in El Salvador.

He adds that the Salvadoran government has done little better, other than to deploy security forces to prevent people from leaving their houses and arresting dozens of people without seeking to address the other aspects of the crisis. “Two basic ecclesial communities [in the area around San Salvador] have been resisting militarization and taking food to homeless people on the street,” he said.

A massive movement in the Latin American Church, base eccelsial communities were a direct fruit of the transformations in Catholicism engendered by the Second Vatican Council and accompanied the development of liberation theology in Latin America. With a general absence of priests in the region, in small communities—usually poor villages or neighborhoods in the countryside or in the city—lay people started to organize and read the Bible together, establishing relations between Scripture and their own lives, according to Mr. Boff, and beginning a process of personal reflection that led to different roles in community direct service and advocacy.

“It was a new way of being church—a popular church with a popular culture, popular chants and a particular way of reading and commenting on the Bible texts,” Mr. Boff told America. The C.E.B.s soon organized as a network and a popular movement, operating on several fronts in the struggle for the basic human rights among the region’s oppressed people.

Celso Carias, a professor of theology at the Pontifical Catholic University of Rio de Janeiro, said that at the peak of the movement, in the 1990s, there were 50,000 C.E.B.s in Brazil alone. “Now they’re probably reduced to 20,000 in the country.”

“In the countryside, people still have beans and maize. But in the city, food prices are up and the people have ceased to work.”

“It has been weakened as a movement,” Mr. Carias, who represents the Brazilian C.E.B.s in the National Bishops’ Conference, said. “Their current strategy is to search for alliances with other churches and civil society organizations.”

Throughout Latin America, members of C.E.B.s complain about the decades-long opposition of their countries’ bishops to their efforts. According to Mr. Boff, Pope John Paul II feared “the C.E.B.s functioned as a Trojan horse for Marxism to step into Latin America.”

In El Salvador Mr. Hugentobler participates in a C.E.B. network that includes nine communities, three of them urban and six of them rural. “A few institutions asked us to help them distribute assistance. Due to our regional presence, we’re important allies for them,” he said.

C.E.B. members are concerned about the impact of the social distancing measures imposed by the Salvadoran government on the lives of the poor. “In the countryside, people still have beans and maize. But in the city, food prices are up and the people have ceased to work. Most of the poor earn a living with informal activities and now don’t have any money,” Mr. Hugentobler said.

In Guayaquil, local C.E.B.s are also dealing with hunger and police repression. The city is also the epicenter of the pandemic in Ecuador, with 5,384 confirmed cases and 181 deaths.

But according to the newspaper El Universo, an additional 374 people have likely died because of Covid-19. Many Ecuadorians believe that the true number of victims is even higher. In the first half of April, the local government registered 5,700 deaths more than the historical average.

The collapse of Guayaquil’s funerary system led the government to create a new cemetery in a poor, distant neighborhood called Monte Sinaí, where 30,000 families live on irregular land and in precarious conditions. “People say it’s a mass grave,” the Rev. Luis Enríquez told America, “but the government denies it.”

“The fact is this neighborhood has always been treated as a dump,” he said, noting that the local government apparently intended to continue to treat it that way—this time with corpses instead of garbage.

Father Enríquez has been organizing C.E.B.s in Monte Sinaí for four years. They have typically fought against evictions and struggled against extreme poverty. Now they are desperately trying to ameliorate the effects of the social crisis caused by the pandemic.

“The water here is the most expensive in town. How are people supposed to wash their hands if there’s no water?” Father Enríquez asked. He explained that, bereft of access to municipal service, Monte Sinaí residents rely on water trucks and typically pay by the barrel. As the crisis has deepened, municipal authorities have begun to freely distribute the water but in insufficient amounts, Father Enríquez said.

According to Norma Quito, a long-time coordinator of C.E.B.s in Guayaquil, movement members are very concerned with the survival of the people in communities like Monte Sinaí, given that a large percentage of them work as street vendors and are now not making any money because of the quarantine imposed by the government. Communities in other parts of the country, she said, have been sending aid.

Mrs. Quito explained that Ecuador’s C.E.B.s are working to establish new alliances with national and international movements in order to denounce the situation of the poor in Guayaquil. Meanwhile, Father Enríquez fears evictions will continue during the quarantine.

“That’s a real risk. The government is taking advantage of the situation to implement the measures it wants. A confined people can’t mobilize and protest,” he said.

In Mexico, the C.E.B. network has been functioning as a dependable system of mutual aid, organizing food distribution and facilitating access to assistance coming from the state, said Nathalia Carrillo, a member of a C.E.B. in Mexicali. The social distancing measures ordered by the government have aggravated poverty throughout the country, where there is a high rate of labor participation in the informal sector.

“There’s a growing need for food among many families, caused by the forced confinement of households,” she said.

That is also the case in Argentina, where the ecclesial groups have been offering assistance to poor neighborhoods and homeless people. “The C.E.B.s have taken part in that effort in many cities, including Mar del Plata,” said the theologian Francisco Bosch.

A delegate to the Guayaquil meeting, Mr. Bosch said that the C.E.B. members at the conference discussed the need to reflect on the new social voices in Latin America, in order to “accompany the current of fresh air brought by Pope Francis to the church.”

“He inspires new charisms and [ecclesial] forces,” Mr. Bosch said. “The C.E.B.s feel he’s a companion on their path.”

Among the most pressing challenges, Ms. Carrillo said, is the need to bring the younger generations into the movement. “We have to listen to the youth and to new social actors that emerged in Latin America.”

The Rev. Gilvander Moreira, a Carmelite priest who has worked with Brazil C.E.B.s since 1985, said the solidarity campaigns organized by the C.E.B. network in several countries in response to Covid-19 are a sign of their prophetic role as Catholic communities.

“The C.E.B.s seek to give testimony that another world is possible and necessary, one that recovers harmony with nature as the traditional peoples teach us,” he said.

“The C.E.B.s will keep denouncing agribusiness and the indiscriminate use of pesticides; the greedy mining companies; the agrarian injustice; the urban speculation; clericalism and sexism in the institutional church; racism, homophobia, and any other form of discrimination,” Father Moreira said.