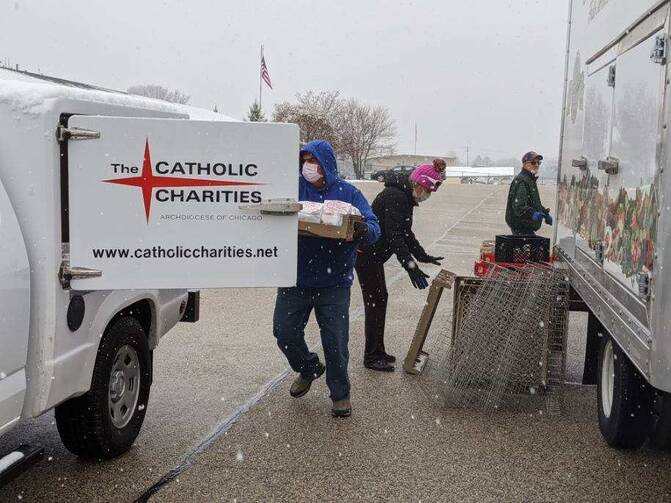 Earlier this month, Cardinal Blase Cupich announced the appointment of Sally Blount as the next chief executive officer of Catholic Charities of Chicago, one of the largest social services agencies in the nation, citing her “organizational and leadership expertise, profound faith and strong commitment to social justice.” The former dean of the Kellogg School of Management at Northwestern University and a former dean of New York University’s Stern School of Business, Ms. Blount will lead the agency during a time of economic turmoil that some economists predict could rival the Great Depression.

In an interview with America conducted April 24, Ms. Blount recalled how a stay at a Jesuit retreat house near her home began a process of spiritual discernment that resulted in her joining the Catholic Church in 2010. At the end of her tenure as dean of Kellogg, in 2018, she undertook a 30-day silent retreat and decided her goal would be to serve the church in some capacity. A member of the Archdiocese of Chicago’s finance board who also sits on the board of Abbott Laboratories, Ms. Blount said nonprofit organizations like Catholic Charities must prepare for dramatic societal changes that will span the next decade. Below is a transcript of the interview, which has been edited for clarity and length.

Sally Blount will lead the agency during a time of economic turmoil that some economists predict could rival the Great Depression.

Sally Blount: What we’ve got to figure out is, how do we do more? I think that’s what all social services agencies have to figure out. What I’m going to need to do is go in and understand what they are doing. What it may require is saying, we’re going to do less of this so we can do more of that.

I teach a course called organizational growth and transformation. What I know about organizations is that you have to constantly be pruning, just like a garden. Sometimes you have to let go of things you’re already doing so you can do more new things and do them better.

We’ll go through a process like that together. Because in order for organizations to be effective, they have to go through cycles of reflection and pruning.

We have to be ready to embark on a process to say, what does this mean for how we take care of people over the next decade?

Not just spiritually, but materially, this crisis isn’t just a one-year thing. This is going to completely shape life for the next 10 years—easily. We don’t have to figure it out tomorrow, but we have to be ready to embark on a process to say, what does this mean for how we take care of people over the next decade? I think there just has to be a willingness and readiness to ask that question.

MJO: You say this will reshape life for the next 10 years. Can you expand on that?

MJO: What role do you think business has in responding to the crisis?

SB: All social service organizations have to be thinking in new ways in order to increase impact and reach. You’ve got to have different models for thinking about how we might do that. I think there’s going to be some tremendous opportunities coming out of this crisis for building partnerships with businesses on trying to solve crucial issues.

At the same time, what had been heating up before this crisis was ESG, environmental, social and corporate governance. We’re finally killing the shareholder-primacy myth of maximizing shareholder value.

We’re beginning to create metrics of accountability for publicly held companies. How are you taking care of other stakeholders? That was already brewing. Economic inequality was at a problem point before this crisis. Coming out of this crisis, it will be worse.

Economic inequality was at a problem point before this crisis. Coming out of this crisis, it will be worse.

It is going to be in business’s best interest to make sure that we’re taking care of people so that we have a level of social stability that is critical for moving the country forward after this time. Because if we don’t, income inequality, combined with our political divide, could be extremely toxic.

SB: Catholic Charities isn’t a traditional business. Our mission has to touch both the people we serve and the people we rely on to fund the service. What makes them want to interact with us? At a very high level, it’s about transforming hearts. That’s what happens when you get a gift that you badly need, and that’s what happens when you learn how to give in the ways that Jesus calls us.

Catholic Charities isn’t a traditional business. Our mission has to touch both the people we serve and the people we rely on to fund the service.

MJO: You mentioned one of the aspects that got you excited was working with donors to help them see the value in the programming. What might that look like?

SB: I’m really intrigued by social entrepreneurship models. There are a lot of experiments being done in behavioral economics about ways to work with people in seasons of need that involve different kinds of interactions and different kinds of work, how we think about fees and pro bono services from people. Are people giving us money or, for example, are dentists giving us time in a chair? There are all kinds of ways to think about it.

MJO: You’ve written about the challenges that women leaders face in male dominated fields and the church is one of those fields. Do you have any thoughts on what it takes for women leaders in the church setting?

SB: I don’t have a huge sample set, but I have felt from the minute I first walked into that Jesuit retreat house that there was no sense of hierarchy between men and women. I have felt a sense of welcome from the Jesuits. I think that that’s important.

I’ve been in an archdiocese where the chief operating officer is a woman, so I know that it’s an environment that says if you have the gifts to serve the church and you feel called to do it, we will figure out a way how to use your gifts.

This is an amazing point in human history. The opportunity for impact, I’d argue, is profound.

I know that every single serious Christian faith has to struggle with, how do we live Jesus’ message of the New Testament in the 21st century? How are we called to adapt to the changing times and how much are we called to stick with what seemed to be the intention? I’m comfortable that the church is living that tension. I definitely feel called to be part of living that tension by being a very capable woman who is here to help.

I’m willing to play the long game and that’s obviously what the church is doing. I also believe quite honestly, that when we get it right, it’s not quite so important who says Mass or doesn’t say Mass. That’s just one piece. It’s about, do we use everybody’s gifts—and do we respect everybody’s gifts—regardless of gender, race, ethnicity? I see a lot of openness to that. I have a lot of admiration for Cardinal Cupich ’cause it’s very clear that he’s very open to that.

MJO: As you were learning about Catholic Charities, what stuck out that made you want to join the organization?

SB: I think it was the impact in scope. I’d had no idea that its services touch 700,000 people every year, that it was the largest private social services agency in the Midwest, and by some dimensions, it’s also the largest Catholic Charities agency in the country. The scale is what awed me and also drew me. When you’ve got something at scale, how do you make it run better? How do you make it even more effective?

MJO: Is there anything else I should have asked?

SB: The top line is that Catholic Charities of Chicago is an amazing organization with reach and impact. This is an amazing point in human history, which means we’re at a moment when we can really rethink what we do and how we do it for this next decade. The opportunity for impact, I’d argue, is profound.