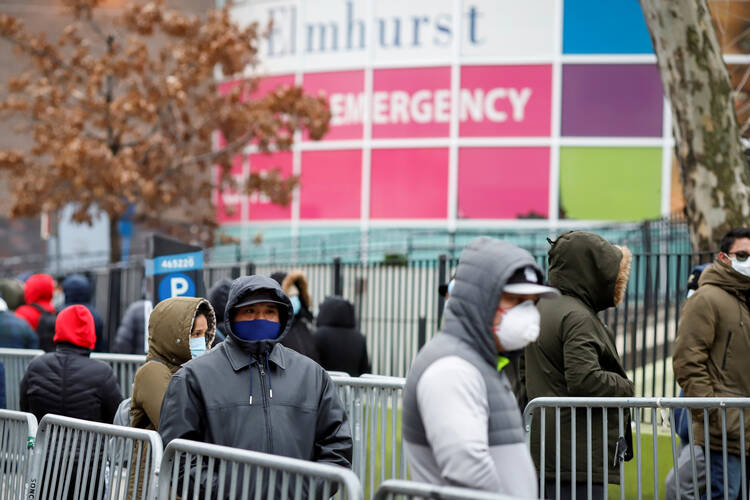 Each day in hospitals throughout the United States, Catholic chaplains visit patients, check in on doctors and nurses, and help family members grieve the loss of loved ones. A combination of priests, religious brothers and sisters, and laypeople, the roughly 2,500 Catholic hospital chaplains ministering in the United States are integrated into the medical teams at many hospitals, and they are responding to the chaos engendered by the coronavirus crisis in various ways.

Some are honing their skills at tele-chaplaincy in order to practice social distancing, others are brushing up on skills to support doctors and nurses, and some are simply taking a step back in order to protect others from the virus. Below, four hospital chaplains share their stories from the early days of what experts predict could be a months-long battle to contain the virus.

Father Radu Titonea, Queens, N.Y.
New York City has become the epicenter of the coronavirus outbreak in the United States, and no place has been hit harder than the borough of Queens. In addition to serving as the administrator of the St. Mary Romanian Catholic Mission in the Astoria neighborhood, Father Radu Titonea is a hospital chaplain at Long Island Jewish Forest Hills Hospital.

Normally, Father Titonea’s first priority is offering spiritual care for patients and their families. Even with the changes enacted because of the coronavirus crisis, some of that work continues. Families have been restricted from visiting the hospital, but Father Titonea, 38, still ministers to patients. But with the increased stress on doctors, nurses, tech workers and those keeping the hospital clean and functional, he has shifted his priorities, spending more time checking in on staff.

With the increased stress on doctors, nurses, tech workers and those keeping the hospital clean and functional, one chaplain has shifted his priorities, spending more time checking in on staff.

“You want to make sure that they are supported as much as possible,” he said.

While the workers put on brave faces and care for the growing number of patients with Covid-19, as well as patients presumed to have the infection, he hears the worry in their voices. They tell him about their fear that the virus might affect their families when they return home, anxiety about an expected surge of patients and worry over a lack of critical supplies.

Despite the challenges that await hospitals, especially as New York runs out of ventilators and intensive care unit beds, Father Titonea said he and the rest of the team also celebrate moments of hope. “Some patients are getting better, and that is that is an amazing thing,” he said. He pointed specifically to a patient who had been breathing with a ventilator because of complications from Covid-19 and was able to have the ventilator removed.

“Everybody was so happy,” he said. “We really needed that in order for us to stay strong and see the results of our work.”

Still, Father Titonea is aware of the challenges ahead. He points specifically to the fact that sick patients needing the assistance of ventilators are relying on them for longer spans than other illnesses require. That adds to the anxiety of the medical staff.

“You’re afraid that if cases are piling up in the back, then where are you gonna put those patients?” he asks. “You think you see improvement, slowly, but it’s taking them a long time. And everybody in the back of their minds thinks, ‘Okay, if we have a surge of patients, what are we going to do with them?’”

Hospital chaplains are well experienced with uncertainty. “We live in that world, of people not knowing what’s going to happen to them.”

Marie Coglianese, Maywood, Ill.
Hospital chaplains are used to working with people experiencing anxiety, especially when family members of sick patients seek spiritual support. Marie Coglianese, the regional director of spiritual care and education for three hospitals, including Loyola University Medical Center, located just outside Chicago, said there is a course of action chaplains follow when disaster strikes. In some ways, the coronavirus is simply another emergency and chaplains continue to provide care for patients and support for medical workers. But in reality, the pandemic is unlike anything the U.S. health care system, including its chaplains, has encountered in more than a century.

Hospital chaplains are well experienced with uncertainty, Ms. Coglianese said. “We live in that world, of people not knowing what’s going to happen to them.”

“That’s something that a week ago, two weeks ago, we didn’t have to think about,” Ms. Coglianese said. But her chaplain team has adapted, seeking ways to incorporate family into difficult moments.

“One of our patients was dying and their elderly mother and sister could not come in to see him,” Ms. Coglianese recalled. So she and another chaplain came up with a plan, calling the patient’s mother and sister and holding a prayer service. As the service ended, the chaplains held the phone up to the intercom so she could say goodbye to her son, who was shortly thereafter removed from the ventilator.

“It was a sacred moment in the midst of all this chaos that’s going around us, where this mother was able to say goodbye to her son,” Ms. Cogliansese said. “It brought much peace to her in these days of difficult decisions for the family.”

James Shaughnessy, S.J., Boston, Mass.
James Shaughnessy, S.J., has heard the anxiety from frontline hospital workers, many of whom tell him about their fear of the coronavirus. He feels it personally, too. If it were only about his safety, the 70-year-old Jesuit would continue his chaplaincy at a major Boston hospital and at a federal medical prison in Devens, Mass.

“This is a particularly stressful time to balance,” Father Shaughnessy said, noting the uncertainty about the virus and how that “affects not just me, but also the people I live and work with.”

He lives in a community with a handful of other Jesuits, who because they are over 60 and have health challenges, are a particularly vulnerable group. He and his Jesuit superiors fear that if he contracted the virus at work, he could spread it both at home and at the hospital, putting the health of frontline workers in jeopardy. He felt that anxiety acutely last week, when he ducked into a common workspace to join a video conference and noticed about six young doctors studying nearby.

“As I started watching and listening to what was pretty consistently alarming news, I thought, ‘What if I’m carrying the disease and there’s six young medical professionals within 10 feet of me?’” he said. “Could I be posing a threat to them? I just don’t want to be in that situation.”

“As I started watching and listening to what was pretty consistently alarming news, I thought, ‘What if I’m carrying the disease and there’s six young medical professionals within 10 feet of me?’”

So with those concerns in mind, and with new guidelines from the Archdiocese of Boston that prohibits priests over 60 from ministering directly to patients with Covid-19, Father Shaughnessy is stepping back from his ministry during the first wave of the outbreak. He said that if the initial wave sickens chaplains who continue to work in hospitals and prisons today, and if people are in need of a priest, he will re-evaluate his decision. But for now, he believes putting the health of others above his own desire to help is the correct response, even if that means praying separated by glass or the recommended physical distance.

“I’m learning that my prayers are powerful enough to be able to go through glass; [they are] powerful enough to reach more than six feet,” he said. “I've reassured families that I've [previously] visited that I can still pray for them.”

Jorge Maldonado, Melrose Park, Ill.
Hospital chaplains receive updates each day about the patients in their care, and Jorge Maldonado says that even as the number of coronavirus cases rise in Illinois, “there is confidence that we’re going to get through this.”

At Gottlieb Memorial Hospital, where Mr. Maldonado ministers, the staff have stopped him in recent days to ask for prayers or to express the anxiety they feel about the unknowns associated with the crisis. “One of the staff told me this morning she misses the family visiting patients,” he said.

Another staff member had been moved from another part of the hospital to a unit that requires personal protective equipment, such as gloves, gowns and masks, and she was nervous about making sure she was protecting herself and the patients. She asked Mr. Maldonado to pray with her. “They’ve never been in this scenario before, with all the precautions,” Mr. Maldonado said. “There are also feelings of uncertainty. They don’t know what’s going to happen in the next hour or the next day.”

For now, the hospital is not chaotic, Mr. Maldonado said. Patients seem to be staying away from the emergency department unless they need critical care, and doctors are trying to keep the hospital as clear as possible should the number of people needing treatment for Covid-19 increase. For now, he reminds anxious staff that things are under control.

“They’ve been told by managers that we are O.K. so far and that we’re hoping to make more equipment available as time goes on,” he said. “If we have more cases, we can have more equipment.”