Facing the fear: How Covid-19 and H.I.V./AIDS responses compare 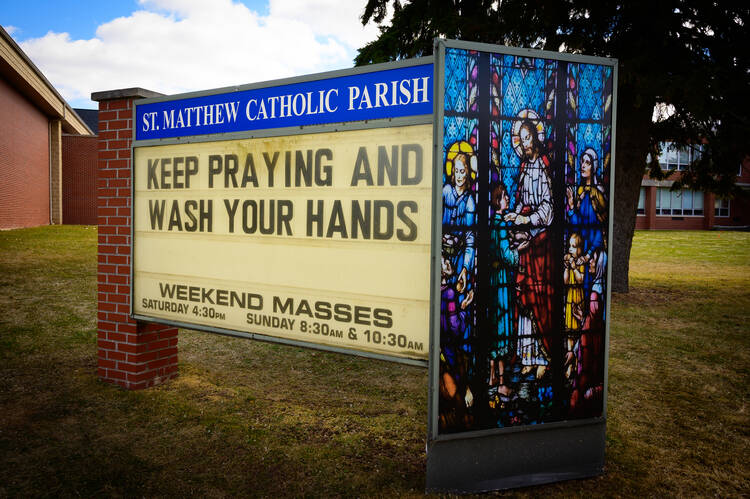 A sign outside of St. Matthew Church in Allouez, Wis., March 13, 2020, reminds people how to take care during the coronavirus pandemic. (CNS photo/Sam Lucero, The Compass)

Over the past week, I’ve been asked repeatedly at talks I have given about our new podcast, “Plague: Untold Stories of AIDS and the Catholic Church,” if I see parallels between what is happening today with the response to Covid-19 and what I learned during the dozens of interviews I conducted with those who lived and worked through the height of the H.I.V. and AIDS crisis in the United States.

I have been hesitant to draw too many comparisons. Medically, the afflictions are quite different, and AIDS in the early days appears to have been much deadlier than Covid-19 today. Socially, the stigma that affected early cases of H.I.V. and AIDS is largely absent today, though there are reportedly cases of bias-fueled attacks against Asian Americans. And politically, though the U.S. response is being criticized as inadequate by public health experts, we have seen officials respond by closing schools, banning large gatherings and even canceling the remainders of professional hockey and basketball seasons.

Still, I can’t help but notice some similarities, including the fear about the virus, the potential for social isolation for those who are infected and most at risk, the role that ministers might play in alleviating some of that suffering and the role that Catholic health care workers can play in speaking up for the marginalized.

Medically, the afflictions are quite different, and AIDS in the early days appears to have been much deadlier than Covid-19 today. Socially, the stigma that affected early cases of H.I.V. and AIDS is largely absent today.

First, the fear today is palpable. Stores have sold out of obvious items like hand sanitizer and less obvious items like toilet paper. People are afraid of the virus, and a lack of communication from government officials exacerbates the anxiety. One question I always asked the people I interviewed was if they could describe the sense of fear people felt in the early days of the H.I.V. and AIDS crisis. Many people had trouble describing the sense of foreboding and dread that they said permeated everyday life, but they all agreed it was there.

“There was a lot of fear and hysteria around AIDS,” Cliff Morrison told me, for example. Mr. Morrison was a nurse at San Francisco General Hospital and a parishioner at Most Holy Redeemer Parish in the Castro neighborhood, which we profile in the fourth episode of “Plague.” He said his antidote to fighting the fear was education, helping people understand the risks around H.I.V. and reminding them that fear was no excuse for bigotry or callousness toward others. Education about coronavirus and Covid-19 is essential today, especially the need for young, healthy people to take orders to avoid contact with other people seriously.

Another theme that repeatedly came up in interviews, especially with those who experienced an H.I.V. diagnosis in the early days, was isolation and loneliness. That phenomenon, of those most in need of comfort instead finding themselves alone and scared, certainly seems likely today.

Public health professionals have recommended social isolation for those with heightened risk of getting sick from the coronavirus, especially the elderly. This may lead to what Vox termed a “social recession,” which it describes as “a collapse in social contact that is particularly hard on the populations most vulnerable to isolation and loneliness—older adults and people with disabilities or preexisting health conditions.”

Education about coronavirus and Covid-19 is essential today, especially the need for young, healthy people to take orders to avoid contact with other people seriously.

Loneliness and depression can exacerbate existing illnesses, and Catholics who rely on the church for community, especially the elderly, may find that difficult if the pandemic worsens. Some changes that have already been announced will undoubtedly increase their sense of isolation.

Church leaders in many dioceses, including New York, Boston, Seattle, Chicago, Santa Fe, Newark and Washington, suspended public Masses, and anyone who has ever attended a Catholic Mass knows that the elderly make up a large segment of the congregation. Nursing homes are restricting visitors, which will only increase the loneliness many residents experience. The Centers for Disease Control said Mar.16 that gatherings of more than 50 people should be postponed for the next eight weeks, which means Easter celebrations will likely be canceled for many people, leading to more feelings of isolation.

Some Catholic Charities locations are ending gatherings for senior citizens, switching to boxed lunches and canceling group activities. Communities that already feel isolated will experience more loneliness, like during the height of the AIDS crisis, when fear created conditions that led to sick people becoming abandoned.

The Rev. William Hart McNichols, profiled in the third episode of “Plague,” understood the problem of loneliness back in the 1980s and ’90s and the need to minister to those in need, even with the fear of infection.

Loneliness and depression can exacerbate existing illnesses, and Catholics who rely on the church for community, especially the elderly, may find that difficult if the pandemic worsens.

He provided pastoral care to people with H.I.V. and AIDS back then, and he told me many of the people he visited were lonely and depressed, often rejected by their friends and families. He accompanied people anyway, undeterred by his own fear, in order to be with people as they faced illness and death.

For many people, Father McNichols was one of the only visitors they had in their final days. He said many of them did not have anyone else to talk to about their fears and worries or even to pass the time with. For believers, it was important to have a priest to provide the sacraments to them while they were in isolation.

Thankfully, this time there are encouraging signs that Catholic ministers are preparing to respond to the pastoral needs of those with Covid-19.

In the Archdiocese of Seattle, priests and lay chaplains “will continue to provide pastoral care to people who are homebound or quarantined,” though with enhanced protections in place, according to archdiocesan guidelines. Given the high risk of the disease to the elderly, only priests under 60 will be permitted to administer sacraments to homebound patients with Covid-19, and they must wear a mask and gloves and limit their time with the patient to 15 minutes. Ministers who are denied entry to nursing homes are encouraged to call those they were trying to visit in order to pray with them by telephone.

The Rev. Freddy Ocun is the head of pastoral care at Providence St. Vincent Medical Center in Portland. He also recently helped create an H.I.V. and AIDS clinic in his native Uganda. He told me on March 13 that it is imperative that chaplains let those suffering from Covid-19 and any other illnesses know that they are not alone.

“When there is a crisis, there is a lot of anxiety, and my role as chaplain is to bring calmness. And that’s what we are doing around this time,” he said. “Small things matter. When you tell people, ‘You are not alone, we are thinking for you, we are praying for you,’ people take those things very seriously.” He added that medical precautions must be taken, but whenever possible, being present in person and using touch is important. Otherwise, even checking in on the phone is better than complete isolation.

Thankfully, this time there are encouraging signs that Catholic ministers are preparing to respond to the pastoral needs of those with Covid-19.

Another parallel between then and now is that some Catholic leaders today are using their platforms to speak out on behalf of marginalized communities who lack a voice.

Catholic hospitals were some of the earliest to respond to the H.I.V. and AIDS crisis, especially in New York City. At St. Vincent’s Hospital in New York, the Sisters of Charity of New York and the AIDS clinic made it a point to ensure marginalized communities had access to H.I.V. and AIDS care.

The response was not perfect at first; some gay men reported harassment and verbal abuse at the hospital. But eventually the sisters listened to the community and figured out how to make changes so that all patients felt they were treated with respect. And once they got that right, the hospital expanded its services to reach those who needed help.

Dr. Ramon Torres told me in the second episode of “Plague” how the hospital staff went out into communities of homeless people to make sure they had access to medication and supplies.

Though efforts by Catholic agencies to help those on the margins affected by the coronavirus pandemic are still developing, there are signs that church institutions are preparing to respond. Some are already collecting cleaning products and hand sanitizers and distributing boxed meals rather than closing soup kitchens. As the economic impact of the pandemic become more clear—the impact of social distancing on employees in the hospitality and tourism industry is expected to be catastrophic—church communities may consider how they can assist those in need. On the national level, Catholic organizations are urging those in power to remember their responsibilities to the poor.

Last week, the Catholic Health Association, which represents hundreds of Catholic hospitals, nursing homes and other health care clinics, sent a letter to members of Congress urging them to pass legislation in response to Covid-19. The group called for free and universal testing for coronavirus, paid sick leave, nutrition assistance, child care for frontline workers and financial help to stop evictions.

Even with all the good that individuals and even institutions can undertake, the group’s president and C.E.O., Mary Haddad, R.S.M., recognized the need for collective action and a forceful government response, writing, “We ask for swift passage of legislation that can deliver the needed resources to save lives.”