From 1918: Army Chaplains and the Epidemic 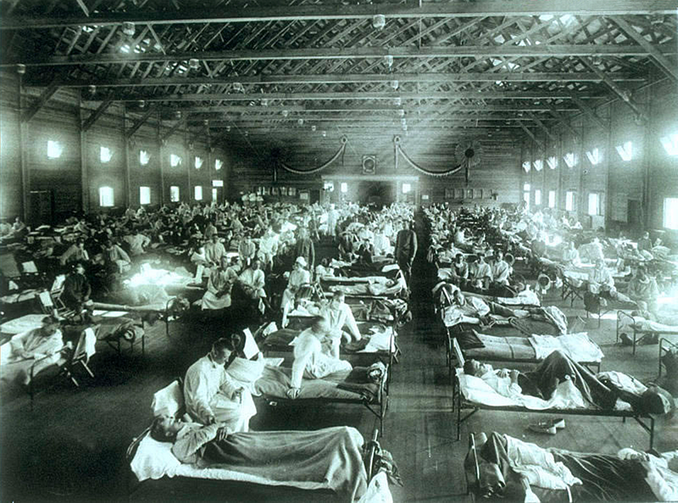 A hospital ward full of Spanish influenza victims in Kansas in 1918. (Image courtesy of the National Museum of Health and Medicine, Armed Forces Institute of Pathology, Washington, D.C.)

While World War I raged in Europe in January 1918, a pestilence almost as dangerous as the war itself broke out: the Spanish influenza. Over the next three years, a quarter of the world’s population was infected, and the death toll was estimated at between 50 million and 100 million. All over the United States, emergency hospital camps were set up to care for victims, and many Catholic priests served as chaplains in these camps.

Dispatches from Europe are constantly heralding the courage and bravery of one or other priest. His distinguished conduct under fire has been such as to cause even the callous newspaper correspondent, accustomed as he is to chronicle extraordinary facts, to deem him worthy of a prominent place in the public print. It may be the brief account of some French abbe’s exploit in which he showed such courage that the uncatholic French Government saw fit to confer on him its highest decorations. Or it may be the short, crisp recital of the award, by our own General Pershing, to some American priest, of the Distinguished Service medal for outstanding and conspicuous bravery. These messages, in which everybody delights, find a special welcome in Catholic hearts. We know that all our priests “over there” are doing their duty.

Shot and shell and gas bombs attract more attention than the hacking cough and the delirium and the hemorrhage of the influenza and pneumonia ward.

But the great epidemic of influenza is bringing to the army chaplains in our cantonments here [in the United States] the praise and honor that are their due. Shot and shell and gas bombs attract more attention than the hacking cough and the delirium and the hemorrhage of the influenza and pneumonia ward. But the priest who worked in the latter was just as much a hero as the one who labored amid the former. Both endangered their lives from a sense of duty, sanctified by love.

All the priests affected are now well and their weakness is only a reminder of the great things that they were able to do for God, for souls and for the Church. They are now cheered by the wonderful knowledge, gathered from a comparison of their records with the record of death, that God in His providence so disposed the relays of priests that not a Catholic died without the reception of the Last Sacraments. A beautiful and consoling thought and a mighty compliment to the kind of work done by Christ’s active and zealous ministers!

The great epidemic of influenza is bringing to the army chaplains in our cantonments here the praise and honor that are their due.

The foregoing recital of facts was made so that some practical and pertinent reflections and conclusions might be drawn from the data. First of all, a wonderful impression was created upon the doctors, nurses and orderlies and also on the Protestant patients by the splendid act of faith that showed clearly in the demand made by the hundreds of Catholic boys, white and colored.

The kindness of the priests towards the sick, their unselfish and untiring devotion to their duty and the wonderful spirit of faith displayed by the Catholic soldiers before and especially after the reception of the Sacraments produced very practical results among the non-Catholic soldiers, both white and colored. Twenty-five of them asked and received Baptism before their death. A number of them had never been baptized before. While others did not go so far as to receive the Sacraments from the Catholic priests, still they joyfully accepted his kind office in directing their dying thoughts towards Almighty God and their last end. Many a Protestant boy’s eyes were closed in death by the Catholic priest after the soldier had made a fervent act of contrition aided by the shepherd of Christ. But, above all, a kinder feeling towards the Church and the Catholic priest sprang up in the hearts of all these soldier boys, whether Protestant or Mormon or Jewish, because of the almost Divine service of love rendered by the ambassadors of Christ in this time of sorrow and pain and suffering.

Unmindful of rest and food, the two things most needed in avoiding the dread influenza, the priests worked among the sick.

Greater, because more intelligent, was the impression made upon the doctors and nurses by the presence and work of the Catholic chaplains. A new impression had been made upon them by the insistent demand of the seriously ill soldiers for the priest. They had attended Catholic patients before. But this was something different; it was the individual Catholic sickroom magnified hundreds of times, and everybody was witness to a magnificent act of faith voiced by thousands of Catholics who loved their Faith. These men and women could not ignore nor forget what they saw and heard. They thought about the phenomenon and talked on it. Finally, the thought found its expression of wonderment: “What a wonderful faith to possess.”

Unmindful of rest and food, the two things most needed in avoiding the dread influenza, the priests worked among the sick. They seemed unmindful of danger too. The doctors thought them foolish and some of them told this to the priests in a kindly way. But they admired them too at the same time. They could not understand how the chaplains could be so forgetful of their health. They seemed to forget that the number of priests was only two, while the doctors’ grand total was 150. They did not realize that, while they worked hard from a sense of duty, the priests labored out of pure love of Christ and the salvation of souls. It was the difference between labor from a sense of duty and labor from a spirit of love, and there is a very great difference.

I am a scientist working to stop coronavirus. We should cancel all Masses.
Patrick O'Neill

The secret history of Catholic caregivers and the AIDS epidemic
Michael J. O’Loughlin

The doctors admired the priests not only because they saw them assist the dying to die well, but also because they came to realize the material help that was given them in bringing back their patients to health. The bright, happy smile of these ministers of Christ in the midst of so much pain and suffering, the pleasant morning salutation, and the cheery word that raised the patients from the depression into which their extreme weakness had thrown them, came to be recognized as a tonic far exceeding any material medicine.

The doctors were glad to see these dispensers of the mysteries of God come into their wards. They were always so happy, so consistently cheerful that they spread sunshine and gave an impetus towards recovery wherever they went. The doctors admired, wondered, they could not understand. But what priest would not be happy and cheerful, even though tired and famished, when he was saving souls for Christ in such abundance!

Bernard J. McNamara was a frequent contributor to America in the 1910s and 1920s.