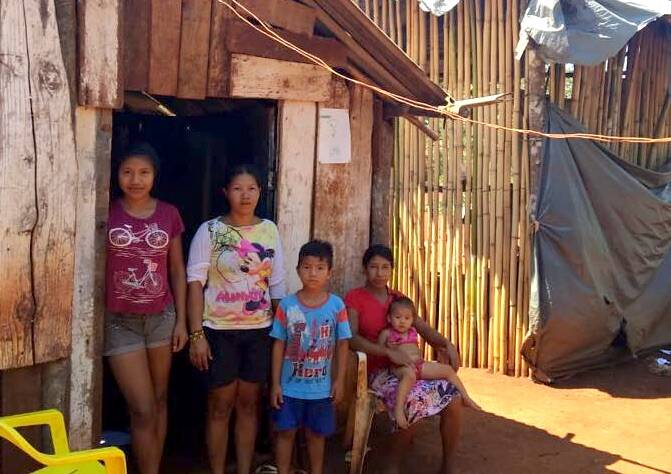 A home visit in Paraná. Photo courtesy of the Rev. Diego Pelizzari.

The indigenous communities of Brazil face serious threats from the coronavirus pandemic because of their unique immunological vulnerability, the lack of adequate health services, the poor sanitary conditions in many territorial preserves and the constant threat of land invasion from outsiders, warns the Indigenous Missionary Council of the National Conference of Bishops of Brazil.

The total indigenous population in Brazil amounts to about 900,000 people. About 60 percent of them live in rural or forest areas and a small number live in total isolation in the Amazon region. “The Brazilian health care system is generally precarious,” Antônio Eduardo Oliveira, the executive secretary of the council (known by its Portuguese abbreviation C.I.M.I.), told America. “For the indigenous population it’s much worse, given that most of them live in regions without basic infrastructure.

“As long as they remain in their territories, they can be somewhat safe. But their reservations must be closed to non-indigenous persons,” Mr. Oliveira said.

“As long as they remain in their territories, they can be somewhat safe. But their reservations must be closed to non-indigenous persons.”

C.I.M.I.’s missionaries suspended all visits to indigenous groups and recommended the closure of indigenous territories to people from the outside. But it seems almost impossible to guarantee such isolation. Many indigenous territories are regularly invaded by illegal loggers and miners and ranchers and farmers who illegally seize their land, especially in the Amazon.

“We always see trucks loaded with logs leaving indigenous lands,” said Sister Ana Alves, who works with indigenous peoples in the region of Humaitá, in the State of Amazonas.

Sister Alves regularly visits 15 villages that include members of the Parintintins, Diahui and Tenharim indigenous communities. She has, temporarily at least, suspended that outreach, following new guidelines from both church and state.

“But we sometimes see indigenous people in the city,” Sister Alves said. “They come mostly to see a doctor, given that their villages currently are visited only by a nurse when needed.” More complex medical needs require a 150-mile journey to the city of Porto Velho. “There’s a general lack of resources. Everything [within indigenous regions] is very deficient,” she said.

“People with interests in indigenous lands can take advantage of a chaotic situation.” And land invaders of course threaten to bring the virus with them.

Claims to many indigenous lands are currently being disputed by the government or by farmers. Those challenges often involve threats and acts of violence against indigenous people. C.I.M.I. members are worried of the potential escalation of such hostilities during the pandemic crisis. “People with interests in indigenous lands can take advantage of a chaotic situation,” Mr. Oliveira said. And land invaders of course threaten to bring the virus with them and infect indigenous communities.

“There’s a continuous persecution of indigenous people in our region,” said the Rev. Diego Pelizzari, who works with the Avá-Guarani, Kaingang and Xetá communities in the Southern State of Paraná. “We’re worried about their survival for many reasons.” The coronavirus is only the latest danger.

Father Pelizzari pointed out that indigenous peoples can be the subject of discrimination and racism in Paraná. On March 8, a group of four young Avá-Guarani men was attacked in the city of Diamante do Oeste; one of them died. The alleged reason for the assault was that one of the Avá-Guarani men was urinating in front of a house, according to police. C.I.M.I. has denounced the killing and other aggressions in the region that have taken place over the past few weeks.

“Their living conditions are terrible,” said Father Pelizzari. “In all 14 villages I usually visit, there’s no water system or sewage. Many of them also don’t have [electric] power.” The food support that nearby municipalities and the federal government previously offered the indigenous communities has been cut, he added, and there are no ambulances capable of transporting patients from indigenous villages to the cities where they might be able to receive better care.

Indigenous people have been following the news through the radio with great concern. “They see non-indigenous people running to the supermarkets to stock up on food supplies, but they’re unable to do the same.”

“There were suspected cases of Covid-19 in the region, and [indigenous people] have been following the news through the radio with great concern. They see non-indigenous people running to the supermarkets to stock up on food supplies, but they’re unable to do the same,” he said.

Father Pelizzari fears that Brazilian authorities may deploy the military to cut off indigenous villages, using the excuse of protecting them during the pandemic to disrupt their capacity to protest their conditions. “They’ll starve to death inside their lands if something like this happens,” he warned.

Other threats to the safety of indigenous peoples include the possible intrusions of fundamentalist evangelicals, according to Mr. Oliveira. Since the coronavirus outbreak began, many evangelical leaders in Brazil minimized the risks of infection and opposed Brazilian health authorities’ recommendations to suspend church services.

Last week, the government’s agency for indigenous people published guidelines that forbid any contact by non-indigenous people with all indigenous groups throughout the country, especially isolated peoples. But an opening in the advisory allows contact with isolated indigenous groups if “such activity is essential to [their] survival.” C.I.M.I. is concerned with how that exception might be interpreted by the agency’s department of Isolated Indigenous Peoples, “currently directed by a fundamentalist evangelical,” Mr. Oliveira said.

Our Lady of the Coronavirus
Angelo Jesus Canta

Protection against unnecessary and potentially dangerous visits may be enforced by local indigenous leaders, said Bishop Adriano Ciocca Vasino of São Felix do Araguaia, in the Amazon. “The organization of the indigenous groups can work to prevent the entrance of people from the outside,” he said.

Many indigenous groups in Brazil are Catholic but because there are few indigenous priests, they depend on missionaries to receive the sacraments. With the additional isolation prompted by the pandemic, the only contact some indigenous villages have with missionaries may be through smartphones.

But “in our region, the Xavante people are very organized in that sense,” said Bishop Vasino. The community is fortunate to have its own indigenous catechists and an indigenous priest, who will be able to continue to visit during a quarantine, he said.

The bishop is deeply concerned with the state of the local health care infrastructure, which he described as insufficient. And he feared that few indigenous people would go to cities to see a doctor if they become ill. “They complain they’re discriminated against when they go,” he explained.

“I don’t know what will happen if the coronavirus spreads here.”