Our Lady of the Coronavirus 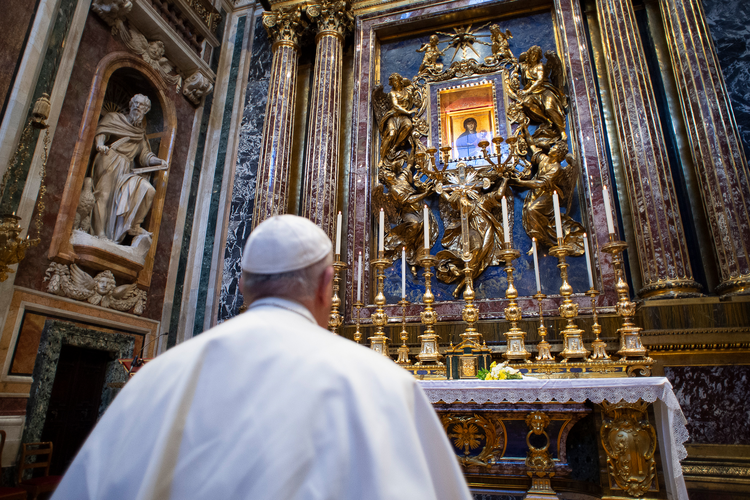 Last Wednesday, as the World Health Organization declared the coronavirus outbreak a “global pandemic” and as Italy was preparing for a full lockdown, Pope Francis offered a prayer to the Virgin Mary, entrusting the whole world to the protection of Mary. I remember thinking, “that sounds so Catholic,” before scrolling past the headline to consume more anxiety-inducing articles about the pandemic. Yet, when I returned to that prayer today, I found it immensely consoling. Not only was the pope asking Mary to pray for the world, but he was inviting the world to consider Mary as he and the people of Rome do.

Francis makes two easy-to-miss references to Rome’s special relationship with the Virgin Mary. In the English translation, Pope Francis refers to Mary with the titles “Salvation of the Roman People” and “Mother of Divine Love.”

The first title is a reference to the Salus Populi Romani icon of Mary holding the child Jesus. Some pious traditions allege that this large three-feet-by-five-feet icon predates the Gospels. It was purportedly painted by St. Luke the Evangelist—on wood from a table that Jesus himself built—while listening to Mary explain the details of her life. Though historians now believe that the icon does not date back to the first century, it has not lost its connection to biblical times. It is displayed in the Paolina Chapel of the Basilica of St. Mary Major, near the crypt that is said to contain actual wood from Christ’s manger in Bethlehem.

Not only was the pope asking Mary to pray for the world, but he was inviting the world to consider Mary as he and the people of Rome do.

The icon earned the title salus—salvation, health or welfare—from its earliest connections to the city. Historians say in the year 590, as the plague was beginning to overtake the city of Rome, Pope Gregory the Great ordered that image be taken in a procession around the city to stop the plague. The prayers were answered and the plague ceased. Since then, other popes have taken this image in procession against other mass illnesses like cholera.

Today, Pope Francis has renewed the icon’s popularity. Just after he was elected pope, Francis made a special visit to the basilica to entrust his papacy to Mary. Pilgrims and visitors can also count on seeing the pope away from the crowds at St. Peter’s Square when he visits the Salus Populi Romani icon before and after every trip abroad. He also made a special visit to the icon this past weekend, praying again for an end to the pandemic.

The second title may be more obscure for Catholics outside of Rome. Mother of Divine Love, or Madonna del Divino Amore, is associated with a countryside church about 12 miles from Rome’s historic center. Divino Amore traces its first miracle to the 18th century, much later than the Salus Populi Romani icon. A pilgrim on the way to St. Peter’s was attacked by wild dogs and he cried out to an ancient painting of Mary and Jesus on a nearby tower. The dogs yielded, and the pilgrim credited his safety to Our Lady. As the story spread, devotion to the Mother of Divine Love grew and eventually a sanctuary was built in her honor.

Pope Francis is calling us all to consider Mary not as an abstract helper but as a mother who has a proven track record of healing, protecting and watching over her people.

The image became important for the whole city of Rome at the height of World War II. Afraid that the war would reach the city, the Roman people begged the priests and the pope to take the image from its sanctuary to the Church of St. Ignatius in the middle of Rome. When the Allies liberated the city on June 4, 1944, Pope Pius XII declared the Mother of Divine Love as Rome’s savior.

Pope Francis prays the rosary, imploring God to rid Italy and the world of the coronavirus pandemic
Gerard O’Connell

Today, Catholics in Rome continue to call on the Madonna del Divino Amore when in trouble. Virtually every surface of the old sanctuary, the surrounding garden and even the gift shop is covered in grazie, small votive offerings from devoted pilgrims. These grazie feature photos, trinkets and little stories explaining how Our Lady of Divine Love saved loved ones from cancer, injury and other life-threatening illnesses. And every Saturday from Easter to October, a few hundred pilgrims (mostly Italian grandmothers) walk through the 12 miles from Rome to the sanctuary through the night. These nocturnal pilgrimages, which begin at midnight and end with a 5 a.m. Mass in the sanctuary, often do not appear in guidebooks or “Things to Do in Rome” listicles.

It would be easy to read Pope Francis’ prayer and miss these references to Rome’s particular relationship with the Mother of God. On one hand, the pope is fulfilling his role as bishop of Rome by alluding to the two most important Marian centers in the city. On the other hand, I think Francis is also inviting the whole world into Rome’s intimacy with the Virgin Mary. At a time of social distancing, increased anxiety and worldwide fear, Francis is not just making an appeal to Catholic devotion. He is calling us all to consider Mary not as an abstract helper but as a mother who has a proven track record of healing, protecting and watching over her people.

Angelo Jesus Canta is a graduate student of theology at the Boston College School of Theology and Ministry and former O’Hare Fellow at America. He studied Marian devotion in Italy and China as a Ricci Scholar at Loyola University Chicago.

@ajxcanta
Show Comments ()
Join the conversation: Login or create an account
Before you can comment, you need to update your profile to include your first and last name, as required in our comments policy. Then reload this page and you'll be set up for commenting. Update your profile
Show Comments ()
Comments are automatically closed two weeks after an article's initial publication. See our comments policy for more.