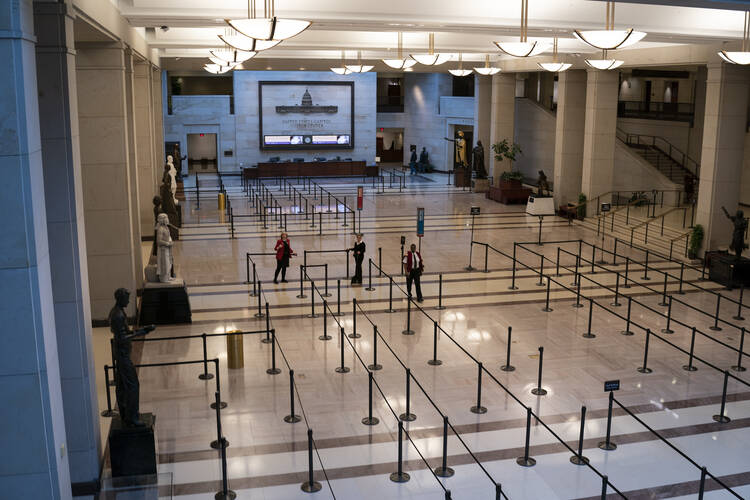 Queues prepared for tourists at the Capitol Visitor Center before organized visits were shut down in Washington, on March 12, 2020. (AP Photo/J. Scott Applewhite)

Catholic leaders dispatched letters to Congress on March 12, urging swift action on an emergency national response to the escalating coronavirus crisis as St. Patrick’s Day parades and celebrations were scrubbed and public gatherings, schools and sporting events closed down across the United States.

Speaking on behalf of the U.S. Conference of Catholic Bishops, Archbishop Paul S. Coakley of Oklahoma City, chair of the bishops’ Committee on Domestic Justice and Human Development, began by first offering prayers “for those who are ill and for those who have died… those affected by disruptions.”

Finally, we pray for health care workers,” he added, “and express our gratitude for their service in combating this disease.”

In crafting the federal response, Archbishop Coakley asked legislators that special consideration be offered “those most vulnerable: the poor, the elderly, the homeless, those in prison or detention facilities, immigrants and refugees, and those with severe underlying health conditions.”

Archbishop Coakley asked that special consideration be offered “those most vulnerable: the poor, the elderly, the homeless, those in prison, immigrants and refugees, and those with severe underlying health conditions.”

He added, “In order to safeguard the health of all, everyone who is sick with the virus should have access to health care that is not a financial burden, whether or not they have insurance.” He urged that work requirements for nutrition programs be suspended “given likely workplace disruptions” and asked that federal officials refrain from “immigration enforcement efforts at sensitive locations like hospitals and clinics.”

He noted that several of the policies under review in Congress have previously been supported by the bishops—“food security measures, paid sick leave, adequate care for immigrants regardless of status, and greater assistance for low-income workers, the unemployed, and those experiencing homelessness or housing instability.”

“From our early history and throughout our nation’s public health crises, Catholic health care has answered the call to serve populations affected by disasters, influenza pandemics and the opioid epidemic. We are now working at the forefront of the coronavirus outbreak,” said Mary Haddad, R.S.M., president and C.E.O. of the Catholic Health Association, in a letter to Congress on March 12. She said C.H.A. member institutions were ready to work with local, state and federal government to confront the crisis. Sister Haddad called for bipartisan support for a coronavirus response bill.

She urged emergency funding for testing and treatment and support for emergency expansion of Medicaid and the Children’s Health Insurance Programs. She asked Congress also to support related social assistance programs, like expanded unemployment, and housing and nutrition assistance, “particularly for the elderly and families with children,” to respond to the economic disruption engendered by the epidemic.

By adopting this comprehensive response, she said, “Congress will be protecting those most in need and those who will bear the brunt of this pandemic and economic downturn.”

She added, “Any legislation must contain immediate remedies that promote public health and protect the health and economic well-being of individuals, their families and communities.”

Sister Haddad said testing for the coronavirus should be available to everyone, including the nation’s 28 million uninsured, “without cost to the patients and with reimbursements to providers to ensure universal access.”

She also urged “paid sick leave for all workers who contract the virus or who need to care for a family member” among a number of response recommendations. “Any legislative package needs to ensure vulnerable individuals and families are protected and supported through enhancement of our safety net programs,” she said.

State houses across the country were closing doors as legislative sessions were canceled, but in Washington, Speaker of the House Nancy Pelosi was meeting with Treasury Secretary Steven Mnuchin, standing in for President Trump, to hammer out a national emergency response package. That vote in the House may come this week. Congress is scheduled to break on March 16. The speaker has the votes to push a bill through the House, but the legislation currently faces a more difficult path through the G.O.P.-controlled Senate, and President Trump complained on March 12 that the bill under discussion contains “things in there that have nothing to do with what we’re talking about.”

The proposed response would build on last week's $8.3 billion emergency coronavirus measure and provide free testing, a new federal sick pay program, more unemployment insurance and food aid for workers and other Americans hit by the crisis. Major insurers have agreed to provide diagnostic tests at no cost to their customers, but millions of people in the United States, just shy of the 10th anniversary of the Affordable Care Act on March 23, still have no insurance.

@clarkeatamericaclarke@americamagazine.org
Provide feedback on this article
Join the conversation: Login or create an account
Before you can comment, you need to update your profile to include your first and last name, as required in our comments policy. Then reload this page and you'll be set up for commenting. Update your profile
Show Comments ()
Comments are automatically closed two weeks after an article's initial publication. See our comments policy for more.