What do DACA recipients think of the latest version of the Dream Act? 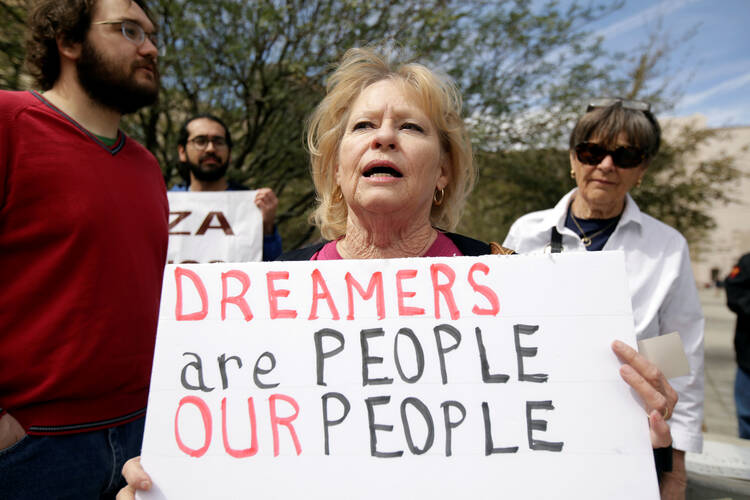 Reyna Montoya has been advocating for Dreamers for the last 10 years. She first got involved as a 19-year-old college student at Arizona State University.

“We weren’t called Dreamers then,” she said in an interview with America. “We were called dehumanizing names, like ‘illegal alien.’”

Ms. Montoya is a recipient of the Deferred Action for Childhood Arrivals program, an Obama-administration policy for undocumented immigrants who came to the United States as minors. While the Trump administration announced plans to end DACA last year, court rulings have temporarily blocked the termination of the program.

Ms. Montoya is one of hundreds of thousands of young immigrants who have faced an uncertain future for more than a year. The Dream and Promise Act of 2019, which was proposed last week, would create a pathway to citizenship for Dreamers and recipients of Temporary Protected Status.

“The people who are living day to day in fear, they just want someone to do something about this,” Ms. Montoya said. “They’ve had enough of the broken promises.”

The Department of Homeland Security grants T.P.S. to individuals whose home countries are suffering from ongoing conflict, environmental disasters or other unsafe conditions and protects them from deportation. Until recently, the Trump administration has sought to terminate T.P.S. for more than 340,000 recipients from El Salvador, Haiti and Honduras, among a number of other countries.

“We need a permanent legislative solution for those who have spent their lives contributing and living in the United States, the country they know as home,” Bishop Joe S. Vásquez of Austin, Tex., and chairman of the U.S. Bishops Committee on Migration, said while endorsing the latest iteration of the Dream Act. The first version of the Dream Act was introduced in 2001.

“Dreamers and T.P.S. holders are vital members of our community who are going to school, working to make our communities better and raising families,” Bishop Vásquez said in a statement. “They have lived in limbo for far too long and now is the time for a solution.”

“We’re asking for an opportunity to work hard. We’re not trying to take away from anyone—we’re trying to contribute to the community.”

This ongoing uncertainty is traumatizing to members of the undocumented community, according to Juan Manuel Pedroza Reyes, the director of peer support services at Valle del Sol in Phoenix, Ariz. He is a Dreamer himself and came to the United States when he was seven months old.

“Just like anything else, there are a lot of people who are not directly impacted, so they put it on the backburner,” Mr. Pedroza Reyes said, adding that receiving DACA changed his life. “We’ve seen quick fixes, but it’s time to make a permanent solution.”

DACA protects him from deportation and grants him permission to work in the United States. But Mr. Pedroza Reyes said he does not know how long that will last. All of his family is in the United States, including his father, siblings, cousins and grandfather. Yet he faces the possibility of being sent to Mexico, a country he was last in when he was still learning to walk.

“I don’t know what it’s like over there. The Latino/Hispanic community is much different,” he said. “We communicate in a different way, so I would have to relearn everything there.”

Mr. Pedroza Reyes earned a bachelor’s degree in social work from the College of St. Scholastica in Minnesota, but said he cannot pursue his master’s degree until DACA is resolved. In the United States, “we are always advertising that its the land of the free and of opportunities,” but that is not always the case, he said.

“Dreamers and T.P.S. holders are vital members of our community who are going to school, working to make our communities better and raising families,” Bishop Vásquez said. “They have lived in limbo for far too long and now is the time for a solution.”

“We are all humans and we deserve a chance to thrive. We’re not asking for things to be given to us,” Mr. Pedroza Reyes said. “We’re asking for an opportunity to work hard. We’re not trying to take away from anyone—we’re trying to contribute to the community.”

That is certainly the case for Ms. Montoya. In 2016, she founded Aliento, a nonprofit organization that provides arts and healing programs, leadership development and engagement training.

Some U.S. citizen children live in fear that their undocumented parents will be deported, she said. Families sometimes have to choose which DACA-eligible child will be given money to pay for the $500 application fee.

“It’s been heartbreaking to see the constant fear and hopelessness within our government,” Ms. Montoya said, noting that family separation also took place under the Obama administration but did not receive the media attention recent measures have. She has seen and been a part of a community living in fear for more than a decade.

Kevin Appleby, the senior director of the Center for Immigration Studies of New York, said supporting legislation like the American Dream and Promise Act “is not a difficult decision.”

“How often do you have the chance to help 2 million people get citizenship?” he said. Whatever happens with the bill, its proposal will be a part of the negotiations process, Mr. Appleby said.

President Trump and Republican leaders will likely want “something in exchange for the bill,” he said in an interview with America. That “something” could be funding for border security, an end to the Visa lottery or even cuts to family-based visas, three dimensions of Mr. Trump’s four-pillar immigration plan announced in 2018. Legalizing Dreamers was the fourth pillar.

Accompanying undocumented immigrants is “the Catholic thing to do”
J.D. Long-García

“It’s promising in a way, but how are they going to get this through the Senate?” Ms. Montoya said, adding that her work permit ends in a year. “My life is on the line here. There doesn’t seem to be any strategy to this. I wish they would have taken the opportunity to also bring up the 11 million undocumented immigrants that are living in the United States.”

More than 700,000 Dreamers are currently protected by DACA, but the Center for Migration Studies of New York estimates that there are more than 2.2 million Dreamers in the United States. Polls have indicated that more than 70 percent of Americans support legislation that allows Dreamers to stay in the country.

Last week, Auxiliary Bishop Mario Eduardo Dorsonville-Rodríguez of the Archdiocese of Washington, D.C., spoke to a U.S. Senate Judiciary Committee on behalf of T.P.S. recipients and Dreamers. A number of T.P.S. recipients have lived in the United States for more than 20 years, he said. Recipients, many of whom come from Central America, have more than 273,000 children who are U.S. citizens.

The American Dream and Promise Act would also protect holders of Deferred Enforced Departure. In 2007, President George W. Bush extended D.E.D. protection for 4,000 Liberians. Mr. Trump, however, removed their status a year ago, with an effective date at the end of this month.

I hope that Bishop Vasquez has convinced Congress that the lives and futures of the Dreamers should not be used any longer as bargaining chips for political gain. I could not imagine being in their position. They have already suffered enough.

Repatriation of the dreamers would result in them no longer having a precarious status. They already have citizenship in their own countries.

Smuggled-in foreign nationals (aka "Dreamers") should not benefit from the criminal actions of those who trafficked them into our country. The 1986 Amnesty was one of the biggest blunders in US legislative history. We must not repeat it.

I do not think that Jesus would hold children responsible for what their parents did. The Dreamers are Americans in all but one way. Our country should be proud to claim them.

DACA is very important. Why do they want to abolish it now? Giving these kids education and a way to live a better life. So, even if they need help with a coursework writing? That's okay. That's part of learning.

a way to live a better life?

All these DACA designsted individuals come from Catholic countries. Are you saying that association with Catholicism means an inferior life? What about the hundreds of millions still in Catholic countries? What do you want for them? I know this is a bogus comment but the sentiment is typical of what is offered here.