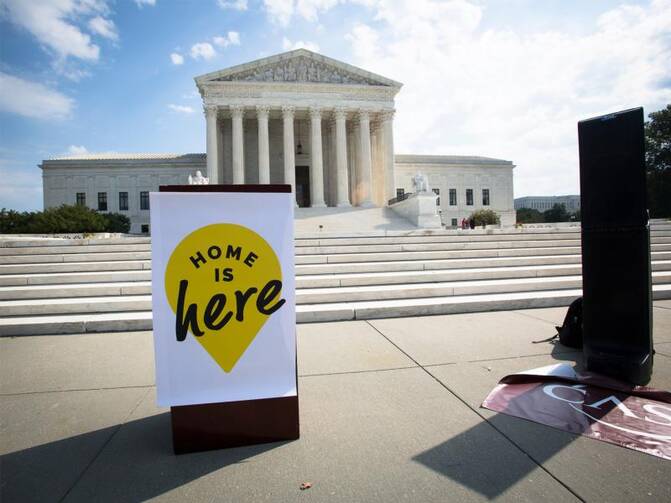 A podium is seen in front of the U.S. Supreme Court in Washington Oct. 2, 2019, prior to the start of a DACA demonstration. On Nov. 12, the court will hear arguments in a challenge to the Trump administration's termination of the Deferred Action for Childhood Arrivals. The case will affect the lives of more than 700,000 young people who were brought to the U.S. as minors without documentation. (CNS photo/Tyler Orsburn)

The Supreme Court will begin hearings on Nov. 12 to assess the Deferred Action for Childhood Arrivals program, an Obama-era policy to protect undocumented immigrants who came to the United States as children from deportation.

Some of these immigrants, known as Dreamers, are now in their 30s. They generally feel a much stronger connection to the United States than they do to the country of their birth. Some speak only English, for example, and those who came at a young age remember little if anything about the few years they spent in another country.

“They came here at a vulnerable part of their lives and they’ve become part of this country,” said Chris Kerr, executive director of the Ignatian Solidarity Network, an advocacy group. “They’ve integrated and are a part of our church and society.”

DACA recipients have been in a state of limbo since the administration announced its plans to end the program in 2017. Court rulings have temporarily blocked the termination of the program. While the Supreme Court will hear arguments this week, a decision is not expected until this summer.

But advocates say DACA, which also grants permission to work, was never a long-term solution. Even if the court upholds DACA, Dreamers would still be without a pathway to citizenship.

Earlier this year, the House passed the Dream and Promise Act of 2019, which would create a pathway to citizenship for Dreamers and recipients of Temporary Protected Status, a federal program which suspends removal procedures against specific foreign nationals because of humanitarian or other crises in their home countries. The Senate has yet to take up the latest version of the Dream Act, despite the fact that the measure has received bipartisan support.

“Regardless of what happens in the Supreme Court decision, the long-term need in this country is comprehensive, compassionate reform,” Mr. Kerr said.

Some of these immigrants, known as Dreamers, are now in their 30s. They generally feel a much stronger connection to the United States than they do to the country of their birth.

The “failures” of the nation’s leaders in Washington to make comprehensive reforms to immigration policy” cut across party lines, said Archbishop Jose H. Gomez of Los Angeles. These failures date back to 1986, he said, which was the last time Congress passed immigration reform. Archbishop Gomez said there are “no doubt” constitutional and legal questions “raised by DACA and how it was enacted.”

“But we need to be clear: The fate of these young adults should never have been in the courts in the first place,” the archbishop wrote in a column on Nov. 6 in Angelus News, the online news outlet of the Los Angeles Archdiocese. “And it would not be, if our leaders in Washington would simply set aside their political interests and come together to fix our nation's broken immigration system.

“Our nation made a promise to these ‘Dreamers,’” Archbishop Gomez wrote. “We have a moral obligation. It is time for the president and Congress to honor that promise and live up to this obligation.”

There are currently approximately 690,000 registered DACA recipients, according to U.S. Citizenship and Immigration Services. More than 90 percent of DACA recipients are from Latin America, with nearly 80 percent coming from Mexico.

Giovana Oaxaca, a DACA recipient, was just turning 3 years old when her family arrived in the United States. Her father was offered a job working in construction and at the time had struggled to find regular work in Mexico. She was 5 when the first version of the Dream Act was introduced in 2001 by Democratic Senator Richard Durbin and Republican Senator Orrin Hatch.

“Our nation made a promise to these ‘Dreamers,’” Archbishop Gomez wrote. “We have a moral obligation. It is time for the president and Congress to honor that promise and live up to this obligation.”

Growing up in Oregon, she said her family always knew someone who was going through immigration issues. When she was 14, one of her family members spent four months in detention in Texas during the holidays.

“There was no DACA. There was no relief, no opportunity for us to be back together as a family,” said Ms. Oaxaca, who works for Network, a Catholic social justice lobby. In the end, the attorney general made the decision not to prosecute cases in which immigrants were not considered dangerous.

Ms. Oaxaca said she does not consider Mexico her home and has not been there since she was an infant. “I can’t begin to imagine what it would be like to live there,” she said.

Her family came back to the church because of the support they received when a family member was in detention, Ms. Oaxaca said. “We had a family there,” she said, explaining how the community came together to pay bail and offer emotional support.

“I have a lot of hope,” Ms. Oaxaca said, propped up, she added, by efforts like the national Home Is Here campaign to bring attention to the dilemma faced by Dreamers and T.P.S. recipients. “I’ve seen how the national conversation is changing and support for Dreamers is so high. It feels like we’re at that point where legislation is possible.”

Ms. Oaxaca also noted that there are many organizations, like hers, that offer support to Dreamers. “You have people who will fight for you,” she said.

“Who’s more American than these people who have been raised here and have done so much to grow? This is not a situation in which there are winners and losers. There are just winners.”

Polls have indicated that more than 70 percent of Americans support legislation that allows Dreamers to stay in the country. While almost 700,000 people are protected by DACA, the Center for Migration Studies of New York estimates that there are more than 2.2 million Dreamers in the United States who are not registered in the program.

“This is the country that we know as home,” said Daniela Alulema, a DACA recipient and program director with the Center for Migration Studies in New York. She points out that DACA recipients have been significant contributors to U.S. society. “We’ve pursued higher education and there is a significant amount of entrepreneurship among DACA recipients.”

Ms. Alulema arrived in the United States from Ecuador in 2001. Her family left the country because of a political crisis. She noted that many DACA recipients are college educated and have served in the military. Many have started their own businesses, she said, adding that some DACA recipients are also priests and religious.

“We’ve gotten more sympathy,” Ms. Alulema said of Dreamers, “but it’s because of our parents that we’re here. We’ve been a bargaining chip for politicians since 2001.”

While she described DACA as a turning point in her life, she said Dreamers were never content with the temporary fix.

“We are looking for a pathway to citizenship,” she said. “We want to fully participate in this country—not just with our taxes, but with our voice.”

Ms. Alulema has both a U.S. citizen and an undocumented immigrant in her immediately family. She said a pathway to citizenship for Dreamers is just the beginning of the reform that is needed.

“It had always been considered a good thing when people became citizens,” said Donald Kerwin, executive director of the Center for Migration Studies in New York. “It was something that was regarded as good for the country and good for immigrants and their families.”

Mr. Kerwin disagreed with a popular notion that Dreamers are taking American jobs, calling it a political argument that is not based on facts. “Who’s more American than these people who have been raised here and have done so much to grow?” he said. “This is not a situation in which there are winners and losers,” he said of citizenship for Dreamers. “There are just winners.”

In the past, President Trump vowed to deal with DACA “with a lot of heart.” “To me, it’s one of the most difficult subjects I have because you have these incredible kids—in many cases, not in all cases,” Mr. Trump said in 2017, according to Politico.

Later that year, Texas Attorney General Ken Paxton threatened to take the Trump administration to court if it did not end DACA. His words were no doubt taken seriously as Mr. Paxton had already successfully blocked the implementation of Deferred Action for Parents of Americans and Lawful Permanent Residents. President Obama had signed the measure, known as DAPA, in 2014.

Ashley Feasley, director of migration policy and public affairs at the U.S.C.C.B., said it was unlikely Congress would act on legislation for Dreamers before the Supreme Court ruling. She said helping Dreamers is about “advancing the common good. They’re here and they’re contributing to our parishes and our society.”

José Arnulfo Cabrera, director of education for the Ignatian Solidarity Network and a DACA recipient, said he has lived life in two-year increments because of biannual renewal required by his immigrations status. The renewal pricess costs $495.

“The conversation shouldn’t be about keeping DACA,” he said. “It should be about passing the Dream Act. We’re going to pressure Congress to find a permanent solution.”

The Ignatian Solidarity Network is organizing a rosary walk on Nov. 12 in Washington, D.C., cosponsored by the United States Conference of Catholic Bishops’ Justice for Immigrants, the Association of Jesuit Colleges and Universities and other national Catholic advocacy groups.

“We've progressed so much as a country because we recognized the potential of people. We have so much untapped potential in DACA recipients,” Mr. Cabrera said.

The Ignatian Solidarity Network is also committed to supporting T.P.S. holders, Mr. Cabrera said. Until recently, the Trump administration has sought to terminate T.P.S. for more than 340,000 recipients from El Salvador, Haiti and Honduras, among a number of other countries.

@jdlonggarcia
Provide feedback on this article
Join the conversation: Login or create an account
Before you can comment, you need to update your profile to include your first and last name, as required in our comments policy. Then reload this page and you'll be set up for commenting. Update your profile
Show Comments ()
Comments are automatically closed two weeks after an article's initial publication. See our comments policy for more.