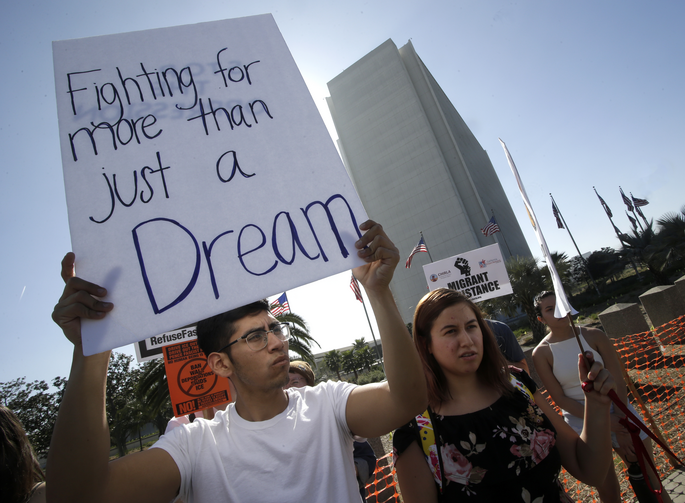 A protester holds a sign that reads "Fighting for more than just a Dream," as he joined Dreamers and hundreds of demonstrators calling for Deferred Action for Childhood Arrivals, or DACA, in early February outside the Federal Building in Los Angeles. A federal judge in Washington has ordered the Trump administration to restore DACA, saying reasons for ending it are not justified. (CNS photo/Mike Nelson, EPA)

The U.S. House of Representatives voted on legislation to create a pathway to citizenship for Dreamers and recipients of Temporary Protected Status this week. José Cabrera is among the 2 million Dreamers who awaited the vote.

“T.P.S. recipients have been here as long as we have,” he said. “The U.S. is finally recognizing a group of individuals that have always been second-class citizens.”

While Mr. Cabrera had expected the measure to pass the Democratic-led House, which it did by a 237-187 vote, he was less sure it would pass the Republican-led Senate. But he is hopeful that Republicans will want to show compassion leading up to the 2020 election. Polls have indicated that more than 70 percent of Americans support legislation to protect Dreamers.

Ashley Feasley, the director of migration policy and public affairs at the U.S. Conference of Catholic Bishops, said church leaders have been engaging in grassroots efforts and encouraging Catholics to talk to their representatives.

“The church is very interested in immigration. It’s part of our story. It’s part of the Bible and part of Catholic social teaching,” she said. “This is a family issue. This is about keeping families together and allowing them to participate in American life.”

DACA recipients do not want the uncertainty to rule their lives.

Last month, the House Judiciary Committee passed measures to help Dreamers, undocumented immigrants who arrived to the United States as minors, as well as T.P.S. holders. The measures have been combined in H.R. 6, the American Dream and Promise Act of 2019.

Ms. Feasley said passing H.R. 6 is important because it creates the language to protect Dreamers and T.P.S. recipients. It also puts pressure on the Senate to take action.

The Department of Homeland Security grants T.P.S. to individuals whose home countries are suffering from ongoing conflict, environmental disasters or other unsafe conditions and protects them from deportation. Until recently, the Trump administration had sought to terminate T.P.S. for more than 340,000 recipients from El Salvador, Haiti and Honduras, among a number of other countries.

The Deferred Action for Childhood Arrivals program, an Obama-administration policy for undocumented immigrants who came to the United States as minors, had protected a number of Dreamers from deportation for a number of years. While the Trump administration announced plans to end DACA last year, court rulings have temporarily blocked the termination of the program.

If it takes up the constitutionality of repealing DACA, the Supreme Court may issue a decision in June 2020, Ms. Feasley said. On June 3, the court decided not to fast-track a decision on DACA, despite requests from the Trump administration. Mr. Cabrera, a DACA recipient, suspects a Supreme Court decision would eventually end DACA if legislation protecting it is not passed beforehand.

“A lot of us try not to think about it,” he said of Dreamers who face an uncertain future. “It messes with your head a little bit.”

When he was 4, Mr. Cabrera came to the United States with his parents from a small village in the state of Veracruz, Mexico. The family was poor, he said, and could not afford the hundreds of dollars it would have cost to apply for a visa. At first, they moved to North Carolina but eventually wound up in Cincinnati, Ohio, where his father found work in the construction of Paul Brown Stadium.

Senator Orrin Hatch first proposed the Dream Act in 2001. In 2010, it was reintroduced in the House. Mr. Cabrera’s mother had been working as a community organizer and he spent time at rallies and marches supporting the Dream Act as a child. He followed the Dream Act as it passed the House only to fail in the Senate.

“I was very angry,” he said. “For two years, I had been talking to churches, visiting my representatives, going to Senate offices. I remember a lot of organizers would take me along and I would share my story.”

But while it felt like his efforts were in vain, Mr. Cabrera described it as a life lesson. “In my world, this is the kind of work you have to do to get a policy through,” he said. “I learned this was going to be a very long fight. There have been more losses than wins.”

DACA was a win, he said, but it only came about through advocates pressuring the Obama administration through sit-ins in Mr. Obama’s campaign offices leading into the 2012 election. “It was a last resort to give us something,” Mr. Cabrera said.

DACA gave Mr. Cabrera a way to continue his education past high school and into college. He is a graduate of Xavier University in Cincinnati. DACA also gave him the ability to travel to Mexico to meet his grandparents and his aunts and uncles. His mother is one of 12 siblings.

“It’s one of those things for undocumented kids, we don’t know our entire family,” Mr. Cabrera said. He added that there is also the threat of deportation the undocumented community has lived with for years. The Trump administration took the deportations by Immigration and Customs Enforcement under the Obama administration and “put it on steroids,” Mr. Cabrera said. “You learn to coexist with it. It’s nothing new to us.”

“Our work assisting and advocating on behalf of immigrants and refugees stems from the belief that every person is created in God’s image."

Christopher Kerr, the executive director of the Ignatian Solidarity Network, said legislation for Dreamers and T.P.S. recipients could face an uphill battle in the Senate. Senate Majority Leader Mitch McConnell has said he would not bring forward legislation that Mr. Trump would not sign. Mr. Trump and leaders of the Democratic Party do not share the same priorities, Mr. Kerr said.

In the meantime, DACA recipients “are hanging onto a court decision,” he said. “They’re also hanging on to the president’s word that he would be compassionate toward them. But he’s a little erratic. There’s not a great sense of security that he’s going to stick to that commitment.”

DACA recipients do not want the uncertainty to rule their lives, Mr. Kerr said. It impacts their ability to work and their schooling. “In the long term, they want to fully participate in the life of this country,” he said. “As a people of faith, Catholic social teaching calls us to be engaged.”

Isaac Cuevas, the associate director of immigration affairs for the Archdiocese of Los Angeles, said Dreamers “feel abandoned by our country and lawmakers. This is the only country they’ve ever known. The fact that there’s no resolution, it’s concerning to them.”

Dreamers often pursue higher education and are “contributors to who we are as a country,” Mr. Cuevas said. While he said the issue can no longer be ignored, he believes progress will not be made without compromise.

“There has to be concessions on both sides,” Mr. Cuevas said. “The latest version does not address border security. Yet that’s been a point of contention for a while. It’s not realistic that it will pass the Senate without those stipulations.”

Mr. Cabrera gets that, but said there must be limits to compromise. A path to citizenship for Dreamers and T.P.S. recipients should not result in more raids, for example, he said.

“When they say the wall, they don’t just mean the wall. They mean more ICE and a militarized border,” Mr. Cabrera said. “That means I would get a pathway to citizenship if my mom gets deported. Dreamers would not trade their parents for citizenship.”

The American Dream and Promise Act, which was proposed in the Senate in March, also protects holders of Deferred Enforced Departure. In 2007, President George W. Bush extended D.E.D. protection for 4,000 Liberians. Mr. Trump, however, removed their status a year ago, with an effective date at the end of March.

“This is a big step for Dreamers and T.P.S. holders who have called the United States home but have been working and living in uncertainty for years,”  Bishop Joe S. Vasquez of Austin, Tex., chairman of the bishop’s Committee on Migration, said in a statement. “Dreamers, T.P.S. and D.E.D. holders are working to make our communities and parishes strong and are vital contributors to our country. We welcome today’s vote and urge the Senate to take up this legislation which gives permanent protection to Dreamers, T.P.S. and D.E.D. holders."

Earlier this year, Auxiliary Bishop Mario Eduardo Dorsonville-Rodríguez of the Archdiocese of Washington, D.C., spoke to a U.S. Senate Judiciary Committee on behalf of T.P.S. recipients and Dreamers. A number of T.P.S. recipients have lived in the United States for more than 20 years, he said. Recipients, many of whom come from Central America, have more than 273,000 children who are U.S. citizens.

This story has been updated with a statement from Bishop Joe S. Vasquez of Austin, Tex., chairman of the U.S Conference of Catholic Bishops' Committee on Migration.

The Democrat Party did this in the House where they have a majority. The Democrat Party would pass late-term abortion if it was up to them. The Democrat Party is now openly hostile to Catholics, Christians, and even Jews and has been called anti-semitic. The party openly campaigns for racism in the form of anti-white policies, quotas. etc. Nothing the House passes when led by Democrat ideologues is holy or good. It's all just a form of hate and bigotry dressed up as alleged compassion.

Why doesn't the House address our crazy illegal immigration laws where released illegals only show up for their due process court hearings 10% of the time? Can any Catholic condone such blatant dishonesty and false witness? A: No. St. Ignatius would never condone deceit, lies, and falsehoods uttered by illegals, or their lawyers, with no intent to honor their word.