The Editors: Border security will not solve the immigration crisis 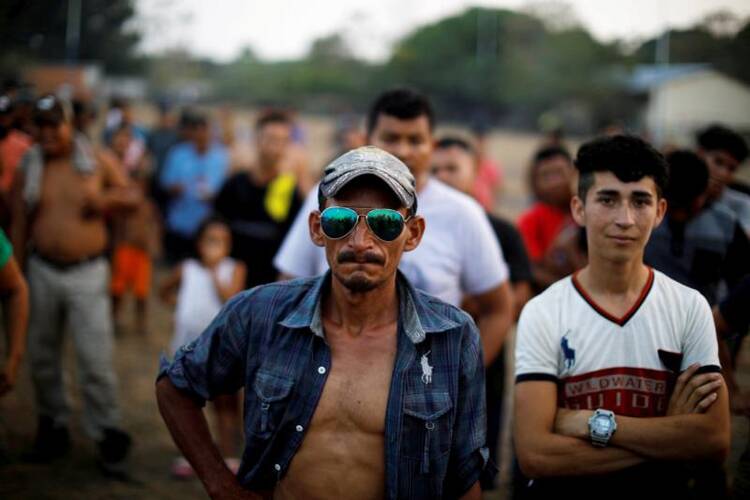 Migrants from Honduras and El Salvador attend a meeting at an improvised shelter in Mexico's Chiapas state April 10, 2019. They were waiting for a humanitarian visa to travel through Mexico on their way to the United States. (CNS photo/Jose Cabezas, Reuters)

The myth that border security alone will stem surges in unauthorized migration persists in the Trump administration. More than two years into a presidency notorious for its harsh enforcement measures and efforts to curb both legal and illegal immigration, conditions have only gotten worse.

“The unprecedented surge in unaccompanied children and family unit migration is overwhelming our ability to provide humanitarian aid within our immigration system,” Kevin McAleenan, acting secretary of the Department of Homeland Security, said on April 16. The practice of releasing asylum-seeking families with notices to appear in court, according to a new report from the Homeland Security Advisory Council, is supposedly the major “pull” factor that brings mothers, fathers and children to the United States. To “fix” this pull factor, D.H.S. recommends emergency legislation to allow longer detention of children when accompanied by parents.

These migrants, increasingly from agricultural backgrounds, are not legal experts who have devised a way to crack our nation’s complex immigration system. They are desperately fleeing gang violence or dire poverty.

The notion that asylum seekers are traveling thousands of miles to exploit this so-called loophole is absurd. These migrants, increasingly from agricultural backgrounds, are not legal experts who have devised a way to crack our nation’s complex immigration system. They are desperately fleeing gang violence or dire poverty. Twelve-year-old girls are dismembered for not accepting the advances of gang members. Fathers’ lives are threatened for reporting police officers who rape their daughters.

Those who are fleeing poverty, while they may not qualify for asylum status, do so out of sheer desperation. The greatest “pull factors” drawing people to the United States are its safety, security and opportunity—and compared to what they are fleeing, even much harsher enforcement is unlikely to overcome that pull. It is far more likely to channel immigration into even more dangerous and unregulated forms.

Instead of barriers, the nation needs more immigration judges to hear cases and address immigration backlogs. Simply speeding up hearings—a measure that was proposed by the administration—is a clear violation of due process. There also must be consistency in asylum decisions. As it is now, whether asylum seekers are granted legal status or not largely depends on which judge hears their case rather than on their personal circumstances.

Instead of barriers, the nation needs more immigration judges to hear cases and address immigration backlogs.

Measures that address only the migrants who arrive today do nothing for those who will arrive tomorrow. The only lasting solution is to make ongoing substantial investments in Central American countries. That means sustained efforts to improve education and infrastructure and to create lasting jobs in those countries. And it means standing shoulder to shoulder with allies to rid these countries of tyrannical gangs and networks of human smuggling once and for all.

Enforcement alone will never be a solution when human beings are involved. A permanent resolution will come only by addressing root causes. The United States must recognize its duty to reach beyond its borders.

Border security will not solve the immigration crisis

No, but it will be a good start. We have to recognize just what the problem is before there can be a solution. Why are Catholic countries such places of violence and poverty? Why is non-Catholic USA such a prosperous safe place? When the Jesuits admit that the culture that built the United States is the answer to global prosperity, they can be taken seriously.

The countries being discussed here are currently a little less than 50 percent Catholic according to State Dept. and CIA fact books. The “all Catholic” character of these countries began changing in the 19th century with the change rate accelerating in the 20th century. The dominance of Catholic influence during the first three hundred years of European colonization certainly marked the character of these societies, but present day influence of the Church is questionable.

You just indicted the Church and agreed with my position. Why the drop to less than 50%. Yet 300 years of Catholic dominance. The society that the Catholic culture set up is still there but has morphed some. The Church wants to influence these areas through their modern political policies. No reason to think it will lead anywhere positive.

Thank you for supporting my point.

Nobody is saying "border security alone" will solve the immigration crisis, but lots of people flip that into the immigration crisis has nothing to do with border security. When the Pope hands out half a million dollars to illegal immigrants trudging through another country, I don't call that an honest attempt to take account of all sides' interests (something that would never be contemplated with other states). I must admit it inclines me to be far less generous to the next Peter's Pence collection.

It amounts to less than a dollar per migrant. Probably around 50 cents per migrant this year. The US has invested billions in Central America in aid in the past decade. So the Pope's money is less than a gesture.

ok, so we'll just close our eyes and pretend it's not our problem. That sounds like a great idea. We will leave it to the pope, and others to solve, just not us.

Editors
Perhaps you could explain why the Central Americans refuse asylum in Mexico.

Securing the borders will certainly make us safer and more prosperous. Welcoming the immigrant does not mean allowing your country to be overrun at the expense of the people you are supposed to be serving. Speaking of serving, how does letting everyone in regardless of their situation and in violation of reasonable law help the Church to serve the people who pay for everything. Of course, this includes the bishops callous disregard of the People of God whose hard-earned donations they so gladly and generously pay in all these settlements because the bishops did not do their jobs. Oh, yeah, they couldn't supervise the priests and priestly formation because they were too busy destroying society by openly defying Paul VI and Humanae Vitae.

This article conflats the 'immigration crisis' with America's border issue!

They are not together. - the 'immigration crisis' is not our problem - the 'illegals'[ are...!

Mr. Doyle, I just realized this point. The crisis is not our problem and needs to be dealt with in the countries these people are either fleeing or being paid to leave and go north. There is too much hidden about the caravans and who is sponsoring and organizing them. Securing the borders is our duty; not an option.

This article conflats the 'immigration crisis' with America's border issue!

They are not together. - the 'immigration crisis' is not our problem - the 'illegals'[ are...!

See my post below. If you listen to Trump, FOX News or US media you're dramatically unaware of the crisis our foreign policy and US based businesses create in Honduras and in fact are a push factor for migrants fleeing Honduras. Call it blowback!

Oh, please, Mr. Webb. All the aid we provide to the Americas and it's President Trump and U.S.-based businesses that create the problems? Give me a break!

The US is simply experiencing blowback from it's misguided foreign policies and business practices.

So you are saying that if Chiquita pulled out of Honduras and the USA did not sell tear gas and guns to the Honduran government things would be hunky dory there. My guess is that is not true and there is something basically dysfunctional with the society there that has been there for centuries. The question is how to change that in a positive way?

Liberals always avoid the severe and urge more spending by the usa to rescue failed Catholic countries. An Ecumenical Council should be held to explore why a non death penalty region from Brazil to Mexico is the most murderous large region on earth and largely Catholic. The solution is for China who has no gang problem since they execute within 2 years those kinds of felons...to take over northern Latin America’s law enforcement....not for the usa to start another welfare fiasco that has given it’s ghettos a murder rate roughly similar to Brazil...the #1 country in people murdered per year though the #1 rate of murder belongs to another non death penalty Catholic country from whence many of the immigrants are coming. Brazil has about 55,000 murder victims a year and China has 11,000 with 7 times Brazil’s population. China could save tens of thousands of murder victims if it did law enforcement and justice for northern Latin America...they would save 50k alone in Brazil and ? 17k in Mexico...per year. Rome never speaks to crime victims that I can remember until the Globe forced it to.

Control of sovereign borders is the bedrock principle of the international system. The editors are correct that addressing border security merely deals with symptoms, not causes. The causes of the push northward from Central America is desperation caused by multiple interrelated factors: massive poverty, a prolonged drought, a destructive coffee virus, violence, corruption, and intimidation caused by the transit of cocaine from South America bound for the US, and guns coming illegally across the US border. 90% of the illegal guns in Mexico come from the US, 40% in Honduras. The violence and corruption weaken even more the fragile institutional capacity of these countries, especially the judicial systems and police. Cocaine has transformed Honduras into a hell, quite different from the peaceful country I visited with the US military two decades ago. President Trump’s decision to end US assistance to Central American countries will only make matters much worse, not better. Example: US assistance to El Salvador has been crucial in reducing violence. American assistance to these countries is designed to improve security and promote economic development so that people have a better future. It’s much better and in the long term more cost effective to solve the problem in Central America than at the border. At the same time we need to stop illegal guns from moving across the border and seriously reduce drug consumption at home. For more info on what US policy is doing in Central America see:https://flipboard.com/@newyorktimes/what-trump-gets-wrong-about-central-american-aid/f-dfb33c4d9c/nytimes.com

My guess is that the most that can be expected from the Church in Central America right now is the performance of the corporal and spiritual works of mercy. Thank God the Church still has selfless members engaging in that. To expect the Church to somehow “fix” Central America, and especially to fix it exactly to our satisfaction, seems like an exercise in futility.