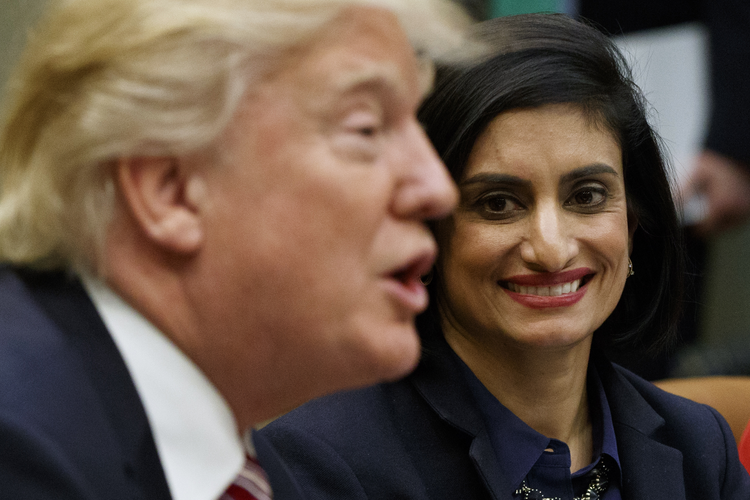 In this March 22, 2017 file photo, Administrator of the Centers for Medicare and Medicaid Services Seema Verma listen at right as President Donald Trump speaks during a meeting in the Roosevelt Room of the White House in Washington. The Trump administration has a Medicaid deal for states: more control over health care spending on certain low-income residents if they agree to a limit on how much the feds kick in. (AP Photo/Evan Vucci, File)

Groups representing Catholic hospitals, social service agencies and U.S. bishops have come out against a proposal from the Trump administration that they say will harm low-income Americans seeking medical care through Medicaid, calling it “a giant step backwards.”

“It is unacceptable for the federal government to walk away from its shared commitment under the Medicaid program to ensure care for all low-income and vulnerable individuals in our country,” reads a statement released on Jan. 31 by the Catholic Health Association, the domestic justice committee of the U.S. Conference of Catholic Bishops and Catholic Charities USA.

Last week, Seema Verma, the head of the Centers for Medicaid and Medicaid Services, said the idea behind the administration’s “Healthy Adult Opportunity” is to improve the quality of care for the poor while controlling costs. According to reports from The Associated Press, the complex block grant proposal would be a first step to changing a longstanding financial arrangement between Washington and the states. The federal share of Medicaid is now open-ended, meaning that a state is at least partly protected from unpleasant surprises like a new, $300,000 prescription drug or an economic downturn that swells enrollment.

Outlined in a letter from Ms. Verma to state Medicaid directors, the deal is optional for states. To get it, they would have to apply for a federal waiver.

“It is unacceptable for the federal government to walk away from its shared commitment under the Medicaid program to ensure care for all low-income and vulnerable individuals in our country.”

Its scope would be restricted to coverage for able-bodied adults under 65. A state could not put nursing home residents, disabled people or very low-income pregnant women and children into the new plan. The federal government would not limit its Medicaid contribution for these groups, considered the most sensitive.

“Our focus...is to change the whole paradigm and to reset the framework of how we’re working with states,” said Ms. Verma. “We are providing them this up-front flexibility and the federal government is in the role of monitoring the program.”

The three Catholic groups joined other organizations, such as the American Medical Association and a professional society representing cancer doctors, in condemning the proposal, calling it “wrong.”

“Catholic social teaching holds that each person is created in the image of God; that each human life is sacred and possesses inalienable worth; and that health care is essential to promoting and protecting the inherent dignity of every person,” the statement reads. “Ensuring access to health care is essential to human flourishing and we must especially protect low-income individuals and families.”

The statement called on the federal government to uphold its agreement with states under Medicaid and warned that the new proposal will shift costs to states, health care providers and charities. “This is not the basis for a sound effort to improve the health of those in need but is instead a giant step backwards from the goal of accessible and affordable health care for all,” the statement concluded.

Medicaid provides insurance for one in five Americans, according to the Kaiser Family Foundation, covering primarily the elderly and people with disabilities. The current structure “allows states the flexibility to use Medicaid to address health priorities such as addressing the opioid epidemic. The financing structure also provides support for states to allow Medicaid to operate as [a] safety net when economic shifts and other dynamics cause coverage needs to grow,” the Kaiser report reads.

Since 2014, 37 states have expanded access to Medicaid through the Affordable Care Act.

Show Comments ()
Comments are automatically closed two weeks after an article's initial publication. See our comments policy for more.
Show Comments ()
Join the conversation: Login or create an account
Before you can comment, you need to update your profile to include your first and last name, as required in our comments policy. Then reload this page and you'll be set up for commenting. Update your profile
Advertisement
More: Health Care / US Church / US Politics / Donald Trump