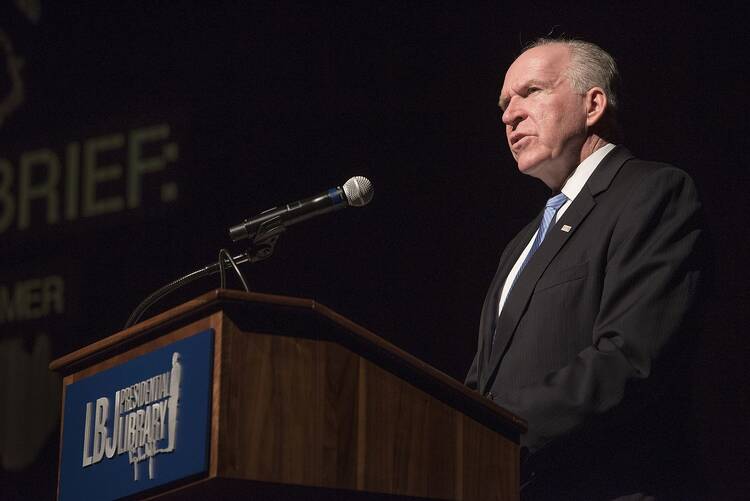 John O. Brennan, the Obama-era C.I.A. director who has criticized President Trump as “lawless,” “unethical” and “an anomaly,” addressed an audience at Fordham Law School’s Center on National Security on Jan. 30. Joined by the center’s director, Karen J. Greenberg, and NBC News national security correspondent Ken Dilanian, Mr. Brennan condemned the U.S. drone strike that killed Iranian Maj. Gen. Qassim Suleimani in Baghdad on Jan. 3 and questioned its motives. However, he defended the legality of the use of drones for military operations under limited circumstances.

At Fordham, Mr. Brennan offered a shifting commentary on the impeachment proceedings, China and Ukraine. He focused primarily on the justifications, or rather lack thereof, for the assassination of General Suleimani, whom Mr. Brennan called “a principal nemesis of mine during my time in government.”

He characterized the general as “a very, very engaged individual” in the Middle East and “the face of the resistance to Sunni extremism in the region.” But Mr. Brennan said he has seen no evidence to suggest that the general was planning a strike against the United States at the time of his death.

“I cannot see that what this administration did against Suleimani has any legal basis,” said Mr. Brennan, referencing the Authorization for the Use of Military Force, the joint resolution that gave President George W. Bush the authority to “use all necessary and appropriate force against those nations, organizations, or persons” connected to the terrorist attacks on Sept. 11, 2001.

According to Mr. Brennan, a drone strike can only be authorized and legally appropriate when launched against an “unlawful combatant,” not “a government official of a foreign country that we’re not at war with.”

He warned that while the Iranian strike targeting two U.S. military bases in Iraq was, for Iran, “a strike for domestic catharsis,” he still thinks that some in Iran may support further offensive action.

“I cannot see that what this administration did against Suleimani has any legal basis,” said Mr. Brennan at Fordham Law.

“We know that the Iranians have long memories. We know that they can be patient, so I believe that there are some in Iran who will want to avenge Suleimani’s death with blood, not with brain injuries,” he said. “When you take out someone as consequential as Suleimani, it really has…quite an impact.”

Still, Mr. Brennan maintains that the general’s death has had an immediate and positive, if brief, impact. “I believe [the strike] did mitigate things in the near-term,” he said.

What Are Drones Doing to Us?
Eli S. McCarthy

Mr. Brennan, a Fordham alumnus who said that his Jesuit education provided him “a tremendously strong sense of the distinction between right and wrong,” has become a controversial political figure. As chief counterterrorism adviser to President Obama, Mr. Brennan was a key figure in the development of U.S. drone capabilities. In 2012, he publicly acknowledged drone strikes against Qaeda militants and defended the efficacy and morality of the drone program.

“Targeted strikes conform to the principle of humanity, which requires us to use weapons which will not inflict unnecessary suffering.… I suggest to you that these targeted strikes against [Qaeda] terrorists are indeed ethical and just,” said Mr. Brennan in an April 30, 2012, speech at the Wilson Center in Washington, D.C.

During this time, the Obama administration developed the “disposition matrix”—a roster of targeted persons dubbed the “kill list”—as a method for identifying terrorist threats. By Oct. 2012, the estimated number of people killed within a decade by U.S. drone strike was approaching 3,000, according to The Washington Post.

Mr. Brennan has also been criticized for his defense of torture. In response to an over 500-page report on torture released in Dec. 2014 by the Senate Intelligence Committee, Mr. Brennan called the Senate’s investigation “flawed” and, while finding fault in his agency’s former “enhanced interrogation” program, defended the U.S. interrogators and steered clear of directly addressing torture.

The report found that “C.I.A. personnel, aided by two outside contractors, decided to initiate a program of indefinite secret detention and the use of brutal interrogation techniques in violation of U.S. law, treaty obligations, and our values.” In July 2014, Mr. Brennan issued a public apology after five C.I.A. employees conducted an illicit search of Senate investigators’ computers.

During Mr. Brennan's tenure in the Obama administration, it developed the “disposition matrix”—a roster of targeted persons dubbed the “kill list”—as a method for identifying terrorist threats.

Mr. Brennan has become a frequent and vociferous critic of President Trump. On Aug. 14, 2018, in response to Mr. Trump’s name-calling of former aide Omarosa Manigault Newman, Mr. Brennan tweeted, “It’s astounding how often you fail to live up to minimum standards of decency, civility, & probity.” The president quickly hit back by revoking Mr. Brennan’s security clearance.

America asked Mr. Brennan if it were realistic to impose legal restrictions on the use of drones for tactical operations once these weapons’ capabilities pass into the hands of another commander-in-chief, a president who may find different reasons to justify their use.

Mr. Brennan responded that military strikes via drone—“a tremendously capable weapon of war”—must be approved within a legal framework and that the distinction between “unlawful combatants” and legitimate government leaders is paramount to that decision.

Drones have not proved infallible in terms of avoiding civilian casualties, cited by Mr. Brennan as a major selling point for their deployment. Between Jan. 1 and Feb. 5, 2013, there were at least five drone strikes that killed 24 people in Yemen. “Many of the militants reported killed…were very young and do not appear to have had any important role with Al Qaeda,” the New York Times reported.

According to the Bureau of Investigative Journalism, the U.S. launched 29 to 36 drone strikes in 2012 against targets in Yemen. Estimates suggest these strikes killed between 173 to 215 people and up to 12 civilians. On Jan. 30, American officials announced that Al Qaeda leader Qassim al- Rimi is believed to have been killed in a strike earlier this month.

According to the Bureau of Investigative Journalism, the U.S. launched 29 to 36 drone strikes in 2012 against targets in Yemen.

The legality, ethics and effectiveness of the U.S. drone program has been a matter of debate. In Feb. 2013, the Atlantic Council reported that General Stanley McChrystal, former commander of U.S. Forces in Afghanistan, was concerned about drones “increasingly targeting low-level militants who do not pose a direct threat to the United States.”

Eleven senators—eight Democrats and three Republicans—demanded in Feb. 2013 that President Obama release classified memos on “targeted killings of U.S. citizens” in foreign operations. In a speech at the National Defense University in Washington in May 2013, President Obama defended his drone program, insisting that the nation’s strikes were legal. “We are at war with an organization [Al Qaeda] that right now would kill as many Americans as they could if we did not stop them first. So this is a just war—a war waged proportionally, in last resort, and in self-defense.”

But in an April 2013 article for America, Eli S. McCarthy, a professor at Georgetown University, argued that the ability to kill targets thousands of miles away using drones “lowers our engagement of the roots of conflict.”

“Focusing on the ‘just’ war theory as the key frame of moral analysis for armed drones also fails to adequately engage our imagination for practices of nonviolent peacemaking,” Mr. McCarthy wrote.

The U.S. Conference of Catholic Bishops, through its Office of International Justice and Peace, released a document on U.S. drone operations in January 2014. “Applying deadly force without clear evidence of an imminent attack is contrary to both the rules of just war and international humanitarian law,” the U.S. bishops said.

The bishops also took issue with how U.S. officials chose their intended targets, arguing that identifying “all males of a certain age in areas of Afghanistan and Pakistan as combatants is morally indefensible.”

Pope Francis, the U.S.C.C.B., Pax Christi USA and the Sisters of the Mercy of the Americas all denounced the killing of General Suleimani as an escalation and urged efforts toward peace.