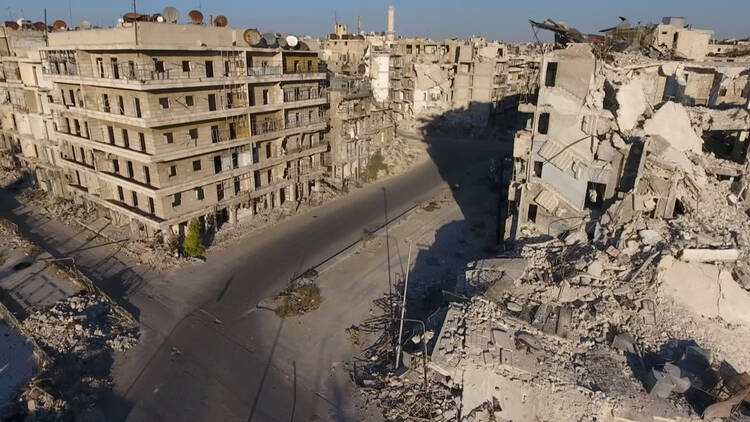 The aftermath of drone strikes in Aleppo, Syria in 2016. (CNS photo/Reuters)

During his run for the White House, Donald J. Trump assured voters that he had a “secret plan” to take out ISIS. Two months into his presidency, it appears that plan amounts to making good on Mr. Trump’s other campaign-trail promise to “bomb the sh*t” out of the terrorist organization. American air power has been ramped up in Syria and Iraq, and according to the senior United States commander in Iraq, the military has sped up and decentralized the process for approving airstrikes. But ISIS fighters are not the only ones getting caught in the crossfire. In March, it was reported that up to 200 civilians in the northern Iraq city of Mosul had been killed by a series of airstrikes—potentially “the highest civilian death tolls in an American air mission since the United States went to war in Iraq in 2003,” according to The New York Times.

When it comes to drones casualties, knowing ‘how many’ is not enough.
The Editors

Mr. Trump is not unique in his preference for waging war from above. Just over a year ago, the editors of America published one of several editorials that condemned President Obama’s prolific use of air power, despite his openness about the number of people these strikes killed. “Telling us ‘how many’ is hardly sufficient from a president who claims to head ‘the most transparent administration in history,’” wrote the editors. “True accountability demands that he also explain why and on what authority” (4/23/2016). Mr. Obama justified his use of drones by overstating the imminence of threats to U.S. security, thereby excusing himself from considering longer-term strategies for protecting the country.

Loosening White House oversight and accepting a higher risk to noncombatants, Mr. Trump similarly ignores a long-term threat—that a higher toll among civilians, in addition to being repugnant in its own right, will serve as a powerful recruitment tool for ISIS.

Mr. Obama conducted 10 times as many airstrikes as President Bush, and until recently it remained to be seen how President Trump would employ this method of “defense.” Unfortunately, it appears that Mr. Trump is more than willing to continue—and expand upon— his predecessor’s devastating legacy.

I suggest you read your own Article respecting the Syrian gas attack and the Pope's call for action by those who have the.... "political responsibility....to stop this tragedy and bring relief to a population wracked by war...." POPE Denounces massacre in Syria
I believe there is ample photographic evidence of the actions of ISIS in its systematic suppression of the population and serial execution of Christians consisting of drownings, burning, defenestration, a wholesale execution, etc ---all recorded and published on line. Of all the actions that might be taken to stop this "program of murder", the historic use of drones is certainly the most limited and antiseptic response that could be taken. And by any accounts it certainly meets "the call" that Francis has issued to take action both recently in Syria and earlier in his response to the public execution of Christians by Isis
So while the stated reason for our use of drones has been our own national security, I think we may now add the justification of a response to papal request.

Please spare us the thought that diplomacy is the answer, since that route has had no effect on limiting the at least 500,000 casualties in Syria alone. I think it is fair to say that the Pope,being fully aware of the sorry history of this monumental diplomatic failure, must have been asking for another course of action involving more than an exchange of words.
I suggest that your condemnation of drones is totally misplaced in the light of the plain facts, the utter failure of diplomacy, and most importantly the choice is really "drones or combat troops".
Yes there is collateral damage to civilians by drones but nothing compared to the utter havoc befalling a population in a full combat war. Should you require any proof, I ask that you simply note that right now in Mosul, Isis uses civilians as human shields.

The opinions of those who do not have the responsibility, accountability, and information of the people that they criticize are not useful. To pose those opinions as questions, however, to those who are accountable and responsible, and to "pin them down" for a coherent response would be very useful.. Gee, America is a public forum. Why not ask those questions much as America once did when Sen. J. McCarthy was in the news?