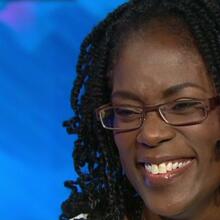 In All Things
Transformation at Gunpoint
Eli S. McCarthyJanuary 17, 2014
Antoinette Tuff met an armed intruder with love and models for us the realistic force of nonviolence. 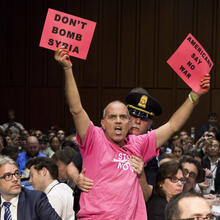 In All Things
Interrupting Hostilities and Seeking Justice in Syria
Eli S. McCarthySeptember 04, 2013
Now that the president has received support for proposed military strikes in Syria from key Congressional leaders the likelihood of an attack seems more likely Yet rather than deterring behavior or bringing an end to the violence that has already cost more than 100 000 lives U S military strikes 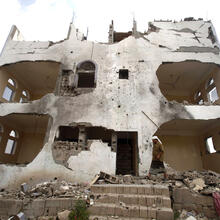 In All Things
What Are Drones Doing to Us?
Eli S. McCarthyApril 02, 2013
In February the Obama administration 39 s legal argument for the use of armed drones was revealed in the press The ACLU responded with legal critiques and the UN is currently conducting its own analysis Academics have been offering analysis as well such as Michael Walzer and Maryann Cusimano Lov

In All Things
A Just Peace Response to Syria
Eli S. McCarthyFebruary 24, 2012
Some new ideas on how to address the crisis in Syria from Eli S McCarthy professor of Justice and Peace Studies at Georgetown University Is increasing violence civil war and covert support for armed revolution the only options left in Syria Many analysts respond affirmatively However from a