What Are Drones Doing to Us?

What Are Drones Doing to Us? 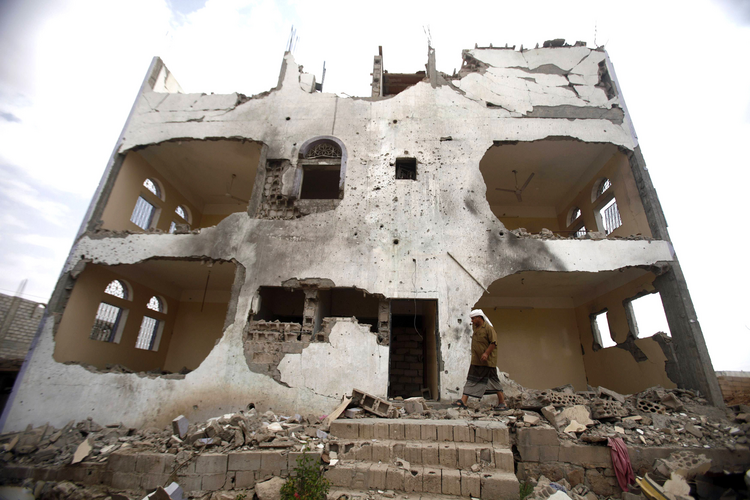 In February the Obama administration's legal argument for the use of armed drones was revealed in the press. The ACLU responded with legal critiques and the UN is currently conducting its own analysis. Academics have been offering analysis as well, such as Michael Walzer and Maryann Cusimano Love. For the most part these analyses consider laws of war, "just" war theory and civil rights. However, Cusimano Love's analysis notably mentions a key limit, namely that "just" war theory does not tell us how to build peace.

Focusing on the "just" war theory as the key frame of moral analysis for armed drones also fails to adequately engage our imagination for practices of nonviolent peacemaking. This focus also lowers our capacity to sustain peacemaking practices, and offers little insight into envisioning the justpeace which "just" war theory purports to intend. "Just" war theory also depends on, but doesn't develop, the "just people" needed to interpret, apply and revise the criteria.

But even more significant, "just" war theory doesn't prioritize or illuminate a more important moral question about human habits. I recommend we shift the primary analysis of armed drones from law, "just" war theory and rights to the question, "what kind of people are we becoming by using armed drones?" The following discussion provides an example of where this ethical approach might draw us.

With drones killing people, we become the kind of people who cultivate fear in communities as they wonder if they may be attacked just because they are in the wrong place at the wrong time. Drones provoke high anxiety in communities and children become especially afraid. Parents often fear sending their kids to school or going to the market. This anxiety and fear is incredibly destructive to trust in communities, and as many have pointed out, drone killing also leads people to turn to other fear-based strategies, including acts we often describe as "terrorism."

Armed drones are an impersonal means of engaging conflicts. By relying on the latest destructive machine to settle conflict and destroy the other, we become increasingly less capable and willing to engage various conflicts in ways that are in accord with our human dignity. For instance, we become less likely to create conditions to defuse the hostility, such as using development programs, restorative justice practices or nonviolent civilian resistance training. Furthermore, we also become less likely to speak face-to-face with our opponents, less empathetic for the other, less prone to healing and more apt to ignoring, excluding and de-faming. The capacity for empathy is a core virtue of human flourishing, one that President Obama has promoted in the past. But armed drones significantly damage our capacity for empathy in addition to lowering the empathy that others may have for us.

This impersonal way of engaging conflict is also manifested in the video-game mentality of the drone controllers. Such objectification contributes to the habits in our culture of relating to others primarily as instruments for economic gain, political power, sexual gratification, etc. One of the direct manifestations of this habit is the development of higher rates of post-traumatic stress syndrome in military drone operators compared to soldiers in combat zones.

Avoiding the roots of conflicts

Using armed drones also lowers our engagement of the roots of conflicts. Although drones may appear to be immediate or short-term resolutions, we soon end up facing the same conflict re-surfacing in new ways. Then we wonder why we seem to lurch from hostility to hostility. We must develop practices and habits that get closer to the roots of conflict to transform them into opportunities for growth and human flourishing. In our culture, this habit of avoiding root causes shows up too often in our criminal justice system, school disciplinary systems, immigration debates and even friends' unwillingness to offer constructive critique to each other. Using armed drones will exacerbate this habit and cultural problems that arise from it.

Using armed drones diminishes other key virtues besides empathy. For instance, the virtue of hope in others, particularly regarding the capacity to change, will falter. We see this showing up in the ways we too often disconnect, avoid or give up on people who think differently than us in our families, in the criminal justice system and in our political debates.

The virtue of solidarity with all people, especially the poor and marginalized, will become less active. We damage solidarity not only by increasing fear and cultivating fear-based strategies of violence in poor and marginalized communities, but also by instigating an arms race in drones, which diverts funds away from those in urgent need.

The virtue of courage, which risks one's life to lift up the dignity of all people, will also be diminished. This is incredibly damaging to our capacity to imagine, enact and sustain the practices of nonviolent civilian resistance, which has driven our greatest social movements and overthrown dictators across the globe in much more sustainable ways than any violent approach.

The virtue of justice also suffers as we increase our use of armed drones. A preoccupation with technical legal issues regarding the use of lethal force risks diverting attention from the deeper and more significant form of justice that focuses on the harms done to relationships and how to heal them. Perpetuating this habit will likely increase other destructive patterns in our culture such as our high recidivism, divorce and suicide rates.

The strategies and tactics we engage in become practices, which in turn cultivate the habits of human persons and societies. Although John Brennan claims that armed drones satisfy the "principle of humanity," the analysis above indicates some deeper concerns and a fuller vision of "humanity" we should attend to. It should be made more clear that the use of armed drones is inconsistent with human dignity and, thus, with the fullness of human rights, and even more important, human flourishing.

Show Comments (
12
)
Comments are automatically closed two weeks after an article's initial publication. See our comments policy for more.
Beth Cioffoletti
7 years 8 months ago
Regardless of what drones do to them, killing others might not be good for us???
Carlos Orozco
7 years 8 months ago
Drones make waterboarding seem child's play, but don't expect any outrage soon. The public will only react when drones start targeting "terrorists" within the US.
David Smith
7 years 8 months ago
Please stop saying "we". None of us here are doing this. Almost none of the 300 million citizens in this country are doing this. A very small group of people in the US government are doing this. And it's despicable. And we don't need elaborate academic circumlocutions to define it and - so long as the perpetrators are Democrats - defend it or look the other way.
Beth Cioffoletti
7 years 8 months ago
I don't know how we can not say WE, David, when it is done in our name, by our government, in the supposed interest of protecting "us".
David Smith
7 years 8 months ago
Beth, "we" is a rhetorical device for spreading responsibility. It's inappropriate here. The American people aren't doing this - the President is doing this. The buck stops there.
Brian Nichols
7 years 8 months ago
The author's article outlines a few problems with drones. Unfortunately, none of them hit the mark (so to speak). "Increasing fear in communities..." The fact is, drones have the same effect in communities that strikes by aircraft or by cruise missiles do. There's no discernible difference. "Increasing impersonal engagements of conflict..." Again, aircraft strikes and attacks by cruise missiles would seem to suffer the same problem. "Avoiding the roots of conflicts..." The author indicates that there are some philosophical problems vaguely defined in our culture. Even more vaguely defined are how drone strikes are related to this problem. "Diminishing key virtues..." Let's look at this piece by piece: "Virtue of solidarity" The author suggests that funding drones somehow decreases resources dedicated to the poor and marginalized. Again, the author doesn't seem capable of distinguishing drones from any other military technology. The author's problem seems to be with military spending - not with drones in particular. "Virtue of courage" The author may have something of a point here: that the availability of drones discourages creative thinking when addressing international terrorist threats. Unfortunately, the author's understanding of the strategic use of drones seems limited. Passive, non-violence resistance may have toppled regimes "more sustainably" (a claim that seems somewhat specious in the grand sweep of history). But drones are not used to topple regimes: they are used to provide exact, precise strikes against particular targets. Thus, the likelihood that drones will somehow incapacitate our ability to topple regimes is marginal at best. "Virtue of justice" The author again fails to distinguish between the use of drones and the use of any other military technology. In a general sense, the author does put some considerations that should inform any discussion of war in general. The author rightly points to concerns that any people should have - especially a people that are responsible for the largest military in world history. But the author's analysis of drones in particular is generalized and of little use. As noted above, many of the author's arguments against drones could be levied against a number of military technologies. The author's concerns therefore seem more general than specific. If that's the case, why the hubbub? I suspect that this is mainly an emotional reaction. Drones sound scary. We don't need discussion based on some gut reaction to technology ("It's going to be 1984 before we know it!"). We'd do far better to engage in honest, careful and deliberate consideration of actual problems that society may face as drones become more of a fixture of our nation's military.
David Smith
7 years 8 months ago
I agree that there's a large emotional component in the reaction to the military use of drones among the civilian population, but emotions are a large part of any military response. If we don't care, we don't go to war. If we go to war, we care about how the war's being prosecuted. Pure cold logic never runs the show alone. From a purely pragmatic perspective, though, using drones in this way is suicidal. Once one side's used a new technology, the other side is ethically free to retaliate. That's a moot issue with aircraft carriers and long-range missiles, which are extremely costly to acquire, but drones are cheap and easily acquired. Once the US has used drones to attack civilian populations in other sovereign countries, what moral standing does the US have when the attacked countries attack back? If a Pakastani drone were to explode in a Manhattan cafeteria tomorrow - purportedly in pursuit of, say, an American spy - on what grounds could the US protest?
Stanley Kopacz
7 years 8 months ago
I thought posters sharing their great wisdom on this website had to put their full name to it.
Tim Reidy
7 years 8 months ago

BN, full name please per our policy. Future comments without a full name will be removed.