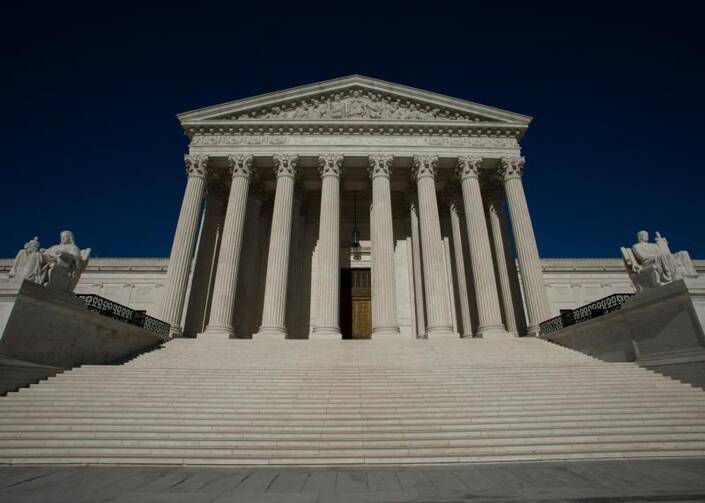 The Supreme Court ruled in a 5-4 decision on Jan. 27 that the Trump administration was free to implement a “wealth test” on immigrants while court proceedings against the plan proceeded. The new White House standard would block access to the United States and permanent legal status for immigrants who have relied on government assistance programs, including SNAP food benefits and Medicaid, or who are deemed likely to do so.

"We know that many immigrant families lawfully access important medical and social services that are vital to public health and welfare," wrote two U.S. bishops' chairmen in a statement released Jan. 29.

Archbishop Paul S. Coakley, chairman of the bishops' Committee on Domestic Justice and Human Development, and Bishop Mario E. Dorsonville, chairman of the U.S.C.C.B.'s Committee on Migration, wrote that the court's decision "will have devastating consequences for immigrant communities, as those impacted are cast into the shadows because the fear deportation and family separation" for pursuing needed aid.

"The Church upholds the dignity of all human life, and the Gospel compels us to serve those who are in need, regardless of their circumstances. ...We remain steadfast in Pope Francis's call to welcome, protect, promote and integrate our immigrant brothers and sisters," reads the statement.

The Church upholds the dignity of all human life, and the Gospel compels us to serve those who are in need, regardless of their circumstances.

Catholic Charities USA condemned the decision, calling it “harsh and unnecessary.” Donna Markham, O.P., the president and chief executive of Catholic Charities USA, said in a statement, “We will be judged on how we treat the hungry, the homeless and the stranger among us and this decision signals a watershed change of course from the best moments of our American heritage of welcoming immigrants and refugees.”

In a statement released on Jan. 27, the Catholic Legal Immigration Network (CLINIC) noted that the “core legal arguments” against the Trump plan are still pending a final decision by the 2nd U.S. Circuit Court of Appeals. “The 5-4 order reversed the only remaining nationwide injunction blocking implementation of the new rule, while legal challenges continue in several federal court,” CLINIC noted. Another injection currently blocks the rule from taking effect in Illinois.

Acting Deputy Secretary of Homeland Security Kenneth Cuccinelli welcomed the decision. “It is very clear the U.S. Supreme Court is fed up with these national injunctions by judges who are trying to impose their policy preferences instead of enforcing the law,” he said.

White House Press Secretary Stephanie Grisham also supported the ruling. “This decision allows the government to implement regulations effectuating longstanding Federal law that newcomers to this country must be financially self-sufficient and not a ‘public charge’ on our country and its citizens,” she said in a statement on Jan 27.

The U.S. Conference of Catholic Bishops has criticized the “public charge” rule in the past. In a statement released in August, the bishops complained that it would “undermine family unity and lead many lawful immigrants to forgo vital assistance, including enrollment in nutrition, housing, and medical programs.”

“Families already in the U.S. will be faced with deciding whether to access critical assistance programs for which they qualify, knowing that in doing so they could jeopardize their ability to stay here with their loved ones,” the bishops said, “and, it will reduce the ability of many to reunify with family in the U.S.”

At press time it was unclear if the U.S. Conference of Catholic Bishops would issue a statement on the court decision, but the conference has criticized the “public charge” rule in the past.

They added: “We have already seen the culture of fear that the anticipation of this rule has created in our communities. Ultimately, we believe that this rule is in tension with the dignity of the person and the common good that all of us are called to support.”

Pope Francis has repeatedly urged support for immigrants and mercy toward asylum seekers. “Loving our neighbor as ourselves means being firmly committed to building a more just world, in which everyone has access to the goods of the earth, in which all can develop as individuals and families, and in which fundamental rights and dignity are guaranteed to all,” the pope said last September from St. Peter’s Square during the 105th World Day of Migrants and Refugees.