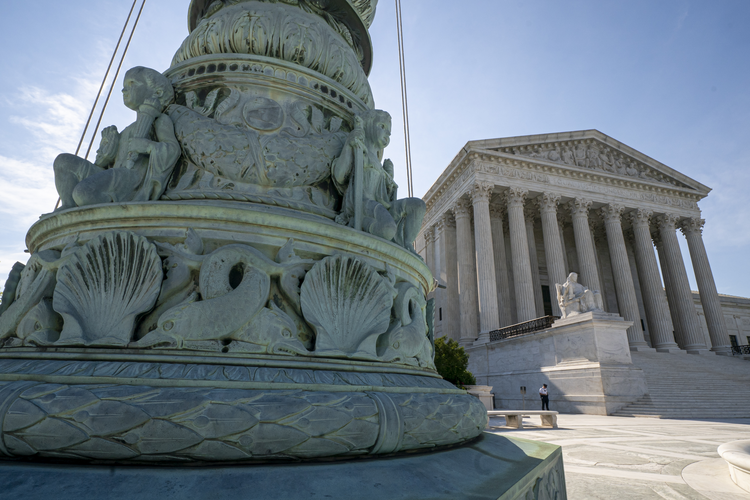 In this June 17, 2019 file photo, The Supreme Court is seen in Washington. Abortion rights, and protections for young immigrants and LGBT people top an election-year agenda for the Supreme Court. Its conservative majority will have ample opportunity to flex its muscle, testing Chief Justice John Roberts’ attempts to keep the court clear of Washington partisan politics. (AP Photo/J. Scott Applewhite)

WASHINGTON (AP) — Abortion rights as well as protections for young immigrants and LGBT people top an election-year agenda for the Supreme Court. Its conservative majority will have ample opportunity to flex its muscle, testing Chief Justice John Roberts' attempts to keep the court clear of Washington partisan politics.

Guns could be part of a term with plenty of high-profile cases and at least the prospect of the court's involvement in issues revolving around the possible impeachment of President Donald Trump and related disputes between the White House and congressional Democrats.

The court also could be front and center in the presidential campaign itself, especially with health concerns surrounding 86-year-old Justice Ruth Bader Ginsburg.

Its biggest decisions are likely to be handed down in late June, four months before the election.

If last year was a time for the court to maintain a collective low profile following Justice Brett Kavanaugh's stormy confirmation, the new term marks a return to the spotlight.

"The court seemed to do everything it could to rise above the partisan rancor," said David Cole, the national legal director for the American Civil Liberties Union. "This term, it's going to be harder for the court."

How far the court is willing to go in any case that is likely to divide the liberal and conservative justices probably will come down to Roberts. He is essentially the court's new swing justice, a conservative who is closest to the court's center. He also has spoken repeatedly against the perception that the court is a political branch of government, much like Congress and the White House.

Last term, on the same day in late June, Roberts joined the conservatives in ending federal court challenges to partisan electoral maps and sided with the liberals to block the administration from adding a citizenship question to the 2020 census.

The new term might pose the sternest test yet of Roberts' stewardship of the court. Roberts also would preside over any Senate trial of Trump, if the House impeaches the president.

The justices return to the bench Monday with cases about whether states can abolish an insanity defense for criminal defendants and allow non-unanimous juries to convict defendants of some crimes.

The next day, they will take up two cases about whether federal civil rights law protects LGBT people from workplace discrimination. They are the first rights cases since the retirement of Justice Anthony Kennedy, who provided the fifth vote for and wrote the court's major gay rights decisions.

With Kavanaugh in Kennedy's place and Trump's other appointee, Justice Neil Gorsuch, also on the bench, the outcome is far from certain. The Trump administration also has reversed the Obama administration's view that LGBT people are covered by the Title 7 provision of the 1964 Civil Rights Act that prohibits workplace discrimination on the basis of sex.

"It would be huge for the LGBT community to have protection in the private sector from employment discrimination," said Paul Smith, a veteran Supreme Court litigator who has argued past gay rights cases.

Legislation is pending in Congress that would remove any doubt about Title 7's application in cases of sexual orientation and gender identity, but is unlikely to pass the Republican-controlled Senate.

In November, the justices will hear arguments over the Trump administration's plan to end the Obama-era program that has protected roughly 700,000 young immigrants from deportation and provided them with permits to work in the United States legally.

Lower courts have so far blocked the administration from ending the Deferred Action for Childhood Arrivals program.

As in the LGBT rights cases, the court fight over DACA could be made irrelevant by congressional action authorizing the program. But Congress seems unlikely to do anything before the court rules.

The abortion case probably will be argued during the winter and is another test of whether the change in the court's composition will result in a different outcome. The Louisiana law that forces abortion providers to have admitting privileges at local hospitals is virtually the same as a Texas law the court struck down in 2016, when Kennedy joined the liberal justices to form a majority.

Roberts dissented in 2016, but he voted with the liberals in February to block the Louisiana law, at least temporarily. It was a rare vote against an abortion restriction that could point up the tension between Roberts' legal views on abortion and his institutional interests in upholding even prior decisions with which he disagrees.

Apart from its lineup of big cases, the court itself could be an issue in the unfolding presidential campaign. Some Democrats and liberals are talking about structural changes to increase the size of the court or limit the terms of future justices.

The 2016 campaign played out amid a Supreme Court vacancy following Justice Antonin Scalia's death in February. While Senate Republicans blocked any consideration of President Barack Obama's nomination of Judge Merrick Garland, Trump released a list of potential nominees and about one-quarter of Trump voters said the Supreme Court was the most important factor in their vote for him.

Senate Majority Leader Mitch McConnell, R-Ky., has said Republicans would confirm a Trump nominee to the Supreme Court, even if a vacancy arose during 2020.

Election-year retirements are very unusual, and the two oldest justices, Ginsburg and 81-year-old Stephen Breyer, would not want to give Trump a third high court seat to fill. Both were appointed by President Bill Clinton, a Democrat.

But Ginsburg has had two bouts with cancer in less than a year, including radiation treatment in August for a tumor on her pancreas. She has kept up a steady stream of public appearances to signal that she is still here. The events, she said, energize her. "When I am active, I am much better than when I am just lying about feeling sorry for myself," she said at an appearance in New York.

She's hardly alone on the lecture circuit. Justice Sonia Sotomayor and Gorsuch have been out trying to drum up sales for their new books. Even the newest justice, Kavanaugh, will raise his profile somewhat. He is scheduled to be the principal speaker at the Federalist Society's November dinner in front of more than 2,000 people.

The Court's defense of capitalism will continue. Trump will quit when SCOTUS refuses to take the case. Gay employment rights will expand, LA trap will be repealed and current attempt to overturn Roe will be squashed in either majority opinion or concurrence. As usual, pro-life voters will take speaking truth to be pro-abortion rather than explaining reality, mostly because their myth is about voting GOP, not life. Their means has become their end. As for DACA, defeating it clips the power of the presidency. Rumplestiltskin.

I wish I could be as optimistic as you are, but Clarence Thomas cant stay on the toilet until 2030.

I wish I could be as optimistic as you are, but Clarence Thomas cant stay on the toilet until 2030.