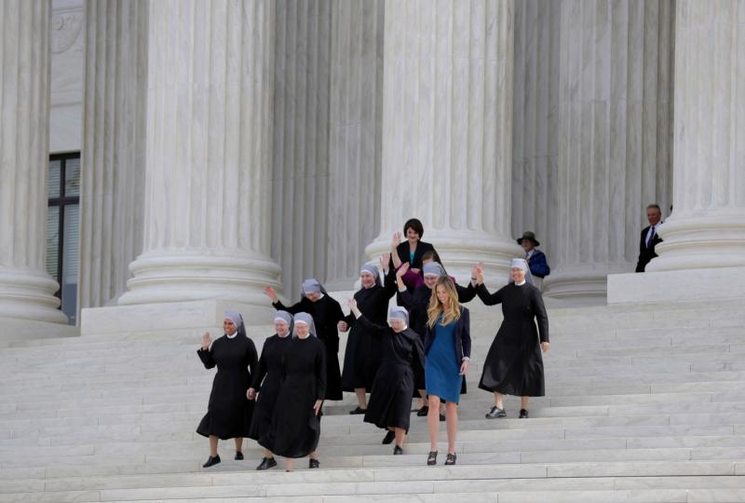 A group of Little Sisters of the Poor are joined by other women as they walk down the steps of the U.S. Supreme Court in Washington in 2016 after attending oral arguments in the Zubik v. Burwell contraceptive mandate case. (CNS photo/Joshua Roberts, Reuters)

WASHINGTON (CNS) -- The Little Sisters of the Poor are once again going to the Supreme Court.

The order of women religious who care for the elderly poor have been down this road before, twice defending their right to not comply with the government's health law requiring employers to provide contraceptive coverage in their health plans.

Now the court is about to look at the Affordable Health Care's contraceptive mandate from a different angle, examining if the Trump administration can legally allow religious employers to opt out of the mandate.

In 2013, religious groups and houses of worship were granted a religious exemption by the Supreme Court from the government's mandate in the Affordable Care Act to include coverage of contraceptives and abortion-inducing drugs in their employee health plan.

Three years later, religious nonprofit groups challenged the requirement they comply with the mandate and the court sent the cases back to the lower courts with instructions for the federal government and the challengers to try to work out a solution agreeable to both sides.

HHS provided this exemption in 2018, but several states challenged it, including California, Pennsylvania and New Jersey, saying HHS didn't have the power to give this exemption.

The states of Pennsylvania and New Jersey obtained a nationwide injunction against the rules protecting religious objectors from the contraceptive mandate; that injunction was then upheld by the 3rd U.S. Circuit Court of Appeals, based in Philadelphia.

This is where the Little Sisters come in. They appealed the circuit court's ruling and asked the Supreme Court to step in.

In one of the two consolidated cases, Trump v. Pennsylvania, the administration has argued that the exceptions to the contraceptive mandate for religious groups were authorized by the health care law and required by the Religious Freedom Restoration Act, known as RFRA.

Lawyers for Pennsylvania and New Jersey said the administration lacked statutory authority to issue such regulations and said the government did not follow proper administrative procedures.

The second case will examine if the Little Sisters of the Poor had the standing to appeal the 3rd Circuit ruling since a separate court order had already allowed them to refuse to provide contraceptive coverage in their employee health plans.

"It is disappointing to think that as we enter a new decade we must still defend our ministry in court," said Mother Loraine Marie Maguire of the Little Sisters of the Poor. "We are grateful the Supreme Court has decided to weigh in, and hopeful that the justices will reinforce their previous decision," she said in a statement.

Mark Rienzi, president of Becket, a nonprofit religious liberty law firm that represents the sisters, agreed, saying: "It is time for the Supreme Court to finally put this issue to rest."

The oral arguments, which will be heard by the court later this spring are the combined cases of Little Sisters of the Poor Saints Peter and Paul Home v. Pennsylvania and Trump v. Pennsylvania.

The U.S. Conference of Catholic Bishops filed a friend-of-the-court brief Nov. 1, siding with the Little Sisters of the Poor and stressing that the court needs to set the record straight particularly with its interpretation of the Religious Freedom Restoration Act.

RFRA -- which says, "Governments should not substantially burden religious exercise without compelling justification" -- was passed by Congress in 1993 and signed into law by President Bill Clinton.

The USCCB brief said there was a compelling need to review this case not only because the 3rd Circuit Court decision conflicts with other Supreme Court rulings on this topic in Hobby Lobby and Zubik decisions, but because its ruling "threatens to reduce one of America’s leading civil rights laws to virtual impotence," referring to RFRA.

This case, like previous ones, it said, asks if RFRA protects the Little Sisters of the Poor and other religious employers from federal regulations requiring most large employers to include contraceptive coverage in their healthcare plans.

It emphasized that RFRA essentially hangs in the balance because the appeals court "adopted a grudging interpretation of the statute that will, unless reversed, too often deny protection for religious people and institutions."

"Only this court's intervention can ensure that RFRA remains a meaningful security for religious freedom," it added.

Show Comments ()
Comments are automatically closed two weeks after an article's initial publication. See our comments policy for more.
Provide feedback on this article
Join the conversation: Login or create an account
Before you can comment, you need to update your profile to include your first and last name, as required in our comments policy. Then reload this page and you'll be set up for commenting. Update your profile
Advertisement
More: US Church / Women Religious / Supreme Court / Contraception