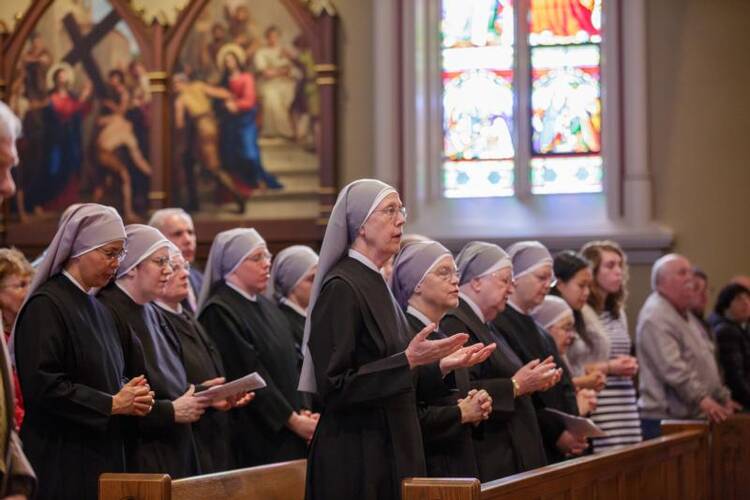 Members of the Little Sisters of the Poor pray during Mass in 2016 at the Basilica of the Sacred Heart at the University of Notre Dame in Indiana. The Little Sisters of the Poor were in federal court Oct. 19 defending themselves in a new lawsuit by California Attorney General Xavier Becerra, who is attempting to strip the nuns of their religious exemption to the HHS mandate. (CNS photo/Peter Ringenberg, Notre Dame Center for Ethics and Culture)

SAN FRANCISCO (CNS) -- The 9th U.S. Circuit Court of Appeals based in San Francisco heard oral arguments Oct. 19 in a lawsuit that aims to overturn a 2017 federal regulation expanding the exemption to the federal contraceptive mandate to include the Little Sisters of the Poor and other religious employers.

"We pray that the court will protect our ability to continue serving the elderly poor as we have for over 175 years without being forced to violate our faith," Sister Theresa Gertrude, a member of the Little Sisters, said in a statement.

The religious order is being represented by Becket, a religious liberty law firm, in the State of California v. Little Sisters of the Poor. The sister's lawyers argue that the states have no right to challenge the regulation. A decision from the 9th Circuit is expected sometime next year.

The religious order has been in the spotlight for the past several years because of the sisters' moral objection to the Department of Health and Human Services' requirement that most religious employers cover contraceptives, sterilization and abortion-inducing drugs in their employee health plan. The mandate was put in place by HHS under the Affordable Care Act during the Obama administration.

From the outset, churches were exempt from the mandate, but not religious employers. The Obama administration had put in place a religious accommodation for nonprofit religious entities such as church-run colleges and social service agencies morally opposed to contraceptive coverage that required them to file a form or notify HHS that they will not provide it. Many Catholic employers still objected to having to fill out the form.

The mandate had faced numerous legal challenges from religious organizations, including the Little Sisters of the Poor.

The mandate had faced numerous legal challenges from religious organizations, including the Little Sisters of the Poor.

A combined lawsuit, Zubik v. Burwell, made its way to the U.S. Supreme Court, where the justices in May 2016 unanimously returned the case to the lower courts with instructions to determine if contraceptive insurance coverage could be obtained by employees through their insurance companies without directly involving religious employers who object to paying for such coverage.

Days after the rules were issued, Pennsylvania and California filed complaints against the federal government over the exemption. Delaware, Maryland, New York and Virginia joined California's lawsuit to become the first plaintiff group to file a motion for a preliminary injunction seeking to prevent the new exemption rule from going into effect.

In his lawsuit, California Attorney General Xavier Becerra said the HHS ruling providing the religious exemption violates constitutional amendments because it allows employers to use religious beliefs to discriminate against employees and denies women their rights to equal protection under the law.

On Dec. 12, 2017, the Little Sisters argued in an Oakland, California, district court for the right to participate in the case and receive protection from government fines. On Dec. 29, that court granted their motion to intervene in the case.

In January 2018, the Little Sisters appealed to the 9th Circuit to overturn a federal judge’s decision to invalidate the new HHS rule protecting the religious order. On April 9, Becket filed its brief in the case.

The firm has argued all along that the government has many ways to provide services to women who want them as well as protect the Little Sisters: "Neither the federal government nor the state governments need nuns to help them give out contraceptives."

The Supreme Court ruled UNANIMOUSLY that the government had to find a way to provide these things without the participation of the Little Sisters. Considering that fact that there are exemptions for ExxonMobil, Chevron, Visa Inc., PepsiCo., the US military, NYC, etc. (one in three Americans do not have a health plan that satisfies the mandate), it is clear it can be done.