Why are so many craters on the moon named after Jesuits? 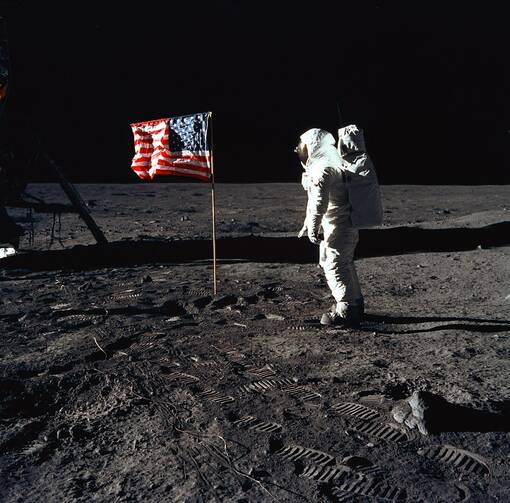 Fifty years ago this month, Neil Armstrong took his first steps on the moon. Centuries earlier, in 1651, the Jesuit astronomer Giovani Riccioli was mapping and naming the craters on the moon that astronauts would one day see in person. At the top of his map of the moon, Riccioli wrote, “Neither do men inhabit the moon nor do souls migrate there.” He was one in a long line of Jesuits who devoted their lives to questions not only about souls, but also about asteroids, meteorites and stars.

In his address to the Jesuits at their 35th General Congregation in 2008, Pope Benedict XVI said, “The church needs you, relies on you...to reach those physical and spiritual places which others do not reach or have difficulty in reaching.” From the earliest days of the order, Jesuits have been reaching those physical and spiritual places—even in space.

“Throughout the history of the Society, the Jesuits have been key players in astronomy,” said Robert Macke, S.J., a specialist in meteorites who works at the Vatican Observatory in Rome. Jesuit contributions to astronomy are significant enough that 34 craters on the moon and several asteroids are named after them.

“Throughout the history of the Society, the Jesuits have been key players in astronomy.”

In fact, one of the moon’s largest crater formations is named for Christopher Clavius, S.J. (1538-1612). His astronomical and mathematical genius played a major role in the formation of the Gregorian calendar, the calendar system in almost universal use today. During his lifetime, he was referred to as the “Euclid of the 16th century,” and he wrote textbooks that were read all over the world.

Among those who learned from Clavius was Galileo, with whom he carried on a significant correspondence. Galileo relied on other Jesuits as well. Paschal Scotti, in his 2017 book Galileo Revisited, writes that “up until 1616 the Jesuits had been the greatest support to Galileo, and time and again he turned to them as the beacons of scientific excellence and integrity in all his difficulties.”

But another Jesuit, Cardinal Robert Bellarmine, played a key role in the beginnings of the Galileo Affair. Bellarmine, on behalf of the Holy Office, was asked to inform Galileo that he had been accused of heresy. He encouraged Galileo either to present heliocentrism only as a hypothesis or to provide sufficient evidence to prove that the earth rotated around the sun. Galileo, although he was right, did not have enough proof to satisfy the standards of the natural philosophy of the day.

More than a century later, it would be Roger Boscovich, S.J. (1711-87)—a physicist and astronomer credited with developing a precursor to atomic theory—who would persuade the Vatican to remove the works of Copernicus, whose heliocentric theories Galileo championed, from a list of prohibited books.

The Jesuit tradition of astronomical discoveries continued with Angelo Secchi, S.J. (1818-78). He was the first to systematically classify stars using spectroscopy, breaking starlight into its component colors. “His classification scheme was later borrowed and expanded by the Harvard Observatory to create the classification system that is still used today,” Brother Macke said.

Jesuit contributions to astronomy are not confined to the past. The work continues today at the Vatican Observatory, which is entrusted to the Jesuits.

During his time as director of the Roman College, Secchi built an observatory on the roof of St. Ignatius Church in Rome. He studied sunspots and made important connections between solar activity and changes in the earth’s magnetic field. His book on the sun “was one of the definitive works of its day,” Brother Macke said.

But Jesuit contributions to astronomy are not confined to the past. The work continues today at the Vatican Observatory, which is entrusted to the Jesuits. According to Brother Macke, Richard D’Souza, S.J., and his collaborator from the University of Michigan, Eric Bell, recently discovered that the nearby Andromeda galaxy merged with another galaxy about two billion years ago.

Their work is no less remarkable than that of their Jesuit predecessors. Brother Macke, along with Brother Consolmagno, Father Kikwaya-Eluo, Father Boyle and Father George Coyne, former director of the Vatican Observatory, all have had asteroids named after them by the International Astronomical Union in recognition of their contributions to space exploration.

The Jesuits at the Vatican Observatory find themselves serving in mission territory. “Like Jesuits before us, we do science together, we pray together, there is no problem,” said Paul Mueller, S.J., a historian and philosopher of science. He thinks that in the modern world many people perceive science as more of an obstacle than a help to faith. “Our mission is to show by what we do and how we live that the church loves and appreciates science,” Father Mueller said.

“I serve as a sign that scientific pursuits and religious life go hand in hand,” agreed Brother Macke. “There is no conflict. My presence as a Jesuit scientist in public and at scientific meetings gives others the opportunity to engage me on questions of faith and science and to challenge their assumptions about the relationship between the two.”

These Jesuits are continuing a tradition that is not only astronomical but mystical. St. Ignatius, who also has an asteroid named in his honor, wrote in his autobiography that gazing at the stars gave him “the greatest consolation.”

Diego Laynez, one of the first Jesuits, wrote that at night St. Ignatius “would go up on the roof of the house, with the sky there above him. He would sit there quietly, absolutely quietly. He would take off his hat and look up for a long time at the sky. Then he would fall on his knees, bowing profoundly to God…. And the tears would begin to flow down his cheeks like a stream.”

Ignatius could not have imagined an observatory being built on the roof of a church that bore his name any more than Giovanni Riccioli could have fathomed a man walking on the moon he mapped. But 50 years after that “giant leap” for humankind, Jesuits continue to peer through telescopes in wonder, finding God in all spaces.

William Critchley-Menor, S.J., is studying philosophy and American studies at St. Louis University. He is a member of the Midwest Province of the Society of Jesus and is an editorial intern at America Media.