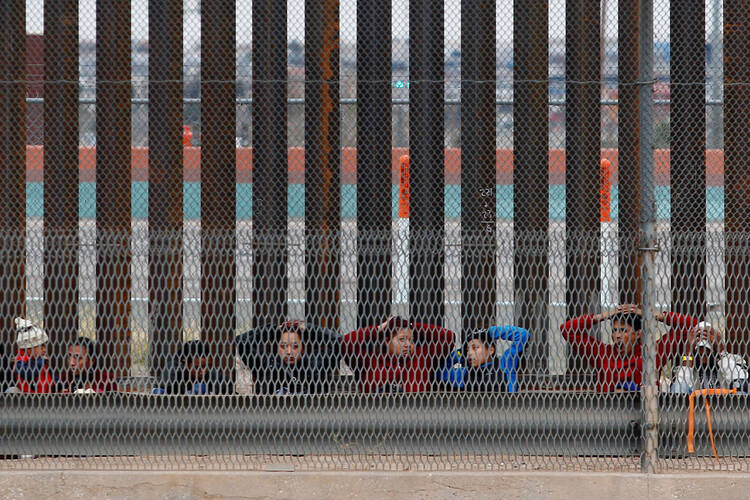 Migrants from Central America are being escorted by U.S. Customs and Border Protection officials after crossing the border from Mexico to surrender to the officials in El Paso, Texas, in this picture taken from Ciudad Juarez, Mexico, Feb.10, 2019. (CNS photo/Jose Luis Gonzalez, Reuters)

“We must implement an immigration system that will allow our citizens to prosper for generations to come,” Mr. Trump said, calling his proposal a “merit-based, high-security plan.” The president noted that a permanent border security trust fund and increasing the number of scanners at ports of entry would help counteract illegal border activity.

“Families are the foundation of our faith, our society, our history and our immigration system,” Cardinal Daniel N. DiNardo of Galveston-Houston, Tex., and president of the U.S. Conference of Catholic Bishops, and Bishop Joe S. Vasquez of Austin, Tex., chairman of the bishop’s Committee on Migration, said in a statement. They expressed their opposition to any plan that seeks to “curtail family-based immigration and create a largely ‘merit-based’ immigration system.”

While recognizing the importance of ensuring secure borders and safety, the bishops said neither will be achieved “by heightening human misery and restricting access to lawful protection in an attempt to deter vulnerable asylum-seeking families and children.”

Ashley Feasley, the director of migration policy and public affairs at the U.S. Conference of Catholic Bishops, said proposed cuts to family migration are “extremely disturbing.” She also noted that the proposal did not mention recipients of the Deferred Action for Childhood Arrivals program, an Obama-administration policy for undocumented immigrants who came to the United States as minors. Holders of Temporary Protected Status also went unnamed.

“Families are foundational to our immigration system and they always have been.”

“We do need a reform to our system, but it needs to include a plan for legalization of those who are undocumented,” Ms. Feasley said.

“It’s an anti-family proposal,” according to Kevin Appleby, a long time immigration advocate. “The church should be concerned. The changes he’s proposing would have families immediately deported back to dangerous countries. Instead of ensuring due process, he’s undermining it.”

Rather than family-based immigration and diversity visas, commonly referred to as the visa lottery, Mr. Trump wants to prioritize highly-skilled worker visas. Currently, the United States admits 12 percent of immigrants based on merit and skill, Mr. Trump said. He would like to see that increase to more than 57 percent and require immigrants to be “financially self-sufficient.”

Yet families actually have a positive impact on the economy, Mr. Appleby said. “Families take care of each other and are a social safety net for members,” he said. “They contribute to our country and facilitate social cohesion.”

Prioritizing merit-based immigrants might also have an undesired impact, Mr. Appleby said—U.S. college graduates could face more competition in the workplace. “If the economy is booming, then you really don’t need to make a change,” he said. The proposal is unlikely to pass the Democratically-led House and Mr. Appleby believes it is merely a “political document aimed at gaining reelection.”

“The church should be concerned. The changes he’s proposing would have families immediately deported back to dangerous countries."

Mr. Trump announced a proposal to end family-based migration during his 2018 State of the Union address, calling it “chain migration.” In response, Bishop Joe Vásquez of Austin, Tex., chairman of the U.S. bishops’ Committee on Migration, called family immigration “part of the bedrock of our country and of our church.”

“Upholding and protecting the family unit, regardless of its national origins, is vital to our faith,” he said.

Mr. Trump also proposed making it more difficult for asylum seekers to be admitted into the United States, which is consistent with the administration's previous policy. Asylum denial rates have continuously increased over the last six years.

Overall, however, Mr. Trump’s proposal would not lower the number of immigrants entering the United States, according to reports. A growing number of Americans are open to increases in legal immigration, according to a Pew Research Center survey released last summer. The survey found that few Americans believe undocumented immigrants take jobs that U.S. citizens want.

Most do not believe undocumented immigrants are more likely than U.S. citizens to commit crimes, according to the study. That belief is supported by recent research.

“Proposals to curtail or end family-based immigration or asylum protections are part of a dangerous narrative seeking to dehumanize our immigrant neighbors,” according to a statement from the Rev. John L. McCullough, the president and CEO of Church World Service.

“In fact, unified families bring stability to individual households and strengthen neighborhoods and communities. Family members help one another navigate a new culture, pursue job opportunities, start businesses and prosper economically, socially and spiritually. As faith communities, we know that every family deserves stability and security. Erecting even more barriers to family reunification would simply be wrong.”

This story has been updated with a statement from the U.S. Conference of Catholic Bishops.

President Trump's immigration plan is merit-based; something for which liberals foreswear against.

Way to go Bishop Joe Vasquez -- another reason to live in Austin.
Why does this poem still provoke tears?:
"Give me your tired, your poor,
Your huddled masses yearning to breathe free,
The wretched refuse of your teeming shore.
Send these, the homeless, tempest-tost to me..."
Has the world ever had as many "tempest-tost" as it does right now? And we are supposed to say, "What can you do for me? Got an engineering degree? Got rich parents?" I just read recently that our movie industry was born through the ingenuity and efforts of a bunch of non-English-speaking Jews, all born within a hundred miles of Warsaw. What they arrived with in NY was raw potential and the willingness to work. Talk about your "job-creators"! And pardon me, I just don't trust this gang that has taken over our government--I'm afraid they will view white skin as the most important "merit."

“Families have never been foundational to our immigration system !! Building our nation has been our foundation!!!

We bring in immigrants who will benefit our nation,
and even if we have emphasised 'family',
we must look at how 'open' immigration has destroyed the fabric of the EU....

We are NOT a 'sanctuary' country!!!

Where, I wonder, do all these mean-streak Catholics come from?

They been here all along. They jumped for Joy when our Church Leaders bashed Obama and Democrats because it fed their Political Ideology. They hid under the Tent of Abortion to justify their reasoning and to justify now their support for a Immoral President. They have chosen to set aside Christian and Catholic Teachings for the time being until the time they need it for eternal reward. Even Satan promises us good things for our souls. “ Satan’s Temptations to Christ were hedonism, egoism, and materialism”. Sometimes I wonder who did our Country really elect.

Will Nier
3 years 1 month ago

I would suggest Catholic leaders be careful with what they say about Trump. He is anti-abortion within the scope of the usual allowances. We could be stuck with a President and Congress that would allow abortion up to the time of birth. Like In New York State. Tread softly.

When are American Catholic Priests and Bishops going to start a serious discussion about abortion with they congregations and flock? They are more interested in being “accepted” and “liked” then standing up and open publicly against infanticide. It’s shameful!

Surprised at the comments.I am conflicted also.I believe in a rational plan to address immigration,since both sides have valid points.
One thing both sides should remember is that we as Catholics/Christians are called to respond to people with so little with love.It is simply what we say we are.

Canada, the "true north" of liberalism, has a merit-based system. So does Australia. There is nothing in Catholic social justice theory that says immigration is unqualified right, particularly of extended families (siblings and their kids, grown adult children, grown adult children of sponsors who haven't bothered yet to become American citizens themselves). If the Catholic Left was not so busy making rhetorical flourishes and willing to discuss issues, we could perhaps find common ground. But when it acts like the 1965 Immigration Act is somewhere between the 11th Commandment and the third testament, then one must simply ignore such politicking in the name of "faith."