What is behind America’s changing views on immigration? 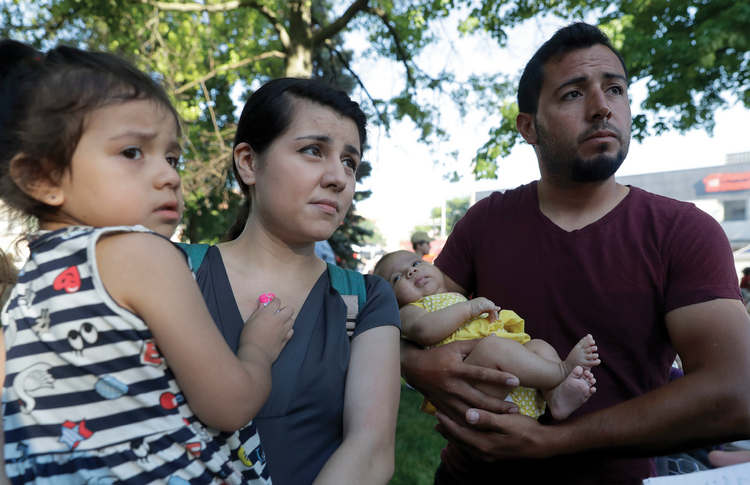 Pepe Urzua, a roofer who arrived from Mexico eight years ago, cradles his two-month-old daughter, Luna, as his wife, Betty, holds their daughter, Scarlet, during the a street festival in Goshen, Ind., on June 1, 2018. (AP Photo/Charles Rex Arbogast)

A growing number of Americans are open to increases in legal immigration, according to a new Pew Research Center survey.

“People understand that the country needs to welcome immigrants and that they’re part of our growth—both economically and socially,” said Kevin Appleby, senior director for international migration policy at the Center for Migration Studies of New York.

“People understand that the country needs to welcome immigrants and that they’re part of our growth—both economically and socially.”

Mr. Appleby credits the ongoing immigration debate for the change in public opinion. He also believes that the U.S. bishops are breaking through.

“The recent developments on the border have only increased these views,” he said, referring to the ongoing crisis of thousands of children being separated from their parents in immigration detention centers.

Immigration views are changing despite the ongoing political discourse that misconstrues the facts, Mr. Appleby said. “Facts have a longer life,” he said. “Once you parse through the rhetoric, you see the immigrant worker complements the U.S. economy. They create jobs. Those in business acknowledge this. Immigration is part of a robust economy.”

The positive trends detailed in the Pew report could create momentum for immigration reform during the next Congress, he said.

While the survey found that fewer Americans than just a few years ago see granting undocumented immigrants legal status as a “reward” for bad behavior, fewer than half of Americans knew that most immigrants are in the United States legally. The Pew survey found that Republicans, particularly those over 50, were more likely than Democrats to favor reductions in legal immigration. Legal immigration is always the preferred method, Mr. Appleby said, because it enables immigrants to integrate more efficiently and build the economy.

“Once you parse through the rhetoric, you see the immigration worker complements the U.S. economy. They create jobs.”

“You’re always going to have a core group of people who are nativist in their views,” Mr. Appleby said.

Father Smith suggested Americans’ perceptions are changing as they get to know individual immigrants. “People are beginning to recognize that you can’t lump them all together,” he said.

“It starts with listening to them tell their story,” he said. “One mother told me the gangs killed her husband and threatened her. Another family came after the gangs were trying to force their teenage daughter to join—to basically become their sex slave.”

Father Smith said he has met with hundreds of immigrants from Guatemala and Honduras who are fleeing violence. Many are not trying to enter illegally but are formally requesting asylum at U.S. ports of entry.

“It’s a story people want to hear because it’s a human story. It touches people’s hearts,” he said. “The people who are coming are not violent. They want to be safe. And they’re willing to work and work hard.”

Over the last six months, the center has hosted 350 undocumented immigrants and refugees at a cost of about $17,000. But the center also raised $16,000 in donations, another encouraging sign, Father Smith said.

Another poll released in July found a majority of U.S. voters—58 percent to 39 percent—disapproved of President Trump’s handling of immigration. The Quinnipiac University National Poll found that U.S. voters considered separation of children from their families a violation of human rights, and 83 percent consider it the Trump administration’s responsibility to reunite families separated by immigration officials during what turned out to be a short-lived border policy.

Consuelo Tovar, a member of the Daughters of Charity who works with immigrants in San Antonio, Tex., believes news of the separation of children from their parents had done a lot to change the conversation.

“No one wants to see children separated from their parents,” she said. She credits the work of community organizers and interfaith groups that have organized against anti-immigrant laws and dispelled immigration myths.

Sister Tovar said that many still hold the erroneous belief “that immigrants are taking their jobs.”

“[Politicians] are pitting the poor against the poor, low-wage workers against low-wage workers,” Sister Tovar said. “That’s not what America is about. It’s about welcoming people to new opportunities for themselves and their families.”

Such myths can be countered by the stories of individual immigrants, she said. “Seeing the real human face” of “our suffering migrants, who are fleeing for their lives from Central America,” Sister Tovar said, “has helped put the face of the suffering Christ in the news today.”

“If that doesn’t move you, I don’t know what will.”

A National Public Radio-Ipsos poll, conducted June 19-20, also found that that Trump administration policies were unpopular among Americans. The poll reports pronounced divisions among voters by party and, to a deeper extent, by TV news source.

When it came to spending $25 billion on border security, for example, more than 75 percent of Republicans were in favor, compared with less than 20 percent of Democrats. Only a quarter of Fox News viewers believed receiving refugees was a “moral obligation,” according to the poll.

“People who get their news from Fox News actually take the strongest anti-immigrant position of any group we looked at in this survey,” Ipsos pollster Chris Jackson told NPR. Political affiliation or TV viewing habits were a stronger indicator of opinion than were being an immigrant or knowing someone who was an immigrant, he said, noting the president’s supporters “are very much behind him.”

Nevertheless, Sister Tovar believes advocates should focus on sharing the experiences of immigrants and refugees.

“These stories will get us much further, and they cut through political and other interests,” she said. “We can move toward understanding. That’s how it’s going to work. We have to make their stories real.”

Editor’s note: This story was first published online on July 10 and was updated with additional information and infographics on Aug. 7.

if the situation is so bad in Honduras and Guatemala why doesn't the USA have a foreign policy that addresses these problems locally--either via economic, diplomatic, humanitarian or military means--so that we address this problem of flight locally instead of waiting until the fleeing latinos show up at our border. Our current policies seem only to be economic--like trade agreements--but we end up dealing with only the effects of violence at our borders, instead of trying to fix the causes locally back home. We seem to have no problem going thousands of miles away to Iraq and Afghanistan to fight ill conceived and badly managed wars, but can't take care of problems on our own doorstep. If we help make Honduras and Guatemala a better place to live then people will want to stay there.

As the granddaughter of Polish and Lithuanian immigrants, I have nothing against new people coming into the US. My problem is the undocumented problem and our broken immigration system. Our legislators do not seem to care about governing as much as they do scoring political points, when they should be working together and compromising when necessary for both border security and humane treatment of people at the border. If we do not expand some visa programs and do not strengthen the border, more undocumented people will continue to come in, and they continue to be an underclass for generations. I think we also need some outreach in Central America to people who want to come here on legal methods, the pitfalls of using smugglers, and what could happen if they show up undocumented with kids. They need to know that they cannot qualify for most services until they are legally in the country. Until we fix the system, the problems will continue to proliferate for undocumented people.

Many Americans are now educating themselves on immigration & have learned for example, that seeking asylum is not a crime. And most of the foreign workers in this country are here legally. That US business interests are harmed when they do not have access to this job pool. They have also shown empathy in questioning themselves; if placed in the position of seeing their family killed or their children forced into a life of crime wouldn't they flee as well?

America has a spotty past regarding immigrants. It's good to see that when pushed, Americans are speaking out for their core values.

"center has hosted 350 undocumented immigrants and refugees at a cost of about...."
Father Smith is preaching that ignoring or breaking laws and aiding and abetting law breakers is acceptable and even required in the name of charity. Have the Catholic Bishops and priests decreed that they are above the immigration laws and judicial decisions of the legislative, executive and judicial branches of the United States government? Apparently they think so.