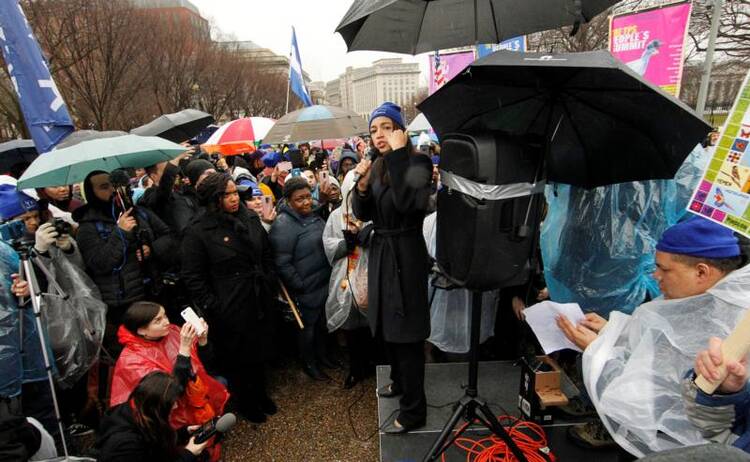 U.S. Rep. Alexandria Ocasio-Cortez, D-N.Y., addresses immigration rights activists during a rally calling for "permanent protections for Temporary Protected Status holders" in front of the White House in Washington Feb. 12, 2019. Due to a lawsuit, the Department of Homeland Security has extended TPS for El Salvador, Haiti, Nicaragua and Sudan to January 2020. (CNS photo/Jim Bourg, Reuters)

WASHINGTON (CNS) -- The Department of Homeland Security has filed notice that it is extending Temporary Protection Status for foreign nationals from El Salvador, Nicaragua, Haiti and Sudan until Jan. 2, 2020.

The notice, published in the Federal Register March 1, said the extension came in response to a preliminary injunction issued by the U.S. District Court for the Northern District of California in a lawsuit challenging plans to end the special status for migrants from the four countries.

Temporary Protected Status, or TPS, is a designation for those who come to the U.S. from certain countries because of a natural disaster, continuing armed conflict or other extraordinary conditions.

DHS announced in 2017 that it was ending TPS for recipients from the four countries in late 2018 and throughout 2019. Officials said conditions in those countries had improved and the migrants could safely return, even as the U.S. Department of State warned against travel to those nations.

Jill Marie Bussey, director of advocacy at the Catholic Legal Immigration Network, welcomed the extension in a statement March 1.

"We remain grateful to and inspired by the TPS holders and U.S. citizen children in this case challenging the legality of DHS’s decision to terminate TPS for these four countries," Bussey said.

"We remain grateful to and inspired by the TPS holders and U.S. citizen children in this case challenging the legality of DHS’s decision to terminate TPS for these four countries," Bussey said.

"We are mindful that the preliminary injunction is temporary in nature and tenuous as the government has sought to overturn it on appeal. Further, it does not provide the extension of protections to Hondurans, Nepalis or Liberians," she added.

Bussey also called on Congress to "provide the long-term solutions that are urgently needed to provide permanent protection" to TPS recipients and others in the U.S. under other special programs.

The series of announcements by the DHS met with an uproar from immigrant advocates, including Catholic leaders, and TPS recipients, who said serious challenges remained in each of the countries covered by the program because of crime, violence or little progress in response to devastating national disasters.

The federal court case in California challenged the DHS orders on El Salvador, Nicaragua, Haiti and Sudan, on grounds that the situation in each of the four nations had not improved and that tens of thousands of people would be in danger if they returned to their home countries. They also contended that the countries could not easily repatriate large numbers of people.