What’s in your cup of coffee? Capeltic, a Chiapas-based cooperative, is serving up dignity 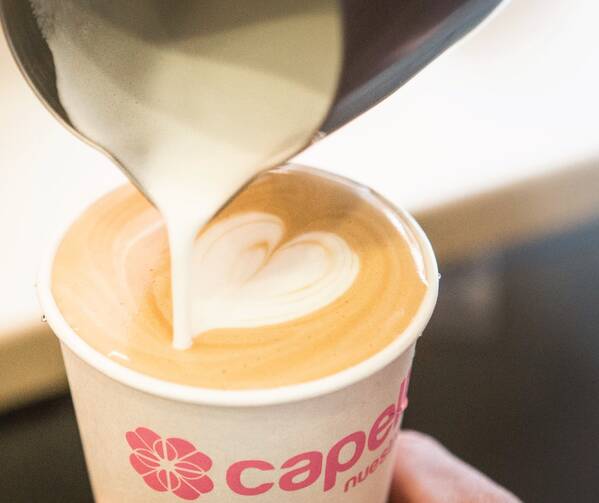 At first glance, Capeltic Nuestro Café seems like many of the hundreds of other stylish coffee shops Mexico City is known for. Tucked away in a quiet corner on the campus of the Mexican capital’s posh Iberoamericana University, a sprawling complex of brick buildings in the eastern Santa Fe neighborhood, it serves products now widely sought after among the rapidly growing middle class in the metropolis: coffee, tea, honey and pastries.

But the cafe serves up at least one difference from the other coffee haunts in the gentrifying neighborhoods of the Western Hemisphere’s largest city. “It’s not the cup of coffee itself that’s interesting, it’s the story behind it,” barista Omar Salcedo told America, not without a hint of pride in his voice.

Capeltic (meaning “'our coffee” in Tseltal Maya) is a member of Yomol A’tel, an umbrella group of cooperatives that aims to introduce a new way of doing business for indigenous farmers in Mexico. Bringing their product from field to coffee bar through these fair trade networks means coffee growers in one of the poorest areas in Mexico are less vulnerable to volatile commodity market price shifts. That offers them a standard of economic security that may keep them on the land. Capeltic’s founders believe its business model can be part of the solution to the grinding poverty that has driven hundreds of thousands of people in the region to migrate to the United States.

Capeltic was founded in 2001 by Óscar Rodríguez, S.J., now the director of the Instituto Superior Intercultural Ayuuk in Oaxaca, with a group of just 26 farmers. Local growers were seeking ways to sell more coffee and decided to ask for help at the Jesuit mission in Bachajón, a small town in the southern Mexican state of Chiapas. Some 600 miles southeast of Mexico City on the border with Guatemala, Chiapas is historically one of the poorest states in Mexico.

Bringing their product from field to coffee bar through these fair trade networks means coffee growers in one of the poorest areas in Mexico are less vulnerable to volatile commodity market price shifts.

Since that first experiment the cooperative has grown to include more than 340 farming families producing coffee for a company that eventually employed 86 workers. The business added a coffee shop in Mexico City in 2010, a roasting facility in 2013 and most recently coffee shops in Guadalajara and Puebla. Last year, Capeltic sold 360,000 cups of coffee, according to Alberto Irezabal, director of Yomol A’tel.

“We managed to become profitable with the coffee shops since year one,” said Mr. Irezabal. “With the roasting facility, we achieved [profitability] four or five years ago.”

Capeltic is now advised by Stephen Pitts, an American Jesuit and associate pastor and religious director at Sacred Heart Parish in El Paso, Tex. He was first introduced to the cooperative several years ago when he was looking for a project to evaluate while pursuing graduate work in international development economics at the University of San Francisco.

Before his master’s studies, he had spent four months as a Jesuit novice at a shelter for the poor in Tijuana. He explains that it was during his experience there that he was first exposed to the issue of migration, “which has been close to my heart ever since.”

“The price of the green coffee beans is very volatile, but the price of lattes has steadily gone up over the years,” said Father Pitts. “It’s something we call the ‘coffee paradox.’”

“Being involved with Capeltic is really neat for me because we deal with migrants every day,” he said. “I can also be involved in a project that is addressing the root causes of migration.”

Father Pitts traveled to Chiapas to conduct a quantitative study in the Yajalón region. He interviewed hundreds of coffee growers selling to Capeltic and hundreds more who were not connected to the cooperative. He came to some remarkable conclusions about the potential for success of a coffee-growing cooperative.

“Our research shows that farmers join the cooperative principally because of social capital, not so much because of individual factors such as people being younger or having more land,” Father Pitts told America. Social capital, in the context of Chiapas, principally means the prestige and strengthened communal ties individuals gain from participating in activities with institutions that command respect.

The Jesuit mission in Bachajón is one of them. Established in 1958, the mission has been deeply involved in improving lives of indigenous communities in Chiapas. According to Father Pitt’s research, the more local farmers interact with the mission, for example by taking courses there, the more likely they are to join the coffee cooperative.

The central highlands of Chiapas, where the majority of the population consists of indigenous Mayan groups such as Tseltales, is one of the most marginalized regions in Mexico. The largely rural population survives on subsistence farming and the meager income it can derive through cash crops like coffee. Unfortunately, for almost three decades wholesale coffee prices have been experiencing a significant decline.

Capeltic approaches the business differently by integrating producers into the total value generated by the supply chain, from beans in the field to the cups of coffee that will ultimately be sold in Mexico City, Puebla and Guadalajara.

“The price of the green coffee beans is very volatile, but the price of lattes has steadily gone up over the years,” said Father Pitts. “It’s something we call the ‘coffee paradox.’ The producers are not going to win at this game, so we have to change the game.”

Capeltic’s business model is also distinguished by its attention to solidarity, incorporating strategies that connect growers and consumers.

His research also finds that joining the cooperative offers indigenous growers market access they never had before. In traditional commodity supply chains, their coffee crop would pass through intermediary purchasers who, in the end, would claim most of its value. Participating in the cooperative, he reports, also incentivizes the farmers to grow better quality organic coffee since it earns them a premium price, a practice wholesale buyers of the past showed little interest in.

Beyond freeing farmers from commodity prices, Capeltic liberates the business model of coffee-growing from the profit-driven dictates of Western capitalism. The cooperative acknowledges and incorporates the spiritual and cultural characteristics of the local population into the coffee business. “There’s not a single person taking the decisions, it’s done collectively,” Mr. Irezabal explains. Collective decision making is a staple of local Mayan culture and central to the stability of local communities.

Capeltic’s business model is also distinguished by its attention to solidarity, incorporating strategies that connect growers and consumers. “We don’t walk alone,” said Mr. Irezabal. “We look for help from the Jesuits in the United States; we work very closely with universities in Mexico.

“Ultimately what’s moving us is the spirit, not only the money.”

Father Pitts explains that Capeltic’s farmer-members are seeking more than just better prices for their cash crop, but also dignity and autonomy. “They want to depend less on the Mexico government,” he said. And unlike a mainstream business that treats constant growth as a sacred duty, “they don’t want to buy more land and expand their business. Their interest is in harmony and price stability.”

With help from people and the church in Mexico, refugee caravan pushes on
Jan-Albert Hootsen

The profits of the cooperative are invested in a common fund for people who need emergency financial assistance when they have to deal with food shortages or health issues. It also maintains a microloan entity, which allows the farmers to take out low-cost loans without the crushing interest rates they might otherwise have to accept.

Because of the cooperative’s efforts, farmers in the region have been able to sell up to 25 percent more coffee, while generational debt (burdens passed down from parents to children) and seasonal labor migration to tourist resorts like Cancún have become less prevalent.

Capeltic has also given the farmers the unique possibility to get to know their own country beyond their small community in Chiapas, according to Mexico City barista Omar Salcedo.

“When we opened the coffee shop here…we actually got the farmers to Mexico City to allow them to try the [finished] product,” he said. “They always drank their coffee without cream, but here they tasted it with cream for the first time.”

He smiled. “They were very surprised at the result; it motivated them.”

All the best of luck to this example of free market capitalism at work. Freedom is the secret to success.