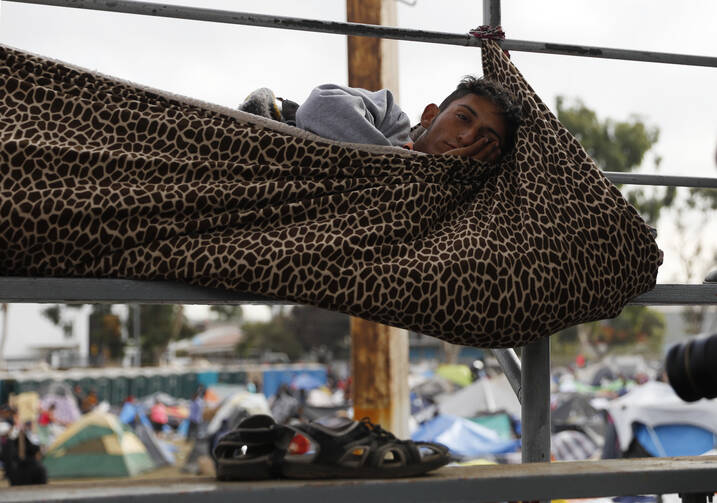 A migrant rests inside a blanket tied to keep him from rolling off the spectator stands at the Benito Juárez Sports Complex in Tijuana, Mexico. (AP Photo/Rebecca Blackwell)

Fabiola Díaz sighs in her small blue tent after her baby son, less than 2 years old, trips and falls over the cords of other tents and clotheslines. She coughs and points to her head. “I might have a fever,” the 25-year-old Honduran told America. “A lot of people here are sick, and having so many of us crammed together doesn’t help. Conditions aren’t the best, but I’m glad I have at least a place to stay.”

Life has become steadily more difficult in the open-air Benito Juárez Sports Complex in Tijuana, across the border from San Diego in the Mexican state of Baja California. Two weeks ago, the first members of the Central American refugee caravan finally arrived here, after a tortuous six-week journey north from San Pedro Sula in Honduras through Guatemala and Mexico, during which the thousands of migrants had become the subject of fierce political debate, both in Mexico and their longed-for final destination, the United States.

For now, their journey has come to a halt, tantalizingly close to the country they hope will accept them as asylum seekers. The rust-colored, thick metal bars that separate Mexico from its northern neighbor are literally less than a stone’s throw from most of the tents in the sports complex, just across a busy expressway.

For now, their journey has come to a halt, tantalizingly close to the country they hope will accept them as asylum seekers.

By the beginning of the week the camp already included more than 6,000 people from Central America, according to Tijuana municipal authorities, with more arriving each day. There may have been plenty of room to set up tents just a week ago, but by Nov. 29 nearly every square inch of the available space on the athletic fields was occupied.

Walking through the sea of tents without tripping has become challenging. In one corner of the camp, the drainage systems at several showers is unable to cope with their constant use, and a large puddle of shower water crawls toward nearby tents. On the other side, past a vast sea of tents crammed almost on top of each other, young Hondurans crowd around improvised charging stations for cellphones.

“I don’t think there’s room for more tents, but every day more people come in,” said José Marvin López, a 40-year-old construction worker from San Pedro Sula, the largest city in Honduras and the place where the caravan left for Mexico two months ago. “We’ll have to make do here, because we don’t know how long we’ll have to wait.”

Like most members of the caravan, Mr. López joined to escape the grinding poverty in his home country and seek a better life in the United States. He left his wife and four children and hopes he will be able to find a job, but he rejects the idea of becoming an illegal immigrant.

“I don’t think there’s room for more tents, but every day more people come in.”

“The only way to go is by getting legal asylum; it’s not good to go without papers,” he told America. “I don’t want to stay longer than a few years anyway. I just want to make enough money to support my family and return to Honduras.”

Ruth Dalila Sánchez, 42, who arrived here on Monday with her husband, also says she does not want to cross illegally. She used to run a small juice and fruit stand in Honduras but could no longer afford to stay after she was robbed multiple times this year.

“I was able to start my business with help from my father, but it was getting too dangerous to just work on the street, and the cost of living has become so expensive in Honduras that it was impossible to get by,” she said. “At one point I had to tell my grandchildren that we could no longer afford food. They would stay cheerful and tell me that they’d sleep the hunger off. It was heartbreaking.

“We need to be patient and not try to cross to the United States without papers,” she added. “We must be humble and hope God touches Donald Trump’s heart, so he will allow us in.”

Most Hondurans here say they believe they will eventually be able to get asylum in the United States, but few have any notion of how long that may take. (Applications for asylum have typically taken about six months to process, but that period could lengthen as the Trump administration tries to discourage migrants from applying.)

Meanwhile, the number of Central Americans arriving in the border town continues to rise. City authorities say the number of people at the shelter increases by about 100 each day, even as dozens per day volunteer to return to Honduras with the assistance of Mexico’s National Migration Commission.

City authorities say the number of people at the Tijuana shelter increases by about 100 each day.

The ever-increasing number of refugees is posing an unprecedented challenge, according to local and federal officials, who say that neither Tijuana nor Mexico’s federal government has ever had to deal with such a large number of people arriving at the city in such a short period of time.

The shelter at the sports complex is already filled to capacity, with dozens of Hondurans settling outside on the sidewalk, next to a street where hundreds of others stand in line for food handed out by the Mexican Navy or for medical attention from the Red Cross or volunteer organizations. A significant number of Central Americans have suffered from minor respiratory ailments and head lice, according to volunteers attending to the refugees, and they believe the situation may get worse with colder temperatures and rain.

“We have neither the experience nor the resources to handle what I would call a human rights crisis without proper assistance from the federal government,” said Tijuana mayor Juan Manuel Gastelúm. “They need to assume their responsibility.”

With help from people and the church in Mexico, refugee caravan pushes on
Jan-Albert Hootsen

Mr. Gastelúm has been the subject of criticism in recent weeks after he accused some Central American refugees of using drugs and being a nuisance to inhabitants of his city. The National Human Rights Commission (C.N.D.H.), an autonomous federal body, accused the mayor last week of discrimination and said his words were unacceptable coming from an elected public oficial. Mr. Gastelúm, in turn, said the C.N.D.H. is not allowing city officials to enter the compound and severely limits his capacity to deal with the refugee crisis.

The apparent lack of cooperation between municipal and federal authorities is further complicated by the change of government on Saturday, when president-elect Andrés Manuel López Obrador will be take the oath of office in Mexico City. It unclear what steps the incoming government will take to deal with the crisis, which is expected to worsen in months to come. Marcelo Ebrard, Mr. López Obrador’s future secretary of foreign relations, said on Wednesday that the U.S. government must help to create jobs in Central America to limit the number of people fleeing Guatemala, Honduras and El Salvador.

Whatever the new government does, it will have to act fast, according to Mr. Gastelúm: “Under the current circumstances, we’ll be able to manage the situation for a few more days.”

The refugees America spoke with at the Benito Juárez shelter said they are aware that they will likely be forced to stay there for months, but many still remain optimistic about their chances to find asylum in the United States.

“I don’t care how long I’ll have to wait, I’ll wait,” José Marvin López said, smoking a cigarette. “Patience will ultimately win. We are good people, all we want to do is work. I’m convinced Mr. Trump will see it that way too eventually.”