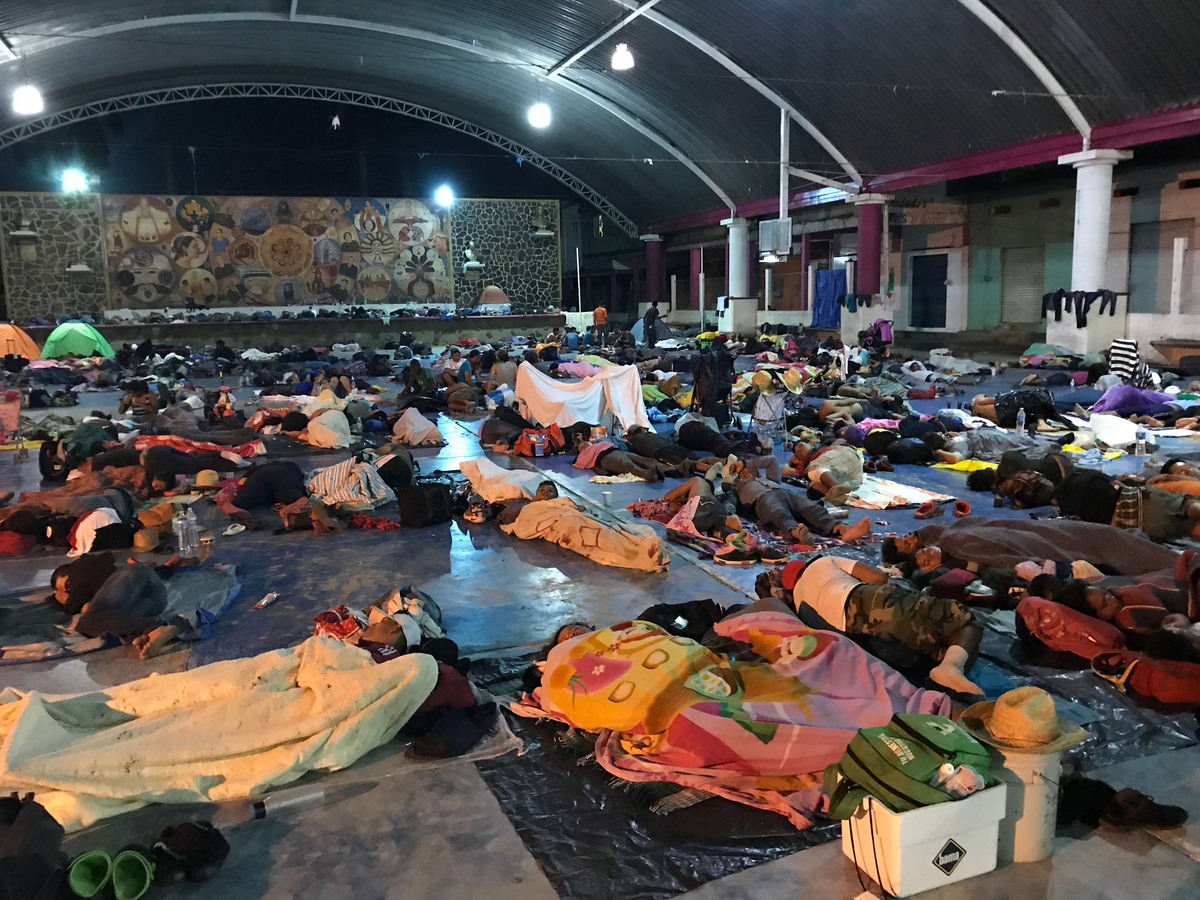 With help from people and the church in Mexico, refugee caravan pushes on

Hopping off the trucks they hitchhiked on, hundreds of Central Americans chanted “Sí se pudo!” (“Yes we could!”) as they arrived in the small town of Sayula, in the eastern Mexican state of Veracruz, on Nov. 2.

The caravan of several thousands of Central American refugees, mostly Honduran, continues to push north to the U.S.-Mexican border. For weeks, the refugees have made headlines as a symbol of the grinding poverty and criminal violence in much of Central America. They have also become a factor in the U.S. midterm elections, as President Trump vows to deny them the chance to apply for asylum and describes the group as an “invasion.”

For the several thousand members of the caravan, the trip has now entered its second stage, which leads them through Veracruz and Puebla to Mexico City. Difficult circumstances along the way are threatening to scatter the group, which initially decided to travel together to protect themselves from organized crime, corrupt officials and immigration authorities. On Saturday and Sunday, Nov. 3 and Nov. 4, several groups decided to push onward as quickly as possible from Sayula to Puebla and even Mexico City, wary of the dark reputation of central Veracruz as a place where migrants often fall victim to criminal gangs.

Many members of the caravan say that the generosity of Mexican citizens helps them keep moving to their destination, the U.S. border still some 1,500 miles to the north.

Many were relieved to reach Sayula, after having spent the previous night in Matías Romero, a town in the neighboring state of Oaxaca. They had gathered there on a soccer field but were soon surprised by torrential rains that flooded the improvised encampment. Soaked and with nowhere to go, the group scattered over town, trying to find shelter at storefronts or homes.

“It was dreadful. Everything was soaked,” said 45-year-old Honduran José Castellanos. He was sitting in front of a small orange tent by the side of the road in Matías Romero, surrounded by dozens of his compatriots.

“My wife and two sons are sleeping in the tent. They’re 3 and 4 years old,” he told America in a voice hoarse after spending hours in the rain. “They have a fever, but there’s no medical attention here.”

Many of the refugees America spoke with Thursday night in Matías Romero were apprehensive about the next day, when they would get up at 4 a.m. to continue their journey. The prospect before them was a grueling march of more than 60 miles on foot in the scorching heat of southern Mexico to Sayula. Several thousand managed to get there in less than 12 hours, however, as friendly truck and taxi drivers allowed them to hitchhike the entire distance.

“There’s no future for me in Honduras,” she said. “I know that wealth won’t fall from the sky in the U.S. You have to work hard, but with help from God I can make it there.”

Others were not so lucky and walked for miles, pushing strollers or carrying their children. There were complaints of younger men securing coveted spots on the trailers and flatbed trucks, while women, children and the elderly were forced to continue on foot.

Still, the sense of relief was palpable in Sayula, where aid groups, including several religious organizations, had hastily set up a large shelter at an abandoned market. There were showers, ambulances, improvised clinics, donated clothes, and food and water.

“The Mexicans have treated us well, thankfully,” said 17-year-old Yosselin Flores. “We’re not always welcome; in Matías Romero there was no one to provide attention, but we get food and water along the way, and people allow us to drive with them.”

Ms. Flores left her home in Minas de Oro, a small town in central Honduras, three weeks ago with her aunt and little sister, after she read on Facebook that a large group of refugees was gathering in San Pedro Sula to head to the United States. She told America she was fleeing poverty and threats from criminal gangs, and she hoped to be reunited with her father, who lives in Arizona.

“There’s no future for me in Honduras,” she said. “I want to study tourism, find a job and be independent. I know that wealth won’t fall from the sky in the U.S. You have to work hard, but with help from God I can make it there.”

“I didn’t like the idea of Central Americans coming here at first. I changed my mind when I saw them. We’re poor here, but these people have even less.”

Many members of the refugee caravan say that the generosity of Mexican citizens helps them keep moving to their destination, the U.S. border still some 1,500 miles to the north. They travel with little more than a backpack and perhaps the equivalent of a few dollars in their pockets. Along the way, they must watch out for human traffickers, organized crime colluding with corrupt law enforcement and Mexican immigration authorities. They face hunger, cold, and the possibility of deadly accidents, extortion, kidnapping and murder.

Some relief often comes from Mexican citizens offering to help along the way. A group of inhabitants of Jesús Carranza, a small town on the highway to Sayula, threw plastic bags of water to refugees hitchhiking on trailers and handed out plates of food to those passing by on foot.

“I didn’t like the idea of Central Americans coming here at first. There’s a lot of negative news about them on the radio,” Zuri Flores, 21, told America. “I changed my mind when I saw them. We’re poor here, but these people have even less.”

Other help comes from local church groups. In an Oct. 28 editorial in its weekly magazine Desde La Fe, the Mexico City Archdiocese called for the country to provide care and protection to the caravan.

A crisis of legitimacy continues in Honduras
Kevin Clarke

“In the migration, numbers aren’t at stake, but human lives, as Pope Francis constantly reminds us,” the editorial said. “To the Catholic church, no human being is illegal and this legitimate demonstration of thousands of people seeking survival with a minimum of decency in their standard of living constitutes a cry of denunciation of the silent and inhumane displacement, as national bishops have said, who have not hesitated to mobilize to provide help to the migrants.”

Meanwhile, the response of Mexican authorities has been slow and confused. President Enrique Peña Nieto, in a statement released on Oct. 26, tried to convince the refugees to stay in the southernmost states of the countries, offering them a temporary ID to seek asylum in Mexico that would allow them to seek medical attention and their children to attend school. The consensus of the caravan was to reject the plan, dubbed “Estás en tu Casa” (“You’re at Home”).

Veracruz Governor Miguel Ángel Yunes Linares provoked outrage among caravan members on Nov. 2, after announcing in a video released on social media that the Central Americans could not stay in his state and would be offered transportation to Mexico City in 160 buses. Minutes later, in a stunning reversal, he retracted the offer and asked the refugees to stay in in Veracruz, citing the lack of water in Mexico City due to maintenance operations to the capital’s water system. Angered by the governor’s about-face, the caravan decided to move on. It is now not as large as the group that left Honduras three weeks ago.

“Walking 30 miles per day is very hard, especially for the children in the group,” Josué Martínez, a 26-year-old student, told America. Like many others, he said he had to flee Honduras after he was threatened by a criminal gang. “We try to stay together, but some are going faster than others.”

They are ambassadors of the Good News. Caravans carry with them the potential to evangelize.

Just another article in America Magazine supporting the flouting of the immigration laws that naturalize more than a million new Americans each year. Oh, and a generous helping of self-righteous indignation about the injustice of national borders and the terrible uncharity of Americans who insist on preserving borders and immigration law. No humans on the other side, folks, just more evil nativist Americans.