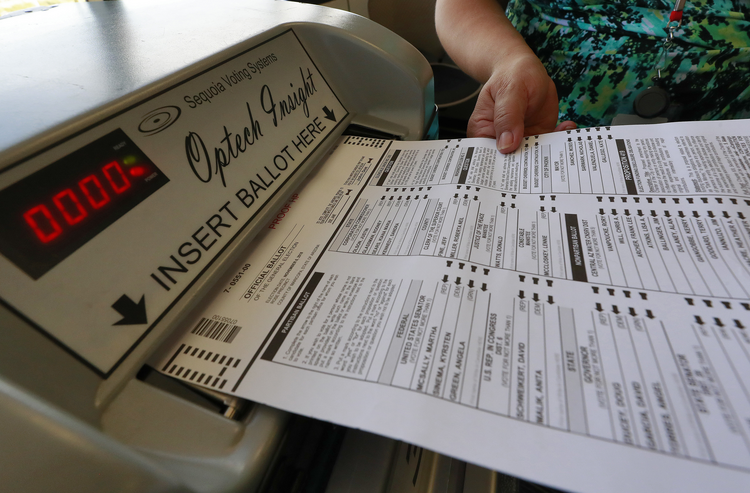 In Phoenix, Az., a Maricopa County Elections official feeds a ballot into a machine during a training session on Oct. 25. (AP Photo/Matt York)

As Americans prepare for Election Day next Tuesday, Nov. 6, when Democrats hope to flip Congress and President Trump seeks a thumbs up from the country on his policies, Catholic leaders and organizations are urging voters to consider how church teaching applies to a range of contentious issues, including immigration, taxes and health care.

In Utah, the Diocese of Salt Lake City threw its support behind a ballot initiative that would expand Medicaid to help cover the roughly 150,000 residents who currently cannot afford health insurance.

Jean Hill, the director of government relations for the diocese, said the Catholic Church in Utah has been pushing for an expansion of Medicaid for about five years, unsuccessfully lobbying legislators to implement the provision of the Affordable Care Act in the red state. She said it was “natural” that the diocese would be active on the issue now that voters will have a chance to weigh in.

“This is absolutely about dignity and sanctity of life,” Ms. Hill told America. “In order to live a life of dignity in this country, you need certain things, and one of those things is absolutely health insurance because you’re not going to be able to address a long-term medical issue without it.”

The expansion would be funded with a 0.15 percent increase in the state sales tax, which supporters say will collect about $91 million in extra revenue, giving Utah access to about $800 million in federal funding. Opponents of the measure point to Mr. Trump’s efforts to dismantle Obamacare as evidence that federal funds may not be available for long and urge voters to exercise caution when it comes to altering the state’s health insurance landscape.

The diocese has its work cut out for it when it comes to influencing public opinion in Utah. Just 5 percent of Utah’s population identifies as Catholic, according to the Pew Research Center, while 55 percent identify as members of the Church of Jesus Christ of Latter-day Saints. The numbers are even more daunting when it comes to the church’s potential to influence Utah legislators. A 2016 report in The Salt Lake Tribune found that 88 percent of state lawmakers are members of the L.D.S. church.

“I just want people to know the candidates as they really are, to know the pros and cons of all the issues, to make intelligent choices and not just simply vote this party or that party.”

But Ms. Hill said being a small church permits a sense of freedom in speaking out about moral issues, which it sometimes does in conjunction with leaders of other faiths in Utah, including Episcopalians, Baptists and Muslims.

“We are the second-largest church, even though we’re tiny, so we are recognized as an entity that speaks on these issues from a moral perspective,” she said. “In this very religious state, that perspective is valued even if it’s not an L.D.S. perspective.”

On the health insurance ballot measure, the L.D.S. church has not officially weighed in, though an editorial in a newspaper owned by the church urged voters to support the initiative.

“Expanding Medicaid as outlined in Proposition 3 would allow those in the coverage gap now to receive needed health care, introduce jobs and provide relief to the state’s addicted and homeless population,” read an editorial on Oct. 27 in The Deseret News. “It’s worthy of Utahns’ support.”

A poll conducted last month by The Salt Lake Tribune and the Hinckley Institute of Politics found that 59 percent of Utah voters support the initiative.

Bishop Oscar Solis, who was installed as the head of Utah’s only Catholic diocese last year, participated in a press conference with other faith leaders last month to support the initiative. He said, “Charitable works often require government support to ensure no person who is experiencing poverty or has clear vulnerabilities falls through the cracks.”

During the press event, which was held outside the headquarters of the diocese, Bishop Solis said that to support "dignity and sanctity of life, we need to provide for the basic needs of people, and that includes health care."

The Diocese of Salt Lake is hardly the only Catholic entity involved in the contentious midterm elections, as some Catholic leaders take a more one-on-one approach to influencing elections.

For months, the Religious Sisters of Mercy have taken to social media to encourage followers to register to vote and learn about issues important to the order. Sharon Schmitz, R.S.M., spent about a week, usually in the evening after dinner, researching candidates and ballot measures in her state of Missouri to create a voting guide that she distributes to other sisters, associates, staff and friends.

Sister Schmitz scores each candidate on what she says are three “scriptural issues,” which she identifies as nonviolence, care for the Earth and care for “people on the fringes of society,” highlighting the poor, immigrants, people of color and L.G.B.T. people.

“You can’t really believe what goes on in the TV ads, so many half-truths and untruths,” she said. “If people don’t have appropriate data then they’re going to make some poor choices.”

She relies on congressional voting records and surveys done by local media to create the guide. When she is unable to find what she needs online, she emails elected officials herself and even attends town hall-style meetings to get answers to her questions.

“I just want people to know the candidates as they really are, to know the pros and cons of all the issues, to make intelligent choices and not just simply vote this party or that party,” she said.

Catholic groups and leaders that regularly engage in the public square are not sitting out the midterms either.

Beginning in Santa Monica, Calif., the “Nuns on the Bus” tour wound through 21 states before ending near President Trump’s Mar-a-Lago Club in Palm Beach, Fla., on Nov. 2.

Simone Campbell, S.S.S., the executive director of Network, said the Palm Beach locale was chosen to demonstrate to the president and Congress that the tax cut law will add up to $1.9 trillion to the federal deficit in the next decade and that planned cuts in federal spending on non-military programs will harm the lives of low- and moderate-income people.

Meanwhile, the head of the anti-abortion group Priests for Life, the Rev. Frank Pavone, is offering a more partisan message than is typical among U.S. Catholic leaders. The controversial priest, who filmed a video ahead of the 2016 election that included placing what he claimed was an aborted fetus on an altar, is urging his followers to submit photos of themselves wearing so-called MAGA hats, a reference to red and white “Make America Great Again” baseball caps sported by President Trump. Father Pavone, who posted a photo of himself wearing one of the hats, also hosts a nightly show he has dubbed the “Fr. Frank’s #MAGA Prolife Election broadcasts.”

And when it comes to immigration—the issue that the president has tried to keep at the forefront of voters’ minds ahead of the election—many groups have weighed in to make sure Catholic teaching on migration issues is not lost in the debate.

“Our Catholic and American values call us to welcome those searching for safety and security,” Joan Rosenhauer, the head of Jesuit Refugee Services/USA, said in a statement, reacting to news that the Trump administration seeks to limit asylum claims from some people headed toward the United States from Central America. “We must, as a country, continue to provide access to due process for those fleeing conflict and violence. The least among us must be afforded the opportunity to be heard and to make a claim for protection.”

Finally, one of the most famous Catholic sisters in the United States wants election day fence-sitters to know that voting is how their voices can be heard. Sister Jean Dolores Schmidt, the chaplain of the Loyola University Chicago men’s basketball team who became a household name during the team’s championship run earlier this year, has one message: Go vote.

99 and headed to the polls. #LoyolaVotes2018#WhyIVotepic.twitter.com/140czi4Whr

If you're dead you can't take advantage of good health insurance. I think it's appropriate to think of the millions of unborn babies being murdered every year. In 2016 more babies were aborted than were born in Harlem. Have you no fear of God ? Are you sure you're not committing the deadliest sin? First things first. I envisioned our chopped up children when I voted.

How very short sighted and Protestant of you. The first thing any Catholic should envision is the extreme damage and billions of deaths that GOP policies will cause. The garment of life isn't limited simply to abortion, nor is voting (or should it be) a one-issue pony.

Pablum! All the Catholic and American values in the World will not afford us the certainty of making a "correct" decision when we vote. We take what we know, better said, "what we think we know" and apply it to the political situation as we find it. It defies rationality that columns of impoverished Centroamericanos can be allowed entry to the US without doing serious harm to many of our citizens. Go and minister to your flock wherever they are, Jesuit, and do not ask them to come here.

Sister needs to read both sections of #2241
Catechism of the Catholic Church, paragraph 2241: The more prosperous nations are obliged, to the extent they are able, to welcome the foreigner in search of the security and the means of livelihood which he cannot find in his country of origin. Public authorities should see to it that the natural right is respected that places a guest under the protection of those who receive him.

Political authorities, for the sake of the common good for which they are responsible, may make the exercise of the right to immigrate subject to various juridical conditions, especially with regard to the immigrants’ duties toward their country of adoption. Immigrants are obliged to respect with gratitude the material and spiritual heritage of the country that receives them, to obey its laws and to assist in carrying civic burdens

As a former long-time Democrat of more than 25 of my 56 years, I'm a pro-life moderate Republican who often disagrees with typical Republican party policies. I agree with Sister Schmitz that care for "people on the fringes of society" is of paramount importance to God, the Author of life. There are surely many people on the fringes of society. However, I believe that restoring legal protection to unborn human beings is a matter of human rights and sparing their lives from the violence of legal abortion.

Unfortunately voting a pure "pro-life" (misnomer) ticket that's GOP-heavy is the opposite of pro-life and ignores the long term destructive policies of the GOP that will result in the deaths of billions.

Hi after reading your blog I have finally found some knowledge which
I was looking for so long for that reason Thanks.