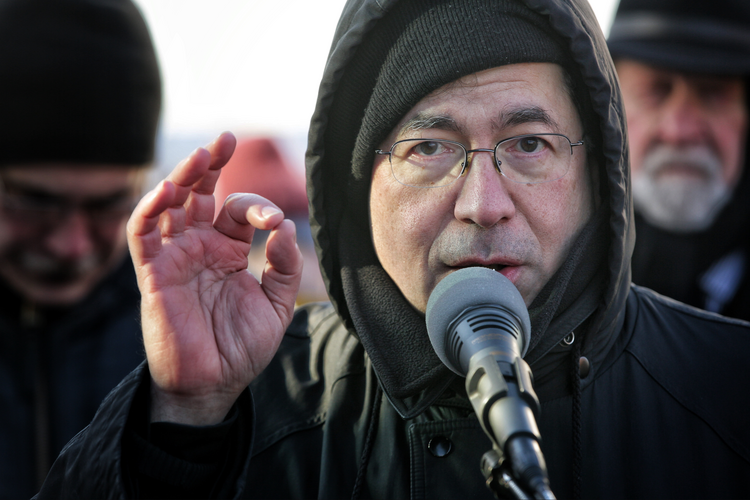 Father Frank Pavone, national director of Priests for Life, speaks during a prayer and protest rally outside of the new Planned Parenthood building in Washington Jan. 21, the day before the annual March for Life. (CNS photo/Lisa Johnston, St. Louis Review)

A Catholic priest who posted a video to Facebook and YouTube featuring the remains of an aborted fetus with a message urging voters to support Donald J. Trump and other Republicans is standing by his actions even as other pro-life Catholics condemn the act and ask if it violated church law.

Father Frank Pavone, national director of Priests for Life and a member of Mr. Trump’s Catholic advisory council, told America on Nov. 8 that the video was part of a pre-election novena, or nine day prayer, aimed at convincing voters “to vote pro-life, essentially meaning, to vote for Trump and for the Republican ticket.”

But an official with the Archdiocese of New York, where the video was filmed, called it “absolutely appalling” and said the post “deserves to be repudiated by all of us who consider ourselves to be pro-life in the fullest meaning of that word.”

On Monday, Father Pavone, who is based in New York but who is a priest of the Diocese of Amarillo, Tex., posted on Facebook Live and YouTube a video depicting him preaching over an altar on which sat “a child who was killed by abortion,” according to a screenshot of the post.

In the video Father Pavone, standing behind the altar, argues that the Nov. 8 election election will decide “if we allow this child killing to continue in America or not.” He goes on to say that Mr. Trump “says, ‘No, the child should be protected.’”

Father Pavone has previously endorsed Mr. Trump and also serves on the candidate’s pro-life advisory committee. Father Pavone said he captured the video in Priests for Life’s New York offices in a room where he occasionally celebrates Mass.

In the evening of Nov. 8, Amarillo Bishop Patrick J. Zurek issued a statement in response to Father Pavone's post, noting that the Diocese of Amarillo "deeply regrets the offense and outrage caused by the video for the faithful and the community at large." Bishop Zurek said the diocese was beginning an investigation into the incident, but pointed out "Priests for Life, Inc., is not a Catholic institution, but a civil organization, and it is not under the control or supervision of the Diocese of Amarillo."

He called the display "of the body of an aborted fetus...against the dignity of human life and...a desecration of the altar." The bishop said, "The action and presentation of Father Pavone in this video is not consistent with the beliefs of the Catholic Church." Bishop Zurel said, "We believe that no one who is pro-life can exploit a human body for any reason, especially the body of a fetus."

Father Pavone said he had received the human remains from a Protestant minister who had acquired it from a pathologist. He said that he celebrated a funeral Mass for the body before burying it. According to Father Pavone, burying fetal remains has become part of his anti-abortion ministry. He added that some bishops have participated in those services.

For years, the pro-life movement has debated the merits of using graphic images in explaining its opposition to abortion. Father Pavone said his video was akin to showing images of Nazi Holocaust victims.

But Abby Johnson, a former Planned Parenthood director and pro-life author, called Pavone’s actions a “clear exploitation” to get votes for a candidate.

“It is horrendous to think that a Catholic altar, a holy altar, would be desecrated for any reason, particularly politics,” Ms. Johnson said.

Ed Mechmann, the Archdiocese of New York’s director of public policy who has written against abortion in the past, condemned the video in a blog post published on the archdiocese’s website.

“A human being has been sacrificed and the altar of God has been desecrated, all for politics,” Mr. Mechmann wrote. “Everyone who respects the dignity of every human person should reject and disavow this atrocity.”

Michael Khan, president of Right to Life at Georgetown University, said Father Pavone’s actions treat neither unborn life, nor the pro-life movement with the respect it deserves.

“The goal of our movement is to advance an inclusive message,” Mr. Khan said. “The actions of Father Pavone only seem to alienate more people from our movement, including millions of pro-lifers who themselves were uncomfortable with Donald Trump’s candidacy.

Pamela Suresca, director of the campus mentor program for Students for Life of Illinois, also distanced Father Pavone’s actions from those of the pro-life movement.

“This is not how we change hearts and minds,” she said. “We’re better than that as a church and pro-life movement. We should never be pushed to that extreme.”

“I'm disgusted by what Father Pavone did. Not only because it violates Canon Law (1239), but because it objectifies a defenseless child. Our Catechism is very clear that human beings are not to be used as a means to an end. And just because Father Pavone has the noble goal of wanting to end abortion does not mean he gets to have carte blanche to do whatever he feels like in service of that goal. Breaking Canon Law and objectifying human beings is intrinsically wrong.”

Father Pavone said his critics were guilty of “seriously misguided thinking.” He does not anticipate being disciplined because of the video.

“The problem about the dignity of human life is with those who killed this child, those who permit it under the law and those who, again, like [Democratic candidate Hillary] Clinton, want it to continue,” he said. “They’re the ones who have a problem respecting human life, not those of us who show the results of [abortion].”

Father Pavone has clashed with some bishops over his management of Priests for Life, which reportedly has one of the largest budgets among Catholic pro-life groups.

Cardinal Timothy Dolan of New York, tasked by church authorities to help reorganize Priests for Life, wrote in a 2014 letter to U.S. bishops that the organization had refused to undergo a financial audit or restructure its board. As a result, he wrote, “I am unable to fulfill [the Vatican’s] mandate and want nothing further to do with the organization."

Earlier, in 2011, Bishop Patrick Zurek of Amarillo took issue with Father Pavone’s “incorrigible defiance of my legitimate authority as his bishop,” according to the Religion News Service. Father Pavone had moved to Amarillo in 2008 because of a sour relationship with the late Cardinal Edward Egan of New York.

Catholic voters have been split in the months leading up to the election, but as the race closes today they appear to be gravitating toward Mrs. Clinton.

@MikeOLoughlin
Show Comments (
3
)
Comments are automatically closed two weeks after an article's initial publication. See our comments policy for more.
William Rydberg
4 years 3 months ago
I listened to the youtube in its entirety. Its about 50 minutes. Certainly isn't boring....Wow! in Christ,
Crystal Watson
4 years 3 months ago
All this kind of thing does is confirm beliefs that pro-life people are religious nuts.
Carlos Orozco
4 years 3 months ago
Now, now. It's not like us pro-lifers are into "spirit cooking".