What you don’t know about Loyola’s Sister Jean 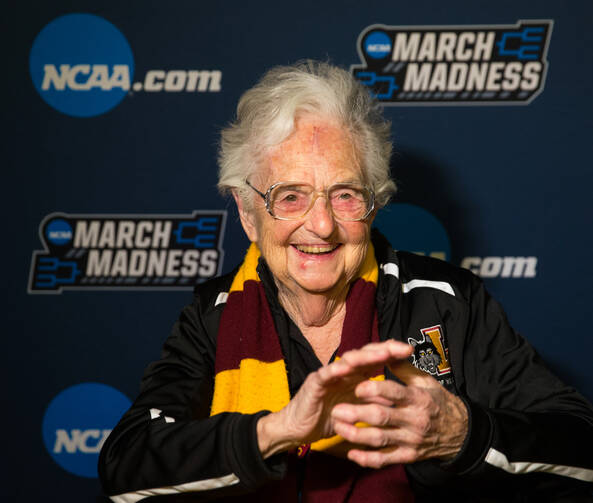 Sister Jean Dolores Schmidt needs no introduction. You have seen her praying for the Rambler team that is enjoying a Cinderella run to the Sweet 16 in the N.C.A.A. men’s basketball tournament. You have likely seen the profiles, the gifs, the memes, the television spots. But there is much that you have not seen.

Before Sister Jean became a national (or should I say, international?) sensation, she was Royalty of Rogers Park, Chicago.

I met Sister Jean when I arrived on the campus of Loyola University Chicago in 2011. A friend of mine invited me to her apartment—located in a dorm, where she could more easily minister to students—for a weekly prayer group. It was an intimate gathering where we lit candles and reflected on the upcoming Sunday’s Gospel. Sister Jean would patiently listen to our thoughts on the Gospel and then set out cookies while we vented our midterm stresses and shared our excitement about new friendships and internships.

My heart is full after reading about Sister Jean of @LoyolaChicago this morning.

She is, of course such a huge supporter of the @RamblersMBB team, but you may not know how much MORE Sister Jean does around Loyola and Chicago. https://t.co/o8g6MWTwMN

Later, I saw Sister Jean working all over campus. She would take the 147 bus downtown to her office, where she would pass out copies of the student newspaper to students waiting for the shuttle back to the uptown campus. Sister Jean was the chaplain for the men’s basketball team but also for a freshman dorm and the entire downtown campus.

Being a formal chaplain for multiple student organizations and an informal chaplain to countless other individual students would be enough work to fill several full-time ministry positions, let alone a retirement gig. But Sister Jean also worked part-time at a doctor’s office as an administrative assistant. You can imagine my surprise when Sister Jean asked me to participate in another program she founded and ran that connected students with their elderly neighbors, calling it “SMILE, Students Moving Into the Lives of the Elderly.”

When I was a student at LU I was going through a rough time. Someone told Sister Jean and for 3 months we would meet once a week and just talk about life and the basketball team. That act of kindness was indescribably important to me.

Sister Jean is a celebrity of the highest degree around campus. She attends everything: orientations, games, plays, rallies, vigils, meetings and Mass. She does all of this—well into her 90s—with the joy of the Gospel. And though a recent hospitalization has placed her in a wheelchair for now, she had been as ambulatory as the athletes she ministers to.

Not to mention—she's a celebrity of the highest degree on campus. She's at EVERYTHING. Orientations, games, plays, rallies, vigils, meetings and Mass (everyday at 7:30am in the Jesuit residence).

It is easy to see why Sister Jean has captured the hearts of millions. Her joy and holiness radiate through TV’s, radios and Twitter feeds. But there is another reason: We miss nuns.

In 1966, there were 181,421 women religious in the United States. Today, there are 47,170 (and only 9 percent are younger than 60). While many Americans grew up under the influence of religious sisters, with so few remaining, they have faded from being regular parts of our lives to residing in our nostalgic memories. Sister Jean reminds us of the work that women religious have always done without any fanfare or morning talk show spots.

Serving as chaplain to the Rambler basketball team is not Sister Jean’s first foray into athletics. According to a profile written in Loyola’s student paper, she was a coach for basketball, volleyball and yo-yo teams in elementary schools in Chicago, Los Angeles and North Hollywood: “In what Sister Jean calls the ‘olden days’, nuns weren’t allowed to go out after dark. When they had night games, Sister Jean’s teams would call the convent at halftime, tell her the score and ask her to pray for them.”

In our youth-obsessed culture, in which people Sister Jean's age are at best invisible and worst condescended to, it's a blessing to see publicity for such a wonderful role model for the aging.
Age is a number, not an identifier--especially for the Holy Spirit!