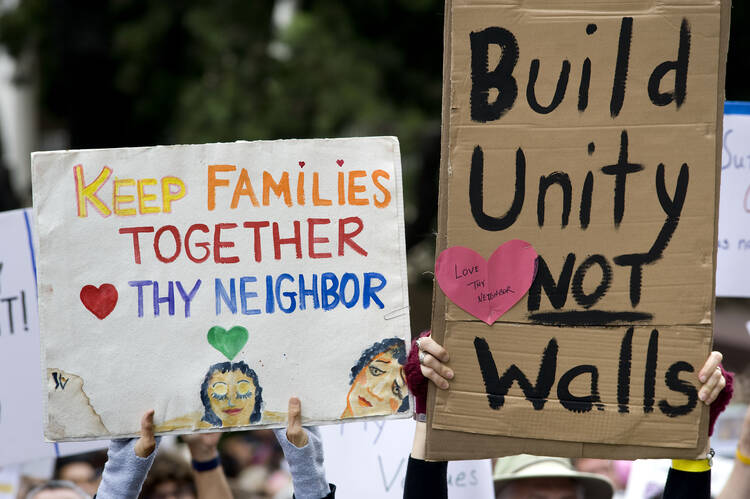 A march in downtown San Diego on June 23 protests the separation of families detained at the U.S.-Mexico border. (CNS photo/David Maung)

The U.S. government should stop separating children from their parents and formally rescind its “zero tolerance” immigration enforcement policy, according to a new report from Lutheran Immigration Refugee Service and the U.S. Conference of Catholic Bishops’ Office of Migration and Refugee Services.

Immigration officials separated more than 2,500 children from their parents since the Trump administration announced a zero-tolerance enforcement policy in May. While most have been reunited, more than 200 children remain separated. After public outcry, President Trump signed an executive order halting the policy of separating children.

“As we have been for decades, communities of faith were there, poised and ready, to love and serve our neighbors in need,” Kay Bellor, vice president of programs for L.I.R.S., said in a statement. “It is our deep hope that the lessons learned from this time in our history will prevent the cruel separation of children from their parents from happening again.”

The joint report details how Lutheran and Catholic agencies this summer helped the Trump administration reunite more than 1,200 families that had been separated. The experience informed the joint recommendations, which center on family unity.

Rescinding the zero-tolerance policy “would restore federal prosecutors’ ability to utilize their discretion and balance various factors,” according to the report.

Some of the recommendations from the nation’s Lutheran and Catholic communities include the creation of an official “family unity” ombudsman to lead coordination of the remaining family reunifications and monitor future incidences of family separation. The report recommends that families should not be delivered to service providers or reception centers outside of agreed-upon business hours since “reuniting families during the night can increase their stress and add to children’s confusion.”

Rescinding the zero-tolerance policy “would restore federal prosecutors’ ability to utilize their discretion and balance various factors,” according to the report. It calls on Congress to invest in alternatives to detention, expand programs that address the root causes of migration, and oversee detention and ongoing reunification efforts.

Other recommendations include better documentation of family relationships and improving training for care providers. The agencies urged government support for the separated families even after reunification.

“Little is yet known about the extent of the traumatic impact of the recent forcible separation of children from their parents at the border,” according to the report, which noted that local service providers had recorded symptoms of trauma, including anxiety. Unlike unaccompanied minors, it said, “These children arrived in the U.S. believing they would continue to remain under their parents’ care, which made their forced separation even more jarring.”

While recommitting to help, L.I.R.S. and the U.S. bishops called on the Trump administration to “commit to immigration policies that are humane and uphold each individual’s human dignity.”

Our southern border needs to be closed off. We have no control over the people and diseases coming to our nation. We are putting our people at risk. Agreed-it's a major bummer to be separated from your kids. Therefore parents in Latin America who dare cross our border illegally and who have committed a crime need to leave their kids behind in their country of origin to be with relatives they can trust cause these parents-if they are lawbreakers, need to be ready to face jailtime. Illegal border crossing can also be very dangerous. Do we really think it is morally responsible to risk childrens lives by trying to cross the Southern Border? It is very irresponsible to cross illegally. Keeping the family together for those dead set on crossing the border is thus unthinkable. Send them back. And what about the felon dad or felonious mom? They go to jail. If I am an astute steet smart criminal I will cross with a mother and her kids and claim that I'm the dad so they will go easy on me. Let's put a stop to this con game. Time to hold countries accountable allowing shameless immigrant caravans to be recruited and that use their government resources to aid and abet this scam. Also while I am at it. I call out AMERICA and its traitorous assistance to the DEMOCRAT party for not doing more to demand that immigrants vote Republican as innocent human life is way more important than economic issues. The consistent life ethic can't let unborn children get the shaft as we foolishly try to balance their sacred right to life with poverty issues or something like LBGTQ special protections. Our poor and other Americans come first. The people of Guatemala or Mexico or Honduras are not the priority of our government- Americans are. The Church must help the poor but must also educate the poor to vote for unborn life and stop punishing prolife politicians who oppose open borders and support immigration law.
We have a right to require our laws to be obeyed. Bishops in the Western Hemisphere should urge governments to have an immigration escape valve but should also confront the poor not to trade their alleged family values for a plate of food at the expense of the unborn and traditional marriage in foreign lands like the US.
And I have another topic-Let's face it. Too many Jesuits defy Church authority and the Catechism. Many Jesuits are active homosexuals who are traitors to the Church and some could be so morally challenged to even bring other gays into the Jesuits! I guess the feel good wave of being pro immigration assuages consciences that are so twisted as to defy basic Church sexual morality. Alas we have to think of our final judgement and our responsibility to defend our values. A vigorous defense of the prolife (even if at times tepid) GOP must happen from the pulpits. DEMOCRAT SCOUNDRELS CAN POUND SAND. The Democrats hate to think of Catholics who live their faith. It's high time to spurn the dirty and morally corrupt DEMOCRAT party and stop encouraging immigration anarchy.
DO YOUR JOB AMERICA and the Society of Jesus.

I know that Jesus has no problem with Jesuits...He loves them all the same no conditions and that goes for the people they serve