Al Smith Dinner 2018: a night of light and dark moments 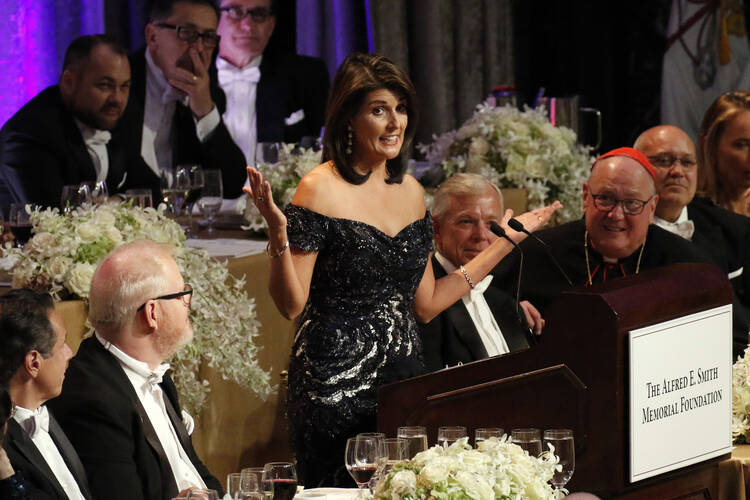 Seated at gold-clothed tables in the grand ballroom of the New York Hilton Midtown hotel, guests at the 73rd Alfred E. Smith Memorial Foundation Dinner looked on as Ambassador Nikki R. Haley, the U.S. permanent representative to the United Nations, roasted her contemporaries and her boss.

Organized by the Archdiocese of New York, the annual charity event assembles well-known figures in politics, business and culture to raise money for the city’s poor children.

In 2017, the keynote speaker was Paul Ryan, “who’s a boy scout,” said Ms. Haley. “And that’s fine...a little boring. So this year you wanted to spice things up again, right? I get it—you wanted an Indian woman, but Elizabeth Warren failed her DNA test,” she joked, alluding to her own Indian parentage and Senator Warren’s widely criticized claims to Native American heritage.

Ms. Haley said that “the president called me this morning and gave me some really good advice” about her speech. “He said if I get stuck for laughs, just brag about his accomplishments. It really killed at the U.N., I’ve got to tell you.” In September, at the United Nations General Assembly, President Trump drew derisive laughter when he said his White House has accomplished “more than almost any administration in the history of our country.”

The dinner marked Ms. Haley’s first high-profile public appearance since she announced her resignation last week in the Oval Office. As the keynote speaker, she joined a veritable galaxy of luminaries who have spoken at the fundraiser in years past, slinging zingers and making headlines. The list boasts 11 of the last 12 U.S. presidents; presidential candidates like Hillary Rodham Clinton, Mitt Romney and Al Gore; and foreign leaders like Sir Winston S. Churchill and Tony Blair.

This year, the comedian Jim Gaffigan served as master of ceremonies. In addition to skewering politicians, the speakers looked back at a difficult year for the church, which has included revelations of sex abuse and its cover up. Mr. Gaffigan said that 1928, when Mr. Smith mounted his historic bid for the presidency, was a tough time to be a Catholic—just like 2018. During his invocation, Cardinal Timothy M. Dolan addressed the “tragic way some of [the church’s] leaders have wounded the vulnerable.”

The night—at times weighed down by such sobering reminders—was overlaid with levity. Mr. Gaffigan surveyed the room during his introduction and deemed it “a place for rich Catholics and Jews to dress like rich Protestants.”

Mr. Gaffigan surveyed the room during his introduction and deemed it “a place for rich Catholics and Jews to dress like rich Protestants.”

“What a distinguished group of rich, super-rich and Michael Bloomberg,” Mr. Gaffigan said. “I never thought I could get whiter…. I’m wearing a white bow tie and tails.”

“I don’t know if it’s pronounced dais,” he said with reference to the platform the guests of honor sat on, “or look at us, we’re more important than you.”

The dais featured several long, blocky, yellowish tables that looked like bales of Iowan hay, especially against the giant, rumpled American flag that hung behind them. Politicians and businesspeople abounded. Mayor Bill de Blasio and Governor Andrew Cuomo, one seat away from each other, appeared to avoid making eye contact. (The two have feuded throughout Mr. de Blasio’s tenure as mayor of New York City.) Mr. Bloomberg made conversation with the chief executive of Bank of America. Former secretary of state Henry Kissinger chatted with John A. Catsimatidis, Jr., the son of a billionaire grocery-store magnate. Cindy McCain, whose husband, Senator John S. McCain, passed away in August, was not seated on the dais but earned a standing ovation.

Mr. Gaffigan reserved some biting commentary for Ms. Haley. “I personally have been a huge fan of Nikki Haley ever since she resigned,” he said, then hinted at her and Mr. Bloomberg’s political ambitions.

The man behind the dinner: Alfred E. Smith
Joseph McAuley

“If Nikki Haley was running for president, she would be speaking at fundraiser events in front of special-interest groups like Catholics,” said Mr. Gaffigan. “If she was running, she would have resigned before the midterms, and before Mueller dropped his indictment bomb.

“Mayor Bloomberg is not running for president either…. If he were, he would’ve changed his political party.” Mr. Bloomberg recently re-registered as a Democrat.

When it finally came time for Ms. Haley’s roast, Mr. Gaffigan deadpanned, “It is my pleasure to introduce the next president of the United States, Nikki Haley.”

Ms. Haley called out Washington politicians (“Jeff Flake was gonna be here, but he wanted to give the F.B.I. a week to look into it”) and joked about the Russia probe and its various appendages.

When she started her job, she “learned that the U.N. has 193 member nations,” she said, but “with all of our differences, there is still something that unites all 193 countries: at one point, every single one of them was paying Paul Manafort.” Mr. Manafort, Mr. Trump’s former campaign chairman, was convicted of eight charges related to tax and bank fraud in federal court this August.

Turning her attention to Halloween, Ms. Haley said, “Michael Cohen asked how much candy he’d get in exchange for immunity.”

“Just about everywhere I’ve been on humanitarian missions,” Ms. Haley continued, “I come across the church doing incredible work that lifts up millions of desperate people. It is serving God’s will.”

She also took aim at New York City and Mr. de Blasio. “People always wonder if I felt different or isolated as an Indian-American growing up in rural South Carolina,” she said. “Actually, there was a benefit: It totally prepared me for being a Republican in New York.”

And later: “Oh, look, I got the mayor’s drink by mistake. No ice.” Mr. de Blasio has called for the abolition of U.S. Immigration and Customs Enforcement, or I.C.E.

Ms. Haley concluded with a grateful acknowledgement of the church’s work around the world. “It would be tragic to allow the abuse scandal to blind anyone to the amazing good works the Catholic Church does every single day,” she said. “I’ve been to the border between Colombia and Venezuela, where people walk three hours each way in the blazing sun to get the only meal that they will have that day. Who’s giving them that meal? The Catholic Church.”

“Just about everywhere I’ve been on humanitarian missions,” she continued, “I come across the church doing incredible work that lifts up millions of desperate people. It is serving God’s will. There are real problems, yes, but we must not lose sight of the miracles that are performed every day.”