Review: The feuding fathers of the Democratic Party 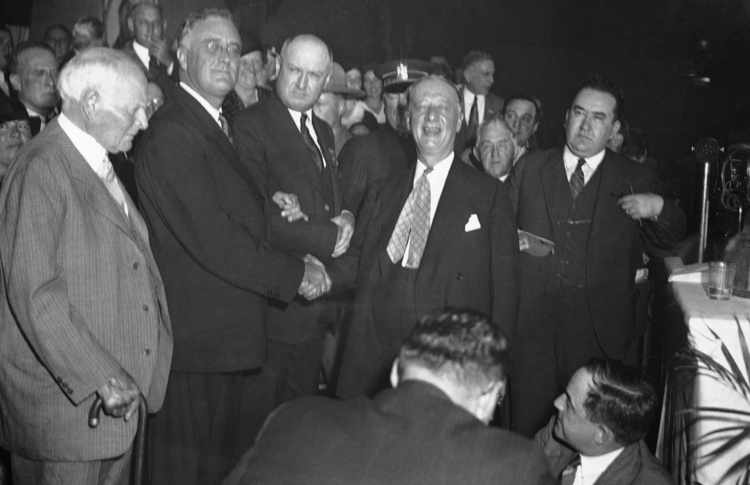 After a fierce battle for the presidential nomination in June 1932, Al Smith shakes hands with Gov. Franklin D. Roosevelt at the state Democratic convention in Albany, N.Y., Oct. 4, 1932. (AP photo)

One of my first introductions to politics and the divisions that it can create within tribes and families came to me as a boy when my great-aunt informed me that she was no fan of Franklin Delano Roosevelt. How could this be, I wondered? I had been taught that F.D.R. was a secular saint who had saved the United States from economic collapse and led the Allies to victory in World War II. And we were a historically Democratic New York family.

But political beliefs have deep roots. My aunt had family connections to Alfred E. Smith—her father was one of his lawyers, and she was one of his godchildren—and Smith, the former Democratic governor of New York and onetime presidential candidate, had somehow been betrayed by Roosevelt. Or so my aunt led me to believe.

How and why divisions like these developed is the subject of an elegant new study from Terry Golway, a senior editor at Politico and a former columnist for America. Golway, who has been studying these two men for decades, somehow finds a way to offer a new glimpse at both. Roosevelt, a 20th-century titan, is seen here as a politician still finding his voice. And Smith, perhaps now known more for the bitterness that engulfed him after his 1928 presidential loss, re-emerges here as the Happy Warrior waging battles on behalf of the working class.

Both sons of New York, Alfred E. Smith and Franklin Roosevelt were close political allies. Until the national Democratic convention of 1932.

Frank and Al reminds us that fortune is a fickle friend. As a young politician, Al Smith saw his career take flight with the help of the Tammany Hall politicos who ruled New York City. A son of the Lower East Side who famously never finished grade school, he was elected to the State Assembly in 1903 and became the majority leader only eight years later. The horrific Triangle Shirtwaist Factory Fire of 1911 gave him and his friend Robert Wagner, another rising New York legislator, the opportunity to push through a raft of reforms aimed at improving the plight of workers. By 1919 Smith was governor.

Roosevelt, meanwhile, had a shaky start in politics, with a short and unremarkable stint in Albany and a failed run for the U.S. Senate in 1914. When he contracted polio in 1921, it seemed that his political career was over.

But we all know how this story ends. Smith suffered a loss of historic proportions to Herbert Hoover in the 1928 presidential election, a defeat fueled in no small part by anti-Catholic animus. Meanwhile, F.D.R. won the governorship of New York and would never lose another election—though in a plot development worthy of the Bard, Smith would oppose F.D.R. for the Democratic presidential nomination in 1932.

Roosevelt and Smith first met in Albany in 1911, when F.D.R. was a freshman legislator. Smith stopped by Roosevelt’s residence with Wagner to introduce himself and inquire about a bill whose passage the new state senator from the Hudson Valley was (rather impudently) holding up. In a sign of the economic circumstances that separated them, Smith was greeted by Roosevelt’s butler.

Roosevelt had connections in the Protestant establishment that Smith, in all his Irish Catholic glory, decidedly did not.

Over time, it became clear that the two men needed each other. Roosevelt had connections in the Protestant establishment that Smith, in all his Irish Catholic glory, decidedly did not. When Smith wondered why Roosevelt needed to introduce him at the 1928 convention, an aide explained: “Because you’re a Bowery mick and he’s a Protestant patrician and he’d take some of the curse off you.”

Meanwhile, at key moments in his political life, especially after Roosevelt contracted polio, Smith offered him a lifeline: the chance to introduce him at the Democratic Party convention in 1924, and then the opportunity to run for governor in 1928. Roosevelt would not have run, and probably would not have won, without Smith’s goading and support.

For Terry Golway, the modern Democratic Party has two fathers.

What interests Golway most is the partnership these men forged between the “patrician progressives” and the “pragmatic politicians,” between the sons of Tammany Hall and the gentry of Hyde Park. This coalition eventually propelled the Democrats to a landslide victory in 1932 and gave birth to a national movement. For Golway, the modern Democratic Party has two fathers.

The author is obviously fond of both men, but he sees their faults too. He commends Roosevelt for being “admirably gracious” toward Smith in his latter years, especially when the mentor turned on his disciple. Smith questioned the “alphabet soup” of agencies instituted by Roosevelt’s New Deal and joined with business leaders in 1934 to form the American Liberty League to work against these reforms.

But Golway also recognizes that in the process of his own political myth-making, Roosevelt did not give Smith full credit for the series of reforms he pushed through in Albany and that would later come to shape the New Deal. They included a 48-hour workweek, prison and school reforms, and child welfare laws.

Why one of these men is still revered and written about today, while the other seems to have faded into the mists of time?

An interesting question raised by this book is why one of these men is still revered and written about today, while the other seems to have faded into the mists of time. The enduring fascination with World War II explains part of Roosevelt’s appeal, but there is more to it than that. In the very way he looked and sounded, with his brown derbys and ubiquitous cigars, Smith seems like a character out of the 19th century. Roosevelt, meanwhile, despite his physical limitations, emerges as a vibrant leader for the new century, hopeful and defiant.

This is not entirely fair to Smith, who in Golway’s telling emerges as much more than a machine politician. In his heyday in Albany, he was a master speaker who was also smart enough to plow through the state appropriations bill in all its excruciating detail. He had an eye for talent, and helped guide the careers of, among others, Robert Moses, the political organizer Belle Moskowitz and Frances Perkins, who would become the first woman to serve in a presidential cabinet. Indeed, many of Smith’s acolytes went on to work in the Roosevelt administration.

But if Roosevelt emerges as a figure of hope, Smith seems by the end of his life to have become one of despair, “an embittered misanthrope,” in the words of one journalist.

The man behind the dinner: Alfred E. Smith
Joseph McAuley

Why did Smith turn on Roosevelt? Early in his career, Smith saw Roosevelt as an amateur politician—which perhaps he was. But Smith never fully grasped the transformation that Roosevelt went through in the years after he contracted polio. Later, Smith would “turn incandescent with rage” when Roosevelt invoked “the forgotten man” in one of his early presidential speeches. For Smith, Roosevelt had no right to talk about the poor and the forgotten—these were Smith’s people, and he was their spokesman. The student had eclipsed the teacher, and the teacher would never forgive him for it.

Smith himself never gave an explanation for the split. Some suggested the money changed him. Golway drolly remarks that after leaving politics, Smith traded in his brown derby for silk-lined hats. That may be true, but it is worth remembering that Smith always had much more to lose than Roosevelt. Smith actually lost money in the stock market crash of 1929, whereas the Roosevelt fortune, one presumes, was always secure. The fact that Smith may have become protective of his own status and wealth as he grew older is a different kind of American story, but an American story nonetheless.

This article also appeared in print, under the headline “The feuding fathers of the Democratic Party,” in the October 29, 2018, issue.