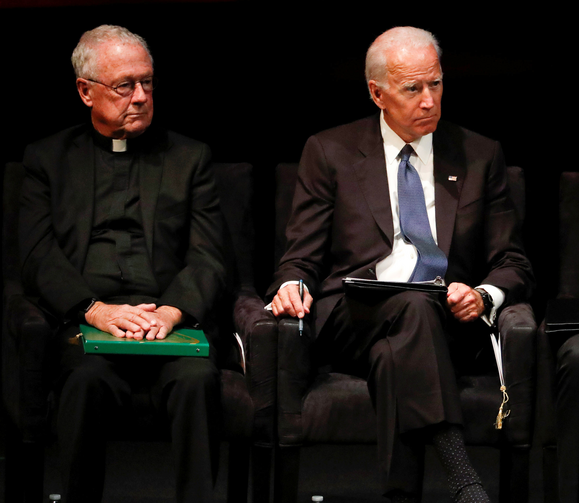 John McCain’s epitaph ought to be “The just man justices,” from Gerard Manley Hopkins’s poem “As Kingfishers Catch Fire,” said Father Edward Reese, a Jesuit who knew the late senator for over 20 years.

Father Reese spoke at the memorial services for Mr. McCain in Phoenix, on Aug. 29 and 30, and he has been invited to speak again in Washington, D.C., as Mr. McCain’s funeral services conclude this week. The ceremony on Aug. 29 began with a private gathering of family, but over 7,500 people later came to pay their respects during a public farewell at the Arizona Capitol.

Father Reese, the former president of Brophy College Preparatory school in Phoenix, told America that he believes Senator McCain would want to leave his fellow Americans with a request for civility and respect in the nation’s political life. Mr. McCain had often stressed in conversations with him how important it was to get to know people you disagreed with, to be able to argue on the Senate floor but still sit together at their kid’s basketball game.

“Anyone that was a guest in his home he took seriously, he respected, and he was willing to talk about differences of opinion,” said Father Reese.

“Anyone that was a guest in his home he took seriously, he respected, and he was willing to talk about differences of opinion,” said Father Reese.

Mr. McCain’s sons, Jack and Jimmy, attended Brophy Prep. Father Reese is now president of St. Ignatius College Preparatory in San Francisco. He is also the brother of Thomas Reese, S.J., editor in chief of America from 1998 to 2005.

Father Reese was sitting on a friend’s porch in Arizona when he first met the senator’s wife, Cindy McCain. After the McCains’ dog jumped up on the porch, Cindy came running up to retrieve it, then invited them all for dinner.

“My relationship with both the senator and Cindy was as a friend who spent weekends, Fourth of Julys, things like that with him,” said Father Reese. He said his relationship to the McCain family was “very personal” and “in a relaxed setting.”

While their relationship was personal, Father Reese was naturally aware of Mr. McCain’s political life. He offered the invocation before Mr. McCain’s 2008 presidential nomination at the Republican National Convention. Father Reese said he was asked to say the prayer and was able to proceed with no intervention from the McCain campaign.

“No one ever asked to see my prayer,” he said. “There was none of that sort of thing…. He was very much that way.”

On Aug. 30 a service for Mr. McCain was held at North Phoenix Baptist Church before he was flown to Washington, where he will lie in state at the United States Capitol. Senator McCain will be buried in the U.S. Naval Academy’s cemetery in Annapolis, Md., on Sunday, Sept. 2.

Although Mr. McCain was raised Episcopalian and later attended a Baptist Church, Father Reese said there was a distinctly Jesuit aspect to the senator’s faith. “John McCain found his God in all things, especially up there in the northern part of Arizona.”

In the land surrounding his home, Mr. McCain planted trees that were native to attract the birds. He was a conservationist with a love for animals. “I think he knew every bird by name,” said Father Reese. He affectionately recalled how Mr. McCain worried over a familiar hawk when it was not around.

When Father Reese visited the senator shortly after his diagnosis of brain cancer, Mr. McCain insisted on taking him and several other friends to a nearby creek to show them an irrigation system he had created.

Father Reese said that, while Mr. McCain was easy enough for many in the political sphere to disagree with because he was so straightforward, some may have missed what a loving family man he was. “He made every effort he could to come back to Arizona to spend weekends with his family,” said Father Reese. “He’d tease his boys; he’d tease his daughters, but in a loving kind of way.”

At home Mr. McCain was rarely seen in his Washington power suits but instead wore old blue jeans and sweatshirts with “a funny little hat on.” The world knew him as a senator, but at home he was “King of the Barbeque.”

Father Reese’s favorite memories of the senator center around Christmas-time visits. The senator directed a massive luminary operation around his property, enlisting friends and family to fill little bags with sand and light a candle in each one.

“I’m talking about miles of these things,” Father Reese said. “He was the general in charge…. He would march us...a forced march in the desert up to the top of the hill, so we could look down and see all these candles lit.

“That’s what I mean about finding God,” Father Reese said. “He saw God in the beauty of that place and knowing that we lit all those candles.”

Emma Winters is a Joseph A. O’Hare Fellow at America.

If there is an afterlife, and if there is a judgment, I would hope that the many thousands of innocents, who went before their time to heaven because of the barbarity of this war criminal, will be the ones who will make the final decision of what corner of hell McCain will spend eternity.

Mr. McCain was sufficiently simple for some in the political circle to differ with on the grounds that he was so direct, Animated Video Company some may have missed what a cherishing family man he was. The representative coordinated a huge illuminating presence activity around his property, enrolling loved ones to fill little sacks with sand and light a flame in every one.