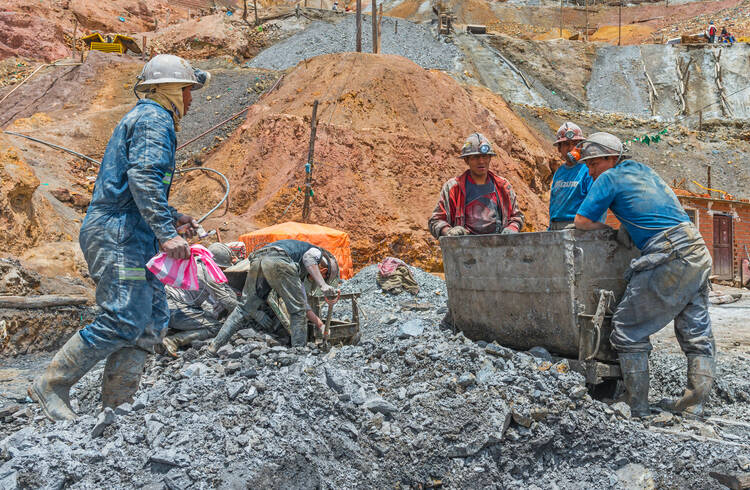 A silver mine of Potosi, Bolivia. iStock photo.

“In the end, the mining companies have won over the government, who lets them do whatever they want and gives concessions to everyone. So, I am calling on Canadians to react, to write to the government so that there is justice and respect for the environment.”

Bishop Guy Charbonneau, who presides over Choluteca, Honduras, made that call in 2013. A Canadian and a member of the Quebec Foreign Missions Society, like all three preceding bishops in Choluteca, Bishop Charbonneau issued this plea to his home country during a campaign on mining industries from Development and Peace, the official international development organization of the Catholic Church in Canada.

Canadians answered in force. In 2014, Development and Peace delivered 80,000 cards addressed to members of parliament in Ottawa, the nation’s capital, asking them to create an ombudsperson for extractive industries in Canada. On Jan. 17, after years of petitions, letters and protests, the Liberal government announced a plan to create a Canadian Ombudsperson for Responsible Enterprise, fulfilling a 2015 campaign promise to rein in Canada’s extractive industries.

The ombudsperson will be charged with overseeing mining, oil and gas and garment companies, with the potential to expand to cover all Canadian industries operating internationally. A news release from Global Affairs Canada, which manages the country’s international trade, says the ombudsperson’s office is mandated to investigate allegations of human rights abuses linked to Canadian corporate activity abroad. It will be empowered to independently investigate and report on mining impacts and recommend remedies for problems created by Canadian companies as well as and monitor their implementation.

“It’s a big victory for us,” says Elana Wright, advocacy officer at Development and Peace. Development and Peace first started hearing about the injustices of the Canadian mining industry from partners living in affected areas in the early 2000s and has been advocating for an ombudsperson for 10 years. The organization will have a seat on the newly created Advisory Body on Responsible Business Conduct, along with representatives from labor, civil society and the mining industry, which will advise the government and the ombudsperson on business conduct abroad.

“Many of our partners have been asking us for access to justice. They want something like an ombudsperson, a non-judicial mechanism acceptable to local communities so they can make a complaint relatively easily,” says Ms. Wright.

The ombudsperson is not Canada’s first attempt to establish an office to address its extractive industries. In 2009, responding to public pressure and reports of human rights abuses, the federal government, led then by the Conservatives, created a Corporate Social Responsibility Counsellor. That position was designed to mediate disputes between extractive companies and affected communities. Critics say the office lacked any real power, however, and the mediation was dependent on the voluntary participation of both sides.

The first counsellor, Marketa Evans, resigned four years into her post, without successfully mediating any of the six cases brought before her, due to noncooperation from the mining companies involved. The office was then vacant for 16 months (which still cost taxpayers $181,600 CAD between October 2013 and October 2014), until it was filled by Jeffrey Davidson, who has not handled a single case. The position will be dissolved in May.

Ms. Wright says the campaigns that touched on mining “brought the message home” for Canadians. “Many Canadians come from mining communities. Our economy is really based on natural resource extraction management. [Mining abuses] touched a nerve with our Canadian members when they heard Canada’s reputation is being stained by the activities of Canadian mining companies.”

Mining contributes billions to Canada’s G.D.P. each year and was the third largest contributor at the end of 2017, behind real estate and manufacturing. According to the Mining Association of Canada, a lobby that represents most of the largest mining companies in Canada, the industry directly employs over 370,000 people and indirectly employs nearly 200,000 across the country. In 2013, Development and Peace reported that over 75 percent of mining operations globally are registered in Canada, and over 60 percent of their projects are in Latin America.

In a statement, the Canadian Conference of Catholic Bishops praised the new ombudsperson office, noting the conference “has called attention to concerns and complaints involving Canadian-based and/or Canadian-registered companies which operate in other countries. These complaints in part have come from Catholic Bishops in Latin America, the Philippines and Africa, who shared their concerns and frustrations with the Bishops of Canada on a number of occasions, including at meetings of the C.C.C.B. Plenary Assembly.”

Last August, the C.C.C.B. sent a letter to Prime Minister Trudeau and other government officials condemning the abuses of Canadian mining companies and encouraging more regulation. Among the abuses the bishops mention are “threats, violence, extortion and even murder,” also noting that “control, extraction, processing and trade of these resources finance armed groups.” In the letter, Bishop Douglas Crosby, O.M.I., then the president of the C.C.C.B., named the need for an ombudsperson to address Canadian mining operations.

Regulating extractive industries is an international effort, and Ms. Wright says the Catholic community has embraced this problem across national boundaries. Groups like Coopération Internationale pour le Développement et la Solidarité, a network of Catholic development agencies in Europe and North America, have been working to listen to partners in the global south, like those in the Latin American network Iglesia y Mineria, which aims to strengthen popular movements, priests, bishops and laypeople.

“They want to do something about what they’re seeing in their parishes,” says Ms. Wright. “Their parishioners have lost their livelihood because of a mine in their area.”

In addition to human rights abuses abroad, mining watchdogs say the industry is also poorly regulated at home. Earlier this year, news broke that the Canadian government originated over $1 billion (CAD) in loans to a mining company, Turquoise Hill Resources, that avoided paying almost $700 million (CAD) in Canadian taxes by allegedly using shell companies. Turquoise Hill used the companies to finance a mining operation in Mongolia, Oyu Tolgoi, one of the world’s largest copper and gold mines. Mongolia’s own government has sent Turquoise Hill a bill of $155 million (USD) in taxes (which the company disputes). The Centre for Research on Multinational Corporations, a Dutch N.G.O., argues Mongolia is actually owed $230 million (USD).

Ms. Wright says Development and Peace now seeks not only redress for past injustices via the ombudsperson but also to prevent abuses from happening. She says Catholics should be proud of the role they played in pushing for the creation of the new office, noting that lay people, oblates, bishops and even Pope Francis have made mining a central international concern. “We’ve really had church leadership, and we’ve seen the power of church movements influencing change,” she says. “We see we do have a moral authority.”

When Canadian Catholics organize, she says, by letter writing, demonstrating and signing action cards, “it’s clear it has a big impact on parliamentarians.”