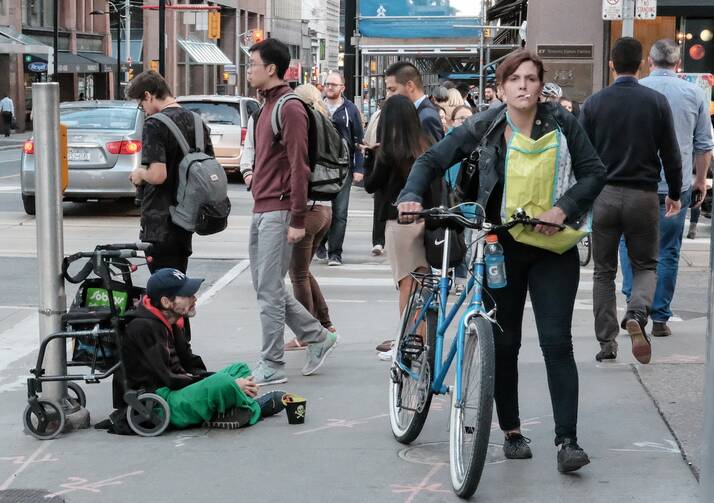 On Jan. 5, the temperature in Toronto set a record low at -23 degrees Celsius, or -9.4 Fahrenheit. Environment Canada advised those outside to cover up; at that temperature frostbite occurs within minutes. For most residents, that meant bundling up and staying indoors.

For people in Toronto who are experiencing homelessness, however, a population that has been growing, the cold is a far greater threat. One outdoor death of a homeless person was recorded in December. Over the course of a typical year, Toronto averages two deaths among its homeless community each week. In 2013, city acknowledged more than 5,200 homeless people; a new survey will be conducted this year.

With shelters packed to capacity, homeless advocates pressured the city of Toronto to open emergency spaces. In late December the city announced plans to open 400 shelter beds and six temporary respite centers, but activists and the homeless community said the problem required much more.

After the New Year, the city opened two more temporary warming centers and agreed to turn the Moss Park Armoury into a temporary shelter during cold weather. The city has also started renovating York Detention Center, a former youth jail, for the same purpose.

Cathy Crowe, a street nurse for 30 years and a professor at Ryerson University in Toronto, says the temporary shelters are saving lives and are being well-utilized. At the same time, she describes them as a minimal, short-term fix for a long-term problem. Since the new spaces do not meet the usual standards for permanent shelters, “it’s really hit or miss what you get. You learn through word of mouth what’s working and not working.”

Word of homeless people being turned away from shelters during the cold snap did reach Toronto’s ombudsman office, and an investigation into shelter space and access to it has been initiated.

With reliable information on new shelters, conditions and access hard to get from city officials, activists and members of Toronto’s homeless community have to rely on word-of-mouth to find out where to go to escape sometimes dangerous cold. Though the city provides public data on shelter use, it does not break the raw data down into conditions at specific shelters that might more accurately describe capacity level or report which amenities and services are available at specific locations.

The bundled data shows shelters consistently above 90 percent capacity, but that information does not help individual homeless understand how overcrowded individual shelters may be. Toronto officials have been criticized because of confusion their data is encouraging about just how much practical space is available and where.

“I talked to a couple friends living on the street that don’t usually access shelters but were so cold they felt the need to,” says Angie Hocking, director of outreach services at the Church of the Redeemer, an Anglican church in downtown Toronto that operates a drop-in program providing meals, nursing, counseling and other services for people on the street.

Her homeless friends were turned away from the shelter they sought out because workers there had determined it had reached its capacity limit. “When you know they went the extra mile to try to access shelter and were turned away, it’s heartbreaking.”

Word of homeless people being turned away from shelters during the cold snap did reach Toronto’s ombudsman office, and an investigation into shelter space and access to it has been initiated.

“The people most at risk are the ones that don’t have the knowledge of how to survive the cold, people recently on the streets, who don’t know where to go. I don’t know how they survive it.”

Exactly what shelter officials mean by capacity, too, is hard to parse. “People hear ‘93 percent capacity,’ and the thought is that that means there’s space,” says Ms. Hocking. “In my family’s 2-bedroom apartment, perhaps the capacity is 20 people, but only three of us can live there comfortably. It’s important to keep that capacity piece in perspective. What kind of dignity and respect are people feeling when they’re being crammed into a space?”

Even when some shelters do have space, people may not want to spend the night there because of past experiences or safety issues, Ms. Hocking says. “Issues around that space might be so detrimental that most of us would never send our child there, never go ourselves and would never want anyone we care about to go.”

“The people most at risk are the ones that don’t have the knowledge of how to survive the cold, people recently on the streets, who don’t know where to go. I don’t know how they survive it,” says Justin, the kitchen coordinator at the Church of the Redeemer drop-in program. Justin, who was homeless for several years before participating in the program, says knowing what places are safe and available only comes through experience and talking with others who have learned to navigate the system on the street.

Winter also creates a more volatile environment in shelters, says Justin. “People have wet boots and socks and things. In confined spaces, it gets to some people. Shelters are going to smell. You see it come out; it manifests as a little more anger throughout the course of the day in the winter.

“Even if you’re inside, there’s still that vibe that doesn’t want to go away,” says Justin, adding that seasonal depression, frustration and the stress of the holidays are harder to deal with while stuck indoors.

Though the winter offers unique challenges, Justin says that in the day-to-day life of homelessness the cold is just one more problem stacked on top of others. While winter temperatures bring attention to homelessness, he says, warmer weather allows residents who do have homes to ignore the problem.

Summer presents its own problems, of course, says Ms. Crowe, like access to cooling centers, since the conditions that lead to homelessness will not be resolved merely by the return of warmer weather. “During extreme cold, people are very alarmed about potential freezing deaths, frostbite, cold injuries, worsening of other chronic health conditions,” she says. “But I could list alarming things for July as well. The positive thing is that cold weather becomes a special effect in the media in particular. It makes the situation look dire, and it is, but it has been dire all year long.”

“It’s interesting from a faith-based perspective,” Ms. Hocking says. “How does the church be the church with people experiencing real trauma every day from the city, the cold and everything else?” She suggests trying things as simple as having extra coffee ready, putting snacks out and making sure that rather than “walk right by people going into church, they’re welcomed in as well, not just because it’s cold but because we want them there."

Creating these encounters would do a lot to address the gap between homeless people and the city, Ms. Hocking says, adding that many homeless people she works with every day are good citizens and would make good neighbors. “When we figure out the disconnection between us, socioeconomically, that will help [end] this problem.”