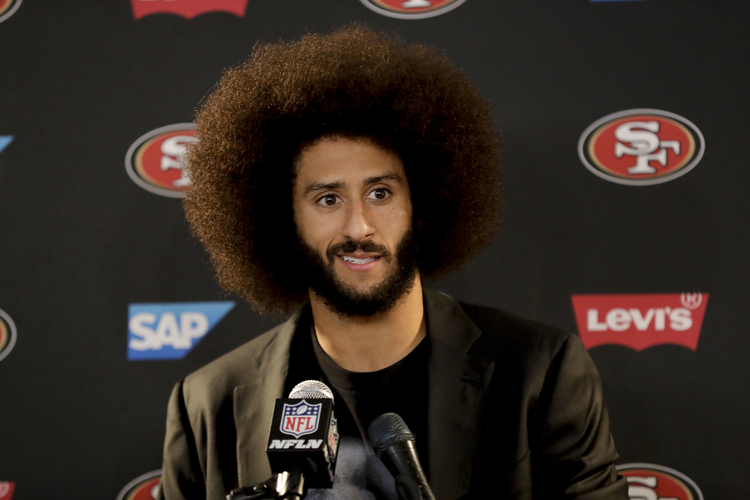 Former 49ers quarterback Colin Kaepernick, seen here in December 2016, has accused both the N.F.L and President Trump of acting to deprive him of employment. (AP Photo/Rick Scuteri)

A little more than a year ago, Colin Kaepernick, then quarterback for the San Francisco 49ers, first took a knee to protest racial injustice. The impact of Kaepernick’s actions on this nation’s progress toward racial equality may never be discerned, but the debate he sparked about appropriate behavior during the playing of the national anthem has spread throughout professional, collegiate, high school and even grade school sports, and it raises questions about the legality of certain actions taken by President Donald J. Trump.

The unanswered question is whether the actions of our current president amount to unconstitutional suppression of speech.

Mr. Kaepernick recently filed a grievance against the National Football League (N.F.L.) and team owners accusing them, and “the Executive Branch of the United States government,” of colluding to deprive him of employment. (The 29-year-old Kaepernick opted out of his contract with the 49ers at the end of last season; despite his availability, no other team tried to sign him.) The grievance is a simple contract claim that can only determine whether the N.F.L. and any its owners violated Mr. Kaepernick’s collective bargaining agreement rights. Nevertheless, Mr. Kaepernick’s allegation that the president and vice president are acting to deprive him of employment solely because he exercised his constitutionally protected right of political expression has broader implications for the nation.

President Trump has made public statements and published numerous tweets disparaging players who do not stand during the national anthem. As reported by The New Yorker, Mr. Trump spoke at a political rally in Alabama in September and asked the crowd:

Business Insider reports that in the month after he made that statement, N.F.L anthem protests became Mr. Trump’s second most tweeted-about topic. The following are just a few of his tweets and tweet threads:

If a player wants the privilege of making millions of dollars in the NFL, or other leagues, he or she should not be allowed to disrespect [...] our Great American Flag (or Country) and should stand for the National Anthem. If not, YOU'RE FIRED. Find something else to do!

Why is the NFL getting massive tax breaks while at the same time disrespecting our Anthem, Flag and Country? Change tax law! [Note: The NFL has not received federal tax “breaks” since 2015. But some teams may receive state and local tax relief or funding for stadiums, which led PolitiFact to rate the president’s claim “mostly true.”]

If NFL fans refuse to go to games until players stop disrespecting our Flag & Country, you will see change take place fast. Fire or suspend!

...NFL attendance and ratings are WAY DOWN. Boring games yes, but many stay away because they love our country. League should back U.S. [Note: The claim of falling ratings was judged “mostly false” by PolitiFact.]

On Oct. 8, Vice President Mike Pence and his wife left an Indianapolis Colts game after players on the opposing San Francisco 49ers team knelt during the anthem. Mr. Pence explained in a written statement that he “left today’s Colts game because President Trump and I will not dignify any event that disrespects our soldiers, our Flag, or our National Anthem.” Mr. Trump then tweeted, “I asked @VP Pence to leave stadium if any players kneeled, disrespecting our country. I am proud of him and @SecondLadyKaren.”

The First Amendment protects against government interference with free speech and expression. Thus, although a federal statute prescribes that, during the playing of the national anthem, all non-uniformed “persons present should face the flag and stand at attention with their right hand over the heart,” the First Amendment prohibits enforcement of this law. Nevertheless, private employers (and Catholic and other private schools) may, of their own accord, require their employees to stand during the anthem, as does the National Basketball Association. The unanswered question is whether the actions of our current president amount to unconstitutional suppression of speech.

Mere government criticism of protected speech does not violate the First Amendment. In Penthouse International, Ltd. v. Meese (1991), the federal D.C. Circuit Court of Appeals held that the U.S. Attorney General’s Commission on Pornography did not act unconstitutionally when it discouraged corporations, such as 7-Eleven, from selling Penthouse and Playboy magazines because the commission did not threaten prosecution or government sanction.

The Editors: Patriotism loses its meaning when it is used as a political weapon
The Editors

How the new Supreme Court term will impact the future of immigration, religious freedom and more
Ellen K. Boegel

In Okwedy v. Molinari (2003), however, the federal Second Circuit Court of Appeals held that a fax sent by a government official to a billboard owner indicating that certain billboard content “is not welcome in our Borough,” reminding the owner that he derives “substantial economic benefits” from the Borough, and calling on the owner to act “as a responsible member of the business community,” might violate the First Amendment rights of the billboard advertiser. “What matters is the distinction between attempts to convince and attempts to coerce,” the court decided. “A public-official defendant who threatens to employ coercive state power to stifle protected speech violates a plaintiff’s First Amendment rights, regardless of whether the threatened punishment comes in the form of the use (or, misuse) of the defendant’s direct regulatory  or decisionmaking authority over the plaintiff, or in some less-direct form.”

Thus, it is possible that Mr. Trump’s public and private statements, at least one of which referenced government action regarding tax laws, could be construed as unconstitutional coercion, but it is more likely that without additional evidence, a First Amendment case brought against the president would be dismissed, with his statements considered a lawful expression of opinion rather than a threat of government sanction.

Many states have laws granting a private cause of action for interference with a business or employment relationship. The federal government and its officials are immune from such suits unless immunity has been waived by the Federal Tort Claims Act. In Nixon v. Fitzgerald (1982), the Supreme Court determined that U.S. presidents are absolutely immune from monetary awards based upon unlawful actions taken while in office that are within the “outer perimeter” of the president’s duties. Disparaging the patriotism of private citizens is not a specified presidential duty, but an argument could be made that promoting patriotism is within the outer perimeter of those duties. Thus, it is highly improbable that a state-law-based civil lawsuit against Mr. Trump would be successful.

Patriotic pageantry as a job requirement

Private employers are free to impose workplace rules and fans are free to stop buying tickets or to safely burn jerseys emblazoned with the names of players they dislike. The current controversy surrounding appropriate behavior during the playing of the national anthem, however, raises deeper questions about the meaning of patriotism and the propriety of forced displays of patriotism.

As Justice Jackson stated in West Virginia State Board of Education v. Barnette (1943), “[i]f there is any fixed star in our constitutional constellation, it is that no official, high or petty, can prescribe what shall be orthodox in politics, nationalism, religion, or other matters of opinion or force citizens to confess by word or act their faith therein.” The Barnette case decided that public schools may not require students to salute the flag or recite the Pledge of Allegiance, but Justice Jackson’s statements regarding forced patriotism are instructive here. “To believe that patriotism will not flourish if patriotic ceremonies are voluntary and spontaneous instead of a compulsory routine is to make an unflattering estimate of the appeal of our institutions to free minds,” he wrote. More bluntly, coerced patriotism belittles true patriotism.

Colin Kaepernick and Damontre Moore, who recently was cut from the Dallas Cowboys, possibly for raising his fist while the anthem was played, have stated they mean no disrespect for members of the U.S. military and are simply protesting racial injustice and violence by police. Their actions, and those of like-minded Americans, force us to consider whether “dissent is the highest form of patriotism.”

Their actions, and those of like-minded Americans, force us to consider whether “dissent is the highest form of patriotism.”

Someone should tell Kaepernick and the others protesting during the national anthem that police brutality is a bogus issue. Interesting why that hasn't happened. Or maybe it has and it doesn't matter. Changes in sentencing guidelines may get bi-partisan agreement though not all.

No team wants to hire Kaepernick because it would be financial suicide. It will be interesting to see what happens when teams start bleeding money and cut salaries or reduce salary offers.

Maybe the Ms. Boegel should include all the successes the Trump administration has had in getting judicial nominees approved. Especially those whose legal views are friendly to religion.

footnote - the link Ms. Boegel provides essentially shows the quotation she uses is recent and spurious.

The link provided attributes the first use of the phrase "dissent is the highest form of patriotism" to a 1961 Friends Peace Committee publication. 1961 is recent for some and distant for others. The link, which comes from the Thomas Jefferson Foundation, indicates attribution of this quote to Thomas Jefferson is spurious. The quote itself is not spurious.

Some obscure person said it 50+ years ago. John Lindsay used it later. That is not a basis for making an assertion about what "dissent" is about.

I certainly agree with the proposition that people must be allowed to dissent but rarely would I call it the highest form of patriotism because then you could use it to praise Antifa or the Neo Nazi's or the numerous successful attempts to shut down discussion on campuses. It is rarely a form of patriotism especially when it is in support of a bogus point of view such as the one Colin Kaepernick has taken.

Point well taken that the nature and content of one's dissent is essential to its relationship to patriotism.

Point well taken that the nature and content of one's dissent is essential to its relationship to patriotism.