How the new Supreme Court term will impact the future of immigration, religious freedom and more

How the new Supreme Court term will impact the future of immigration, religious freedom and more 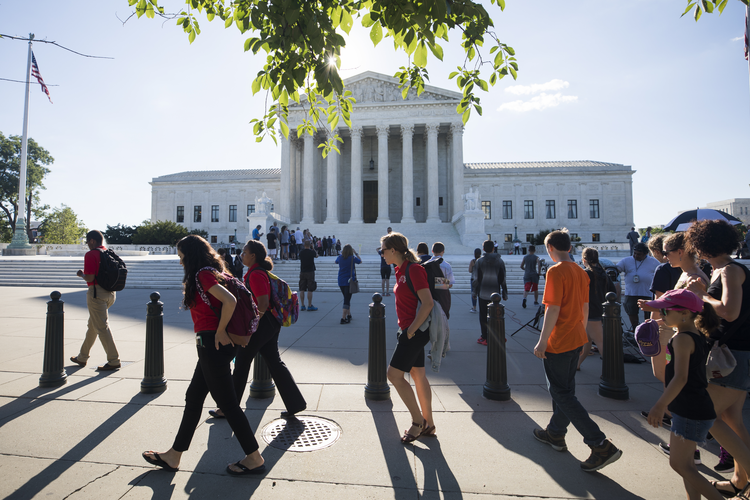 The Supreme Court starts its new term on Oct. 2 with a full complement of justices. The court is scheduled to hear cases relating to immigration, religious freedom, federalism, voting, employee rights and federal court jurisdiction over foreign governments and corporations. New cases will be added as the term progresses.

Immigration.  Litigation concerning sanctuary cities and President Trump’s decision to end the Deferred Action for Childhood Arrivals program may find its way to the Supreme Court before the term ends in May, but these cases are in their early stages and may be resolved without recourse to the high court.

In the travel ban cases, Trump v. Hawaii and Trump v. International Refugee Assistance Project, the court is asked to decide under what circumstances the president may deny entry to refugees and citizens from specified countries. Congress has given the president broad powers to prevent noncitizens who are “detrimental to the interests of the United States” from entering or remaining in the country, but two lower courts, the Fourth and Ninth Circuits, determined that this authority is limited by the First Amendment’s protection against religious discrimination. Since those decisions were issued, the Supreme Court granted the Trump administration’s request for a partial reinstatement of its travel ban on refugees and visitors from six majority Muslim countries. The case is scheduled for oral argument on Oct. 10.

Two other immigration cases are being reheard after the court failed to issue decisions in them last term. The cases were first argued before Justice Neil M. Gorsuch took the bench. The rehearings indicate the court was split 4-to-4 and Justice Gorsuch’s vote will determine their outcomes.

The Supreme Court could issue a landmark ruling that would give guidance on the degree to which religiously motivated businesses are permitted to opt-out of state and local regulation.

Sessions v. Dimaya involves the Fifth Amendment’s void for vagueness doctrine, which requires criminal statutes to be specific enough that ordinary people can understand what is prohibited. The justices must decide whether language similar to that considered too vague to enhance criminal sentencing is specific enough to justify deportation. In Jennings v. Rodriguez, the Supreme Court will review a Ninth Circuit determination that detained aliens are entitled to bond hearings every six months to determine whether they are either dangerous or flight risks.

Religious freedom, L.G.B.T. rights and free speech.  Masterpiece Cakeshop, Ltd. v. Colorado Civil Rights Commission has religious freedom implications but has been framed primarily as a free speech case. The controversy stems from Colorado’s imposition of a civil penalty on a professional baker who refused to make a cake to celebrate a customer’s same-sex marriage celebration.

The baker argues that his cakes are artistic expressions (i.e., speech) and that forced speech is unconstitutional. He also claims Colorado discriminated against his religiously motivated refusal to bake a same-sex marriage cake but upheld the right of other bakers to refuse to make cakes with derogatory messages.

The Supreme Court could decide the case solely on free speech principles or it could issue a landmark ruling that would give guidance on the degree to which religiously motivated businesses are permitted to opt-out of state and local regulation.

Federalism.  Christie v. NCAA pits a federal law that prohibits states from enacting new legislation authorizing sports gambling against the power of the states under the 10th Amendment, which reserves to the states and people all powers not bestowed upon the federal government. The decision will have tremendous economic and social implications for local governments and sports enthusiasts. Any ruling that expands states’ rights would have implications for the federal government’s ability to punish sanctuary cities and states.

Voting rights.  The court will hear several voting rights and gerrymandering cases this term. Preparations for the 2020 census are beginning, but several states still have not created legally acceptable districts based on data from the 2010 census. Several Texas redistricting plans have been found by lower courts to be racially discriminatory, yet the Supreme Court is permitting the state to continue to use those districts while the state’s appeal to the Supreme Court is pending. This means Texas has used improperly drawn districts for every election since the 2010 census, including the looming 2018 elections.

Last year, the Supreme Court held that North Carolina had engaged in racially discriminatory redistricting. The state has redrawn its maps, but they could be challenged, and the Supreme Court may yet be called upon to intervene before the 2018 elections.

In Gil v. Whitford, a case emanating from Wisconsin, the court will examine politically motivated gerrymandering and, it is hoped, set forth a workable standard for legislatures and courts to determine to what extent, if at all, political partisanship can play a role in structuring voting districts. A decision in the Gil case will affect partisan gerrymandering cases from Maryland, North Carolina and Pennsylvania.

In Husted v. A. Philip Randolph Institute, the court will review the process a state may use to keep its voter rolls current. Federal law prohibits the removal of voters from registration lists simply for their failure to vote, but Ohio uses non-voting as a trigger to initiate a notification and removal process. The lower court held that Ohio’s process violated federal law. The court’s decision to hear the case is a good indication at least four justices disagree with the lower court.

Employee rights.  In three consolidated cases that will be heard under the name Epic Systems Corp. v. Lewis, the Supreme Court will determine whether individual employment contracts that require employees to resolve disputes with their employers via arbitration are unenforceable because they contravene the power to take collective action guaranteed by the National Labor Relations Act. The Obama administration fully supported the employees who seek to invalidate the arbitration clauses of their contracts. The Trump Justice Department reversed course and filed a brief supporting the employers, but the National Labor Relations Board, an independent federal agency, filed a brief on behalf of the employees.

Is voting a public or a private act? (Your ballot is not as secret as you think)
Ellen K. Boegel

Digital Realty Trust v. Somers involves a Securities and Exchange Commission regulation that extends statutory whistleblower protections to employees who report misconduct to their supervisors but not to the S.E.C. itself. The employer claims the S.E.C. overreached its statutory authority. Under the Obama administration, the S.E.C. supported the employee when the case was before the Ninth Circuit. Thus far, the Trump administration has not taken a stand.

Foreign Governments and corporations. Jesner v. Arab Bank, PLC will decide whether foreign corporations can be sued in the United States for violations of international law, such as human rights abuses, terrorism and genocide.

In Rubin v. Islamic Republic of Iran the court must decide when assets owned by foreign governments but located in the United States may be seized to compensate victims of state-sponsored terrorism. The U.S. government is urging a limited ruling to protect its international relationships and overseas assets.

I have yet had it explained to me why Immigration is good for America
and why Un-Documented Immigrants are not seen as people who compete
with the poorest of Americans for work. Now you may not want that job,
and few others might want, but those in dire need of work might, but they
will not be paid a living wage when immigrants can and will take the job ?
A fair and just immigration policy seems as far away now as it did
decades ago.

I don't see how the Constitution applies to any non-citizen outside the
United States.

No one should be forced to do business with someone who wishes to
use their product for what they consider an immoral or un-ethical
activity. Few businesses can keep track of what happens to their product
or service, but that does not mean that right is expunged from the Constitution.

The whole "Arbitration" aspect of employment is a scam. The Arbiter is
hired by the company and knows what side of the bread is buttered
and by whom.