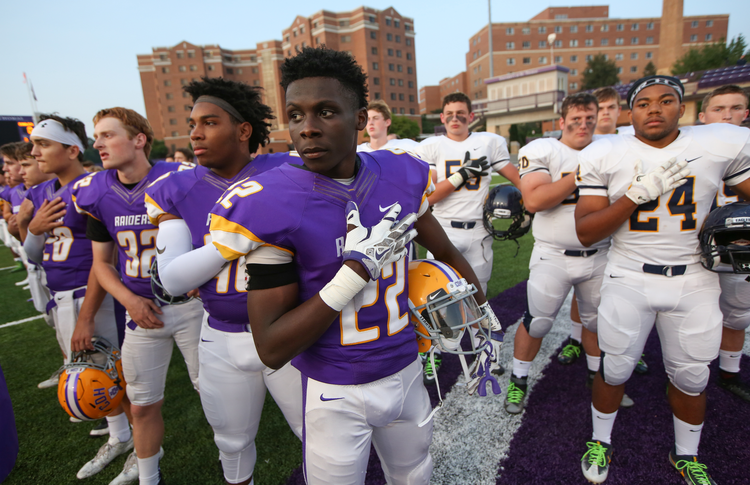 Football players from Cretin-Derham Hall High School in St. Paul, Minn., and Totino-Grace High School in Fridley, Minn., stand at midfield for the national anthem before their game Aug. 30 at the University of St. Thomas in St. Paul. (CNS photo/Dave Hrbacek, The Catholic Spirit)

WASHINGTON (CNS) -- Kneeling during the national anthem as a form of protest of racial injustice has been a hot topic for professional sports teams and the president of the United States, but it also has played out on Catholic high school sidelines as well.

The discussion about what Catholic high school players can and can't do during the singing or playing of the national anthem has involved not only pregame locker room talks but also school community sessions with parents, and in some cases, diocesan directives.

Lansing Catholic High School in Lansing, Michigan, went back and forth on what to do with players planning to "take a knee" during the anthem, which four of them, including the starting quarterback, did during the Oct. 6 homecoming game. The players were not allowed to play for much of the first half, but they were not benched for the entire game as had been predicted.

Just before the anthem, a prayer was read over the loudspeaker reflecting some of the school's tensions.

“Just before the anthem, a prayer was read over the loudspeaker reflecting some of the school's tensions.”

The Lansing State Journal quoted the prayer in part: "We need your grace to overcome all division and all anger, all bigotry and all hatred. The absence of physical violence does not mean the automatic presence of peace. Authentic peace is a gift from you that must be cultivated in human hearts."

At Bellarmine College Preparatory School, a Jesuit school in San Jose, California, about 12 players knelt during the anthem prior to the Oct. 6 game surrounded by players who chose to stand. The players who took a knee spoke to school administrators, teammates and coaches about their decision prior to the game.

In a letter to the school community, they described their action as a peaceful protest and said they felt "compelled to raise awareness for the marginalized."

"By kneeling, we hope to express our dissatisfaction with our society's failure to uphold the values of justice, equality, and peace, and start constructive dialogue in our community," they wrote.

School officials let the opposing school's team, Junipero Serra High School in San Mateo, California, know about the planned action during the anthem. Serra's football coach, Patrick Walsh, told The Mercury News that high school coaches have all been dealing with this issue and it's "not as cut and dry as some people might think."

“By kneeling, we hope to express our dissatisfaction with our society's failure to uphold the values of justice, equality, and peace.”

"These are teachable moments. This a great opportunity for us to teach a really deep life lesson," he said, noting that the ultimate decision is not up to him about what players should do. The conversation is happening, he said, and he told his team "the only thing that's a guarantee is it's divisive."

National anthem protests got started in 2016 with then-San Francisco 49ers Colin Kaepernick, who initially sat during the anthem and then began to take-a-knee with fellow teammate Eric Reid. "I am not going to stand up to show pride in a flag for a country that oppresses black people and people of color," Kaepernick told NFL Media last August.

In a Sept. 25 opinion piece in The New York Times, Reid said it baffles him that this protest "is still being misconstrued as disrespectful to the country, flag and military personnel. We chose it because it's exactly the opposite. It has always been my understanding that the brave men and women who fought and died for our country did so to ensure that we could live in a fair and free society, which includes the right to speak out in protest."

The silent protest by NFL players has been criticized by President Donald Trump, who said players should be required to stand during the anthem and fired if they didn't. And Vice President Mike Pence left a football game between the Indianapolis Colts and the 49ers Oct. 8 after some players knelt during the anthem, saying he did not want to "dignify" this action.

In an Oct. 11 tweet, Trump said NFL Commissioner Roger Goodell had ordered all players to stand during the anthem, but a statement issued the same day by the NFL did not confirm this move and said there would be continued discussion of the issue at the owner meeting the following week.

"The NFL is doing the hard work of trying to move from protest to progress, working to bring people together," the statement said.

Coach Patrick Walsh: “This a great opportunity for us to teach a really deep life lesson.”

After the president's initial comments against kneeling players during a Sept. 22 rally he had in Alabama, NFL teams responded in force with players taking a knee, locking arms or not coming to the field until the anthem was over.

"What can happen at the high school level is they can see something happen in the news or professional athletes do something, and they just kind of mimic it," said Adam Pribyl, the athletic director of De La Salle High School in Minneapolis. "Then it loses the intent of what some of those protests are."

He told the Catholic Spirit, archdiocesan newspaper of St. Paul and Minneapolis, that school officials talked about this last year "before it blew up because we wanted to be on top of it, in case it happened." Forty-five percent of De La Salle High School's athletes are students of color.

Some schools, like St. Agnes in St. Paul, Minnesota, which has 25 percent of the students in athletics are non-white, have an unwritten policy that all students and coaches will stand for the anthem, said Mike Streitz, athletic director.

Cristo Rey Jesuit High School in Minneapolis, where the student body is 84 percent Latino and 11 percent African-American, has a different take on the issue.

"If a student feels compelled to participate in honoring the national anthem or if that student chooses to address the anthem in a different, but respectful, manner by not participating in standing for 'The Star-Spangled Banner,' we support that student," said Robert Carpentier, Cristo Rey's athletic director.

“We are not public institutions and free speech in all of its demonstrations, including protests, is not a guaranteed right.”

Some schools, like three diocesan high schools in the Diocese of Rockville Centre, New York, have the decision made for them. A letter sent to school principals in late September from the diocese said students and spectators cannot kneel or otherwise protest during the playing of the national anthem before games and at other school events and doing so could result in serious disciplinary action.

The Diocese of Camden, New Jersey, issued a similar directive last year saying any student who failed to stand for the anthem at a sporting event would be suspended for two games and repeated offenses could get students dismissed from the team.

Mary Boyle, school superintendent for the diocese, said in a letter to school principals that the "best approach is helping our young people understand that blood was sacrificed so that we all can enjoy the gifts of our faith and our country."

"However, let me be clear," she added. "We are not public institutions and free speech in all of its demonstrations, including protests, is not a guaranteed right."

Contributing to this report was Matthew Davis on the staff of The Catholic Spirit, newspaper of the Archdiocese of St. Paul and Minneapolis.