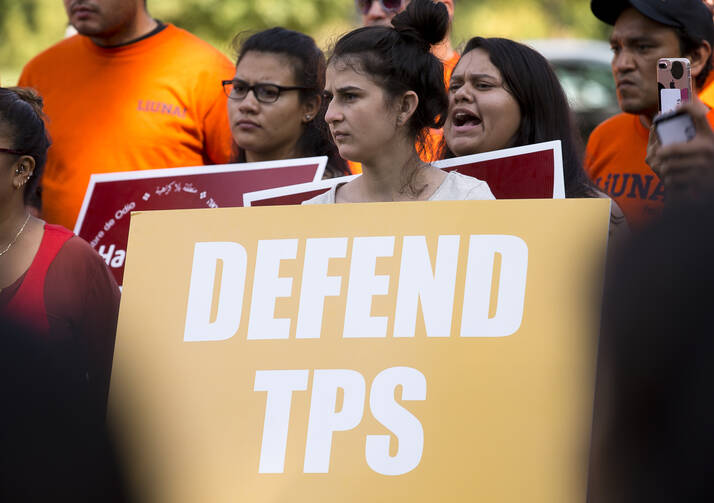 When he was 5, Mario Miranda’s family were forced to leave their rural village in El Salvador. It was 1980, and a civil war had broken out between a military-led government and coalition of guerrilla groups in his country. They had to find a safer place to live. Two decades later, desperate to provide for his family, Mr. Miranda was forced to move again and came to the United States.

Despite his lack of documentation, he was granted Temporary Protected Status and allowed to remain in the United States after a 7.6 magnitude earthquake rocked El Salvador. Established by Congress through the Immigration Act of 1990, T.P.S. is granted by the Department of Homeland Security to accept those whose home countries are suffering from ongoing conflict, environmental disasters or other unsafe conditions and protect them from deportation.

Around 200,000 Salvadorans and 57,000 Hondurans have been residing in the United States for more than 15 years under T.P.S. But that protected status is set to expire for immigrants from both countries in 2018.

D.H.S. has until Jan. 8 to extend the T.P.S. designation for Salvadorans. D.H.S. has delayed a decision on T.P.S. for Hondurans until July 5.

“I am not ready to return to my country,” says Mr. Miranda, who explained that $10 a day is a typical wage in El Salvador. “We’re hoping this man opens his heart,” he says of President Trump. In September the Trump administration extended T.P.S. for immigrants from South Sudan but also announced it would terminate the program for immigrants from its neighbor Sudan on Nov. 2, 2018.

Around 200,000 Salvadorans and 57,000 Hondurans have been residing in the United States for more than 15 years under Temporary Protected Status. But that status is set to expire in early 2018.

A report released by the U.S. Conference of Catholic Bishops on Oct. 17 suggests that it is still not safe for Salvadorans and Hondurans to return to their native country. It notes ongoing forced displacement due to violence and other factors. The bishops say these countries are not ready to receive an influx of returning expatriates.

“There is ample evidence to suggest that current T.P.S. recipients from Honduras and El Salvador cannot return safely to their home country at this time,” Bishop Joe Vásquez of Austin, Texas, chair of the U.S. bishops’ migration committee, writes in a letter introducing the report. The conference sent a delegation to El Salvador and Honduras in August.

Auxiliary Bishop David O’Connell of Los Angeles, who made the Central American trip, says there are 500,000 people living in barrios in El Salvador completely under the control of gangs.

“All family life has broken down. There’s a terrible amount of suffering going on,” he says.

Bishop O’Connell, who as a priest served parishes in South Los Angeles, pointed out that some prominent Central American gangs, like 18th Street and Mara Salvatrucha, began in Los Angeles. “They are the ones who have taken over in these neighborhoods, cities and towns.”

Undocumented children who arrived unaccompanied report being threatened and tortured by gangs, Bishop O’Connell says. Their family members also were tortured, kidnapped and some were murdered by the gangs seeking ransom money or violently recruiting new members.

“If T.P.S. is not renewed, they are going to be in danger. These countries cannot handle the current population, much less people coming back,” Bishop O’Connell says. Those who come back will be gang “targets,” he says. Having been in the United States, gangs will assume they have money or the gangs will kidnap them and extort money from their friends and family in the United States.

“These are our community members. They are here, following the law,” says Ashley Feasley, director of migration policy and public affairs at the U.S. Conference of Catholic Bishops. “There will be family and community consequences if we don’t find a solution. It will affect a lot of people, a lot of businesses.”

D.H.S. canceled T.P.S. for more than 50,000 Haitians living in the United States in November, giving recipients until July 22, 2019, to leave the country.

“I have been surrounded by good people in the United States,” says Mr. Miranda, whose status is scheduled to expire on March 9, 2018. “We are farmers. It’s ridiculous to say we’re all delinquents,” as some native-born Americans who have been critical of migrants from Central America have said.

“You have to work in this country,” says the Salvadoran. Mr. Miranda works as a custodian at a school in Maryland and sends money to his wife and child in El Salvador every 15 days.

About his chances to stay in the United States and to continue to support his family back home, “I am hopeful,” Mr. Miranda says. “Hope is always the last thing you lose.”

Update: Dec. 26, 2017; this article has been updated to reflect recent developments.

Nikhil Sharma posting down below is a Spambot. If the powers that be can, please block this bot from this site as it mines info on users here.

Under Obama, only 70 out of 121 Central American "surgees" were deported because they've exhausted their legal proceedings and were found not eligible for asylum. This number is minuscule compared to the Millions of Illegal Aliens to be deported.

Update: 3/12/16 DHS has arrested 336 of the "surgees" that have exhausted their legal options. Let's see how many of them will be deported.

It has been proven that these continuing "surges" are not fleeing any uptick of crime, violence, gang activity. They were promised "permisos" from their clergy and media. Due to Obama's lax immigration policy, they believe this to be true. Not mentioned that 70-90% of those released on "bond" or "security" bracelets do not show up for their legal proceedings. They just "disappear" waiting "in the shadows" for the next mass amnesty.

To non Catholic republicans and to Trump.....Catholicism has failed in north Latin America to produce low crime countries by its leavening power....which didn't work. Then on top of that failure, Catholicism starting with ccc 2267 in the 1990's wants soft punishments for murderers....actually just mentions custodial separation with free meals etc. To many, the Bishops don't want to clean up Honduras and El Salvador if it means executing gang murderers as Romans 13:4...the word of the Holy Spirit....says to do as the majority of history's Popes knew. Ergo...liberal articles convince liberals....and youngsters...some. Pope Sixtus V executed thousands of criminals in the Rome of the 16th century in submission to Romans 13:4 and Gen.9:5-6 perhaps. Our recent three pacifist-on-criminals....Popes...want their cake and eat it too....help the poor who are fleeing the chaos we enable by campaiging against execution. Brazil...50,000 murders a year.....China....11,000 murders a year with 7 times the population of Brazil. US Supreme Court after 4 years of comparing deterrence studies...death penalty stops not spousal but criminal murders. The magisterium is begging the liberal world to love it but it can't do that in sex issues....so parroting liberals on the death penalty is one alternative. We as a Church going forward will help kill ten of thousands of low income murder victims just in Brazil, Honduras, El Salvador and Mexico alone....by encouraging their own ill started anti death penalty laws. Absurdity rules the Vatican in this matter.

The article states these persons immigrated under grants of temporary asylum 15 years ago. the Legal question is whether these persons have applied for extended immigrant status by a showing of continued danger because of political oppression or natural disasters. Poverty and gang terrorism do not necessarily satisfy the requirements of the law. It seems the correct solution would be for Congress to amend the 1990 law to cover the situation.

It has been proven that these continuing "surges" are not fleeing any uptick of crime, violence, gang activity. They were promised "permisos" from their clergy and media. Due to Obama's lax immigration policy, they believe this to be true. Not mentioned that 70-90% of those released on "bond" or "security" bracelets do not show up for their legal proceedings. They just "disappear" waiting "in the shadows" for the next mass amnesty. http://www.uspsinfo.com